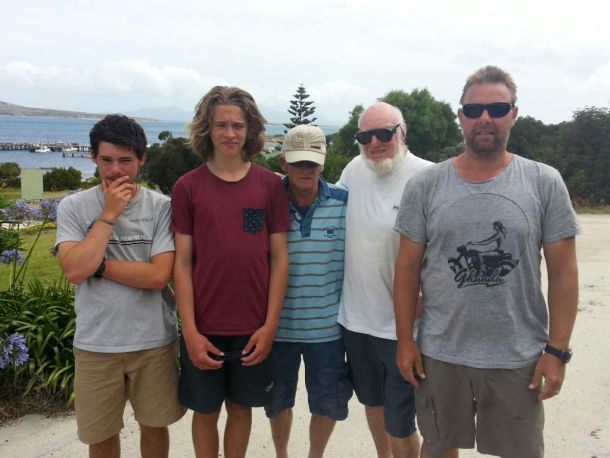 The rescued crew of Seduction near Furneaux Tavern at Lady Barron on Flinders Island.

The yacht SEDUCTION has run aground on the return journey from Hobart to Melbourne. All five crew who were onboard are safe and well. The ORCV Incident Management Team have confirmed the next of kin of all crew have been notified.

At approximately 0440 hours this morning Monday 5 January, 2015, SEDUCTION ran aground at Gull Island which is East of Cape Barren Island and South of Flinders Island, Tasmania. They were returning to Melbourne after competing in the ORCV 2014 Melbourne to Hobart ocean yacht race and they were on route to Lady Barron on Flinders Island.

The five crew onboard, Richard Nichols (owner/skipper), Sean Miles, Howard Hedley, Steve Dale and Sam Bostock-Young were rescued by the Flinders Island police boat at approximately 0640 hours this morning and are currently at the Furneaux Tavern at Lady Barron on Flinders Island.

SEDUCTION also activated their EPIRB which was detected by the Rescue Coordination Centre at the Australian Maritime Safety Authority (AMSA).

The yacht is currently still aground and investigations are under way regarding a salvage operation including minimising the impact on the environment.

Many thanks to the many marine rescue authorities involved and yachts in the area who offered assistance, particularly the Tasmanian Police on Flinders Island who did a fantastic job. Thanks also to the Furneaux Tavern at Lady Barron on Flinders Island, who always welcome yachties with open arms.

Our thoughts are with all those affected by this incident.

The ORCV Incident Management Team are continuing to liaise with the SEDUCTION crew and Rescue Authorities including the Tasmanian Police, to provide any assistance required.

The crew will be returning to Melbourne as soon as possible.

The attached crew photograph is after the boat finished the Melbourne to Hobart Westcoaster race.  NB not all this crew were on the delivery crew involved in this incident.