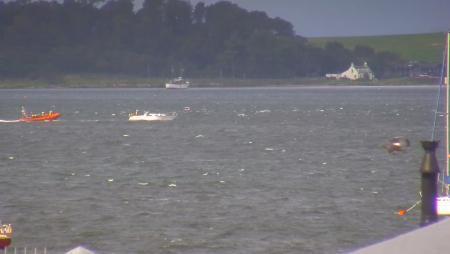 During the round Arran two handed yacht race on Saturday 31 August, a yacht with two persons on board suffered from a broken mast in an area one mile south of Little Cumbrae Island

With the yachts sails and rigging also in the water along with the mast, and near 50mph winds, a decision was made to tow the casualty towards Great Cumbrae Isle where some shelter could be found.

A lifeboat volunteer boarded the stricken vessel to ensure that none of the two crewmen had suffered any injuries, at the same time made fast a tow line.

Once in more sheltered waters with the use of the lifeboat’s bolt cutters the volunteer cut free the broken mast, sails and rigging which had fouled the rudder, causing steering loss.

Unfortunately it was not possible to recover any of the equipment.

Having cut away the rigging, steering was restored, the engine started enabling the yacht to make her own way back to Largs Yacht Haven escorted all the way by the lifeboat.

Late on Saturday 31 August at 11.59pm, the services of Largs lifeboat was called out to only one person on board reported to have grounded on Brigurd Spit near Hunterston.

As the lifeboat arrived it was established the lone sailor had no injuries, his vessel was intact it was towed into deeper waters and onwards to Largs Yacht Haven.