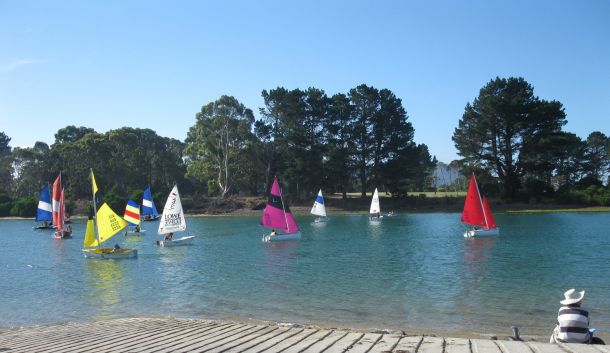 Wynyard Yacht Club, located on the north-west coast of Tasmania, has been rewarded for their contribution and work in their local area, winning the Community Club Award at the inaugural AIS Sport Performance Awards (ASPAs) in Melbourne last night.

The dedicated team at Wynyard Yacht Club, who also took out the Club of the Year Award at the 2014 Yachting Australia Awards last October, has adopted the Discover Sailing program and teaches adults, children and those with disabilities to sail, has doubled its membership, offers free equipment and building to community groups and mentors youth in their area amongst many other achievements.

John Rosser, one of the Volunteer Award winners at the 2014 Yachting Australia Awards, has had a long involvement with sailing through design, technology and officiating in Western Australia and was one of the three finalists in the Volunteer/Administrator Award at the ASPAs and we congratulate him on this achievement.

After last night’s Awards, Yachting Australia President Matt Allen praised the Wynyard Yacht Club saying, “The contribution and achievements of the club is outstanding and it’s a credit to them for making some tough calls to change what they were doing to secure their future.

“Not only have they increased the profile of their club and the number of participants sailing in their area, they have created strong bonds in the community through their work with many local groups and created a club where all people can come together and enjoy themselves, on and off the water.  We send our heartfelt congratulations to the club and everyone involved.

“Sailing, like all sport, is supported by the efforts of so many people who give their time, knowledge and enthusiasm so willingly. John Rosser, our finalist in the Volunteer category, is a great example. He has shared his love of sailing and helped clubs, associations, events and individuals to deliver better outcomes and results for many years and we congratulate him on this acknowledgement.

“We also thank the Australian Institute of Sport for their support of the leading athletes, teams and coaches, as well as recognising the important role that volunteers and clubs play in all sports across the country”, added Matt.