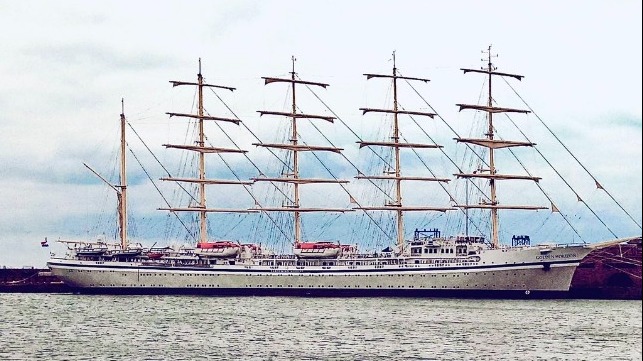 The world’s largest sailing ship was detained today at the Port of Dover in the UK hours before the passenger cruise ship was due to begin its maiden voyage. The arrest of the ship was the latest development in a long-running legal dispute between the Brodosplit Group in Croatia, that built the vessel, and the cruise line which originally ordered its construction.

At 8,770 gross tons and a length of 531 feet, the five-masted Golden Horizon is the world’s largest square-rigged sailing vessel and a near-replica of the 1913 built France II. The design features over 6,000 square meters of sail area, more than twice that of the famous Cutty Sark sailing ship, which was meant to keep the ship under sail up to 80 percent of the time. Her design speed is 16 knots.

Croatian media reports that the UK Admiralty court ordered the ship detailed at the Port of Dover after the vessel arrived today from a pre-inaugural travel industry event. Star Clippers of Monaco sought the order in a financial dispute with the builders, which continue to own the ship and chartered it to a newly formed company, Tradewind Voyages. She was scheduled to begin a series of cruises as part of the UK’s domestic cruise restart program before beginning a world tour.

For the full story, see: https://www.maritime-executive.com/article/world-s-largest-sailing-ship-detained-in-uk-due-to-legal-dispute