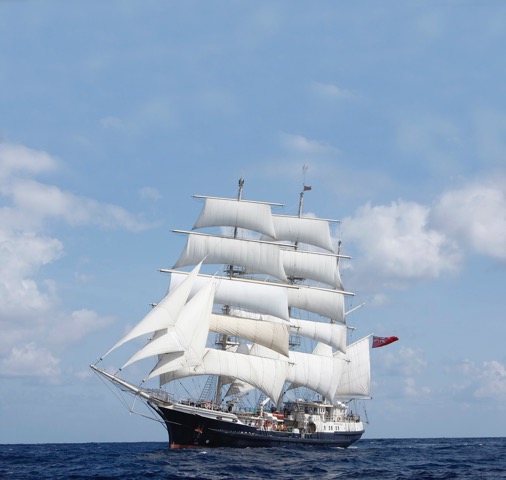 Spectacular British wooden sail ship, the STSTenacious, will be the official start boat for the 2017 Festival of Sails’ dramatic opening event, the Melbourne to Geelong Passage Race.

One of the highlights of the annual Festival, the 34 nautical mile Passage Race marks the official start of the regatta and will be held on Saturday, January 21. The spectacular event attracts huge crowds, as onlookers enjoy the wonderful opportunity to witness hundreds of boats of all sizes charge into Corio Bay. More than 200 boats will race, representing all divisions competing at the Festival.

Tenacious is the largest operative wooden ship in the world, at 65 metres length and with a mast height of 42 metres, and was built in the UK in 2000 by 1,500 volunteers, approximately half of whom were living with a disability. This unique ship was specially designed to accommodate anyone regardless of ability, and is sailed by a crew of 40 individuals, around half of whom are living with disability.

The ship has a number of special design features allowing anyone to play a full and active role as an equal member of the crew. The entire vessel is wheelchair accessible including the platforms up the mast and bowsprit; there are aids for the visually impaired like a speaking compass and deck ribs to find their way, and people with limited dexterity can even helm the ship with a joystick.

“It’s important for us to have an event that’s available to everyone; a festival where people of all abilities can take part.”

“Not only will this spectacular tall ship create an unforgettable moment as she arrives into Corio Bay in the Passage Race, while she’s in Geelong the public will also have the opportunity to come on board, experience the ship, meet the crew and support it in its important mission,” he said.

Tenacious will be open to the public on Cunningham Pier, in Geelong on Sunday January 22 between 10am-4pm. Tours of the ship will cost $5. Corporate Sail days are available on January 23 and 24, and tickets are also available to sail on the ship from Geelong to Melbourne on January 25.

Tenacious is owned and operated by The Jubilee Sailing Trust, a UN-accredited charity that has led the way on the issue of social inclusion for nearly forty years. Tenacious has been in Australia since late July after an epic nine-month, 18,000 mile voyage from the UK, which has seen her sail across the Atlantic via Antigua, navigate the Panama Canal and pass through the islands of the South Pacific, including Tahiti and Fiji, before passing through Sydney Harbour last month.

Harry Cator, Chairman of the Jubilee Sailing Trust Australia, said, “More than four million Australians are living with some form of disability. Our mission is to encourage people living with disability and able-bodied people to come together to achieve something truly inspiring: sailing a tall ship as equal members of the crew.”

The Festival of Sails sees a feast of first class racing as Australia’s finest sailors battle for trophy honours on Corio Bay and more than 100,000 people flock to the foreshore annually for the live entertainment, market stalls, family activities and carnival atmosphere.