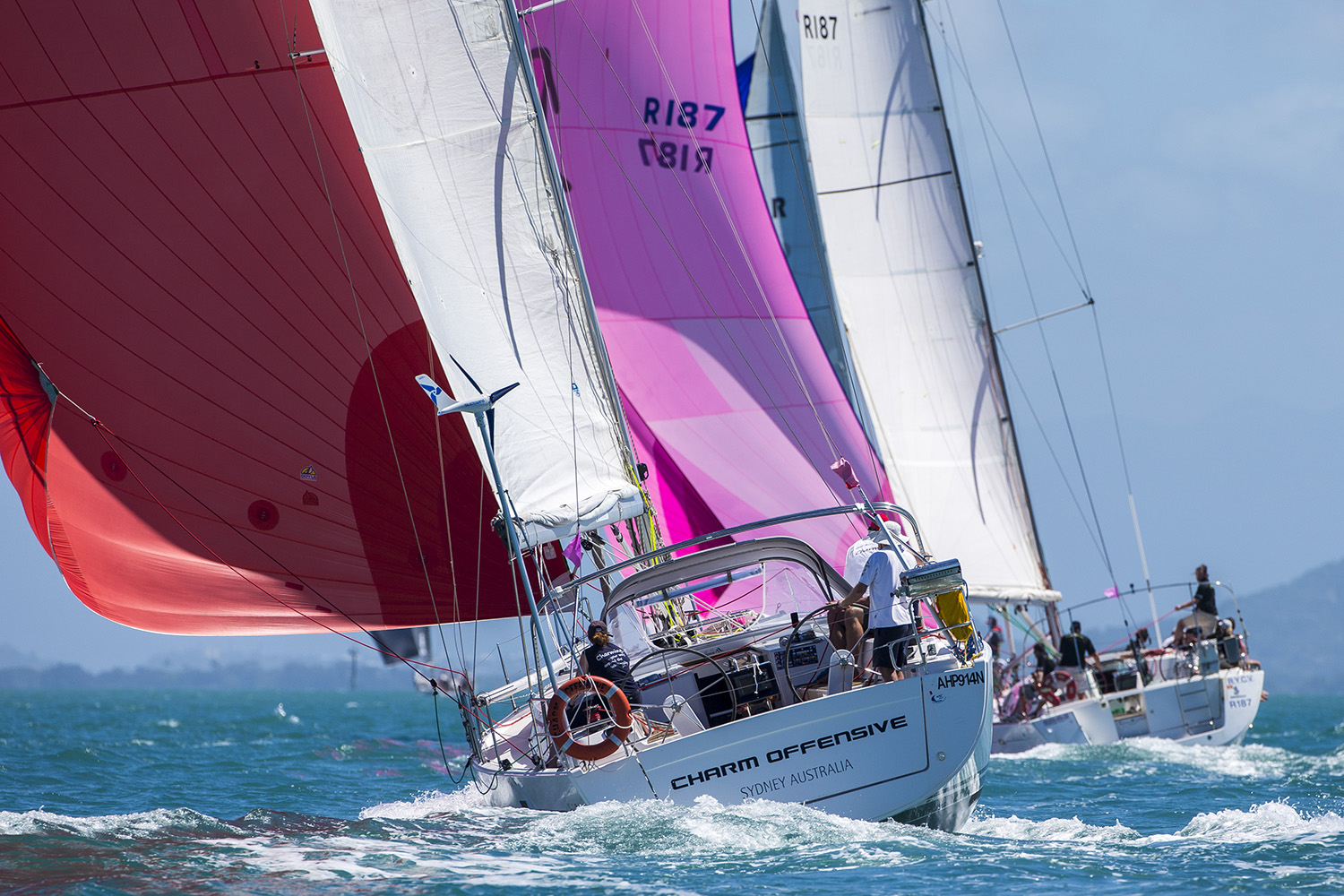 It was literally champagne sailing on the opening day of Townsville Yacht Club’s Sealink Magnetic Island Race Week, when on a slow downwind slide, the Pommery champagne corks popped on local, Mal Pirret’s appropriately named ‘Champagne’, and glasses were handed to those on the rail, who sipped as they took in the scenery.

As it is the 10th anniversary Race Week, everyone is in a celebratory mood. A sea shanty was being sung by a crew member on Ron Knott’s Callista and aboard Donna Dewhurst’s local boat, Soul Sister, the ladies were having lots of fun and made sure all those around them knew.

After racing, champagne was also being sipped aboard Peter Lowndes’ and Sarah Goddard-Jones’ Wine Dark Sea, by all but their two cats, Smudge and Noodles, who are along for the ride. Also aboard is triple Olympian, Karyn Gojnich and her 22 year-old daughter Amy.

“They (the cats) didn’t help or hinder, they were pretty quiet,” said a bemused Gojnich after their second overall in the IRC & Performance Racing division, amid laughter from the crew this afternoon.

Another crew member chipped in: “They did come out for a photo call when the paparazzi came looking for them this morning,” she said, insisting they helped in the pit and with spinnaker drops.

Aboard Stanley Barnes’ Librian, the crew headed out to the course dressed to kill in goddess type attire.

Conditions were, well, pretty perfect, according to Antipodes of Sydney’s owner, Greg Newton, who is a first-timer to Sealink Magnetic Island Race Week.

“We’re all old friends on this boat – the average age is 60 and we’ think the regatta is awesome.

We didn’t have a good run due to bad kite sets etc., but on the way back, we picked a good shift and picked up. I think we came in around fourth on line – we should look OK on handicap,” said Newton, whose son Sam is in Bermuda with the Oracle Team USA America’s Cup crew.

“The weather is perfect and with Denis Thompson officiating, it is very professional,” he said of Sealink Magnetic Island’s Principal Race Officer.

Elena Nova charterer, Andrew Pearson, won IRC, PHS and line honours. Pearson said this afternoon, “We are probably referred to as the ‘B’ team, (by owner Craig Neil who is on board). Craig was giving us valuable advice, but the star of the day was Clinton Evans, because he got all of the navigation and tactics right in the 8-12 breeze we sailed in.

“Clinton’s been told to step up to tactics because we’ve got a new bowman in 16 year-old Leo McAllister, who’s just returned from the Yngling Worlds in Austria. He did a fantastic job as a youngster and we’re very happy with our result. We have a harmonious crew who are full of fun, but they are all capable hands too,” Pearson ended.

Racing continues tomorrow from 11am. The fleet is represented by boats from Queensland, Victoria, NSW, Tasmania and South Australia.