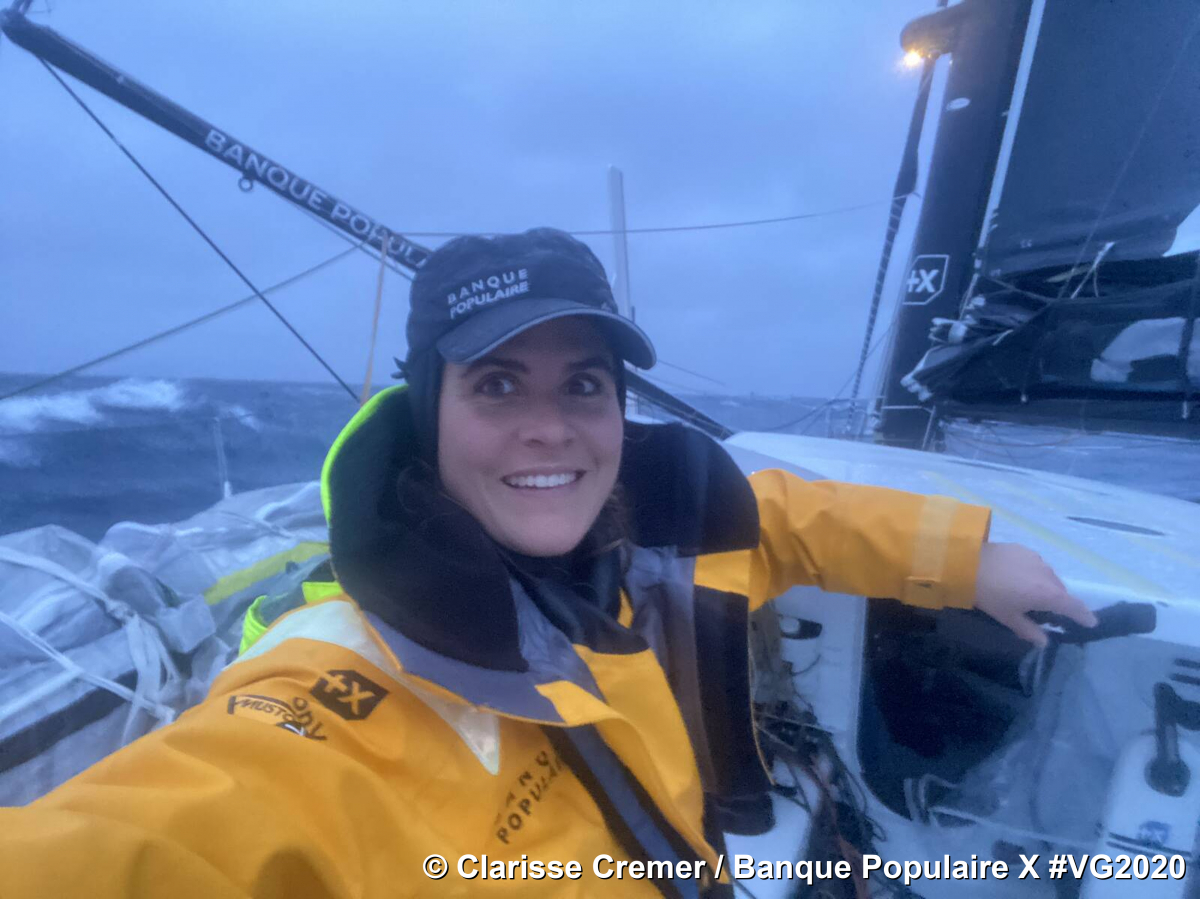 Rested and fully energised in beautiful sunshine, climbing north up the South Atlantic, the mercury rising and sailing in a moderate breeze, Vendée Globe leader Yannick Bestaven’s strategic choices may prove better than his off-key rendition of a Jonny Hallyday classic, but with a margin of over 170 miles – and at times peaking at over 20 knots earlier today, the 48-year-old skipper of Maître Coq IV had every reason to be in full voice in a video he sent today.

The weather modelling is quite unreliable where the race leaders are – as they proved on the descent of the Atlantic some five weeks ago – but there seems to be a chance that Bestaven might be able to wriggle out of a high pressure system and escape from his pursuers on a small depression which would sling shot him north. The next 48 hours will be key.

At the same time as Bestaven was lapping up the sunshine, enjoying the benefits of leading the fleet into escalating temperatures, 750 nautical miles behind Germany’s Boris Herrmann was wrestling with some of the toughest moments of his race on SeaExplorer – Yacht Club de Monaco. At some 150 miles from his fourth racing rounding of the Cape, Herrmann tore the leech of his mainsail and so had to sail all the way past the horn only under his J3 – small headsail, dropping to be 10th at the Cape, the passage of which, he reported later, he hardly noticed in the 40-45 knots winds.

Exhausted after the marathon repair, Herrmann reported late this afternoon, “I am happy to have got around the Horn but I hardly noticed it. I was just fully focused on repairing my mainsail. South of Cape Horn at 140 miles something like that I knew there was quite a bit of wind coming, 45-50 and I was going down through the sequence J3 and two reefs and was about to take the third reef and the leech of the sail caught the shrouds.”

He explained, “Luckily I was able to repair it. And that makes me really happy. It was complicated because it was structural, I had to dry and clean two layers up there in 45 knots of wind, it was pretty hairy on deck and I suppose it was well intentioned, but I finished today in the sunshine in the Atlantic. And now it is finally great to be in the Atlantic, sunshine, lighter winds and blue skies. And I have a mainsail up and that is just great.”

From early this morning there was an unprecedented number of boats passing Cape Horn in short order. Four solo skippers passed Cape Horn in a period of less than four hours. Between 0240hrs UTC on Monday morning when Damien Seguin (Group APICIL) rounded and 0401hrs Tuesday morning when Isabelle Joschke (MACSF) rounded in 11th, eight IMOCA skippers rounded the famous Cape Horn and passed back into the Atlantic after over one month in the Southern Oceans.

At 0016hrs UTC last night it was the first Horn rounding in the career of Maxime Sorel (V and B Mayenne), 3hrs and 58 minutes after Jean Le Cam whose seventh time it was. Italy’s Giancarlo Pedote (Prysmian Group) rounded 55 minutes later at 0112hrs to become the first non-French skipper in ninth.

At 0227hrs UTC Boris Herrmann of Germany fighting his problems made his fourth racing passage of his career rounding in tenth position on Seaexplorer-Yacht Club de Monaco, 1hr and 15 minutes after Pedote.

Then at 0401hrs Isabelle Joschke crossed Cape Horn for the first time in her ocean racing career. Racing MACSF she was just 1hr and 34 mins behind Herrmann.

Second placed Charlie Dalin (Apivia) took time to reflect on the two different worlds, after his first time in the Southern Ocean: “The big South is a special place. It's hostile, there is always sea, wind, more wind than you think. The wind is heavy, powerful because it is cold. It was a great experience: the permanent change of time and the tiredness, the depressions which follow one another, it is a jumble of feelings to be in the middle of nowhere, far from any civilization. I spoke to a fishing boat at the beginning of the Indian ocean, it was the only one that I met in the whole South.

“Right now the contrast is stark like when I spoke with the lighthouse keeper a the Horn, I saw a British RAF plane that flew over me, and now the maritime traffic reappears. It is reminiscent of the movie Waterworld. I feel like I'm coming back from a water world where the land was a fantasy. I come back from another planet. I've been through things that I wouldn't have experienced anywhere else, obviously that will have an influence on me.”

Armel Tripon commented, “I'm less than 400 miles from Cape Horn, that's good! It's going to be a great moment, it's a big part of the trip, it's the end of the great south. For the past 4-5 days, it's been a bit tough, the conditions have not been easy, it's going to be good to have a calmer sea. There are still 30-35 knots, it's softening a little bit… Wait, no actually, it's a construction site, it's a mess, I'm surfing like crazy, I am getting stopped by waves in the opposite direction, I am getting hit in all directions. I didn’t have a lot of sail up, because it wasn't working for the boat. I wasn't very comfortable. But now I've raised a bit more sail up, and we'll see what happens when it's daylight!

“Up to Les Sables d'Olonne, there's going to be a lot of racing and, given the gaps, it's going to be a Solitaire du Figaro style finish. In 48 hours, there are going to be 10 boats! A lot of things are going to happen in the South Atlantic. Right up to the end, there will be a lot to play for. This Vendée Globe is a good vintage!

“I've rested thoroughly, that's the objective: to reach Cape Horn as well rested as possible. So, I'm having long nights, taking naps, reading books, I'm calm because I know that for what is coming ahead you have to be lucid, reactive and opportunistic. There will be a lot of moves to play.

“I've started counting down the food I have left, that's the critical point. I've even checked my fishing line! I had brought with me 80 days of food, and then some extra snacks, but it’s going to be tight for my meals.. I'll fish for sea bream! I eat a lot and it helps me sleep well.

“I'll look at the countdown to the finish later. I know that this part is long, I’ll focus on it after Brazil because the South Atlantic can be really long. There will be some upwind sailing with some calmer phases too. I'll look at it properly after I've hooked on to the trade winds as I approach the Doldrums. But I’m going to say that we'll arrive at the end of January!”