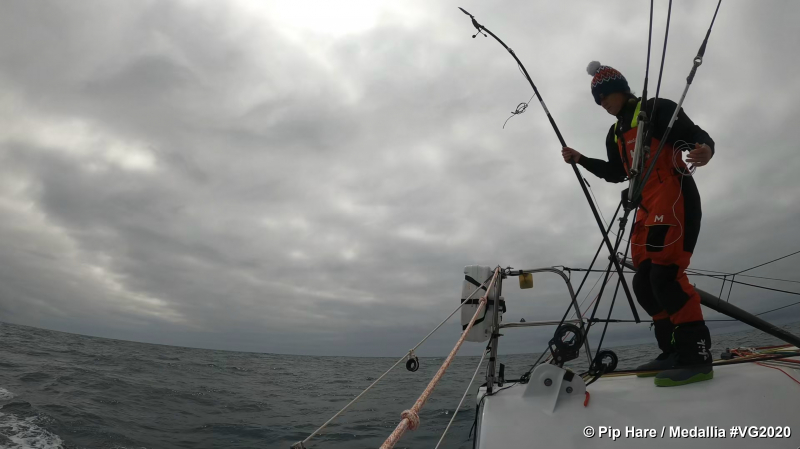 With 1300 miles to sail to Cape Horn this next week will be the toughest of British skipper Pip Hare’s Vendée Globe. With her autopilot system compromised due to the lack of true wind direction and strength data input, Hare is having to constantly adjust her course manually using the pilot’s remote keypad which means she is on high alert all the time, leaving her little time to sleep and eat.

But the 46-year-old from Poole in England remains totally resolute, determined to look after her 20-year-old IMOCA Medallia in order that the evergreen raceboat, which is on its fifth round the world racing circumnavigation, in turn looks after her.

Racing behind a South Pacific low pressure system in 35-45 knots of wind and big, crossed seas, Hare is focused on a pinprick of light at the end of the long tunnel to her first Cape Horn rounding. Forecasts suggest that there will be no let up in the strong winds between now and the remote Cape.

“It is hard for me just now because the course is very downwind, and so I can’t just put the pilot on and have a snooze. If I surf down a big wave or the wind changes direction then there is a crash gybe. And so I have the autopilot control always attached to me, no matter what I do. I am so sensitive to everything. We are going OK. The down side right now is that I don’t sleep. I have done ten minutes here and there, dozes but I am hoping in six hours it will die down a bit, I will gybe and return back up a bit, then get south again on a more stable angle and I will get a snooze. We are doing alright. I just have to keep doing what I am doing,” said Hare today.

Her race – and her colourful and factual communication of it – has won her legions of fans and followers of all ages and all around the globe, increasingly in France.

“The thing is that I have so many friends who are not sailing and people following us who are not into sailing who have no understanding of what I am doing out here, it is good to be able to share the experience,” said Hare today before doing her first Live show in French.

The passage of Cape Horn this morning at 0801hrs UTC was the realisation of a 25 year dream for Armel Tripon on L’Occitaine en Provence. In 13th place he was the first skipper so far on this race to be able to pass so close – a matter of three miles off – that he was able to clearly see the iconic outline of the rock on his misty horizon.

After Romain Attanasio later this evening or early tomorrow, Hare could be next to Cape Horn but has the fast moving Jérémie Beyou on the foiling Charal – who had to restart nine days after the start – around 400 miles behind. Beyou was less than happy with the Pacific conditions, again. In 2016 he was subjected to a big Pacific storm along with Yann Eliès, Jean Le Cam and Jean-Pierre Dick.

“I don't know who invented the name Pacific, because I've never seen it peaceful in three circumnavigations of the world…” grimaced Beyou today from 18th position.

And for the skippers on the climb up the Atlantic, they are savouring their re-entry from the vast, windswept plains of solitary greyness, returning to the technicolour world and sights and smells of land and humanity.

Benjamin Dutreux was thrilled to be overflown by a plane returning to RAF Mount Pleasant in the Falkland Islands. Sixth placed Dutreux had just climbed his mast to get his J2 operational again. Meantime in 10th Maxime Sorel was close enough to the Falklands that he could smell the land.

“It is just great to be here,” he remarked. “That said while I am enjoying the relative peace and quiet of these sailing conditions, I'm scratching my head quite a bit as I have just drawn down the weather files and the routing offers me three different options.”

The ascent of the Atlantic is complicated at least to the latitude of Rio. Increasingly it seems this is an edition of the Vendée Globe which has offered very, very few fast and easy miles.

Maître Coq IV skipper Yannick Bestaven is the only competitor to have broken out of the high pressure system to get into new East-South-East flow of wind which will soon be reinforced by his hooking into a low pressure system.

Bestaven has increased his lead to 245 nautical miles while behind him the going has been slow and very slow. Near the centre of the high Charlie Dalin in second was doing just 2.5kts and was being caught by Damien Seguin who overtook Thomas Ruyant for third place, even if Ruyant and Seguin are 225 miles apart on opposite sides of the anticyclone. But in terms of distance to the next waypoint there are now just 35 miles between second placed Dalin and fourth placed Ruyant.