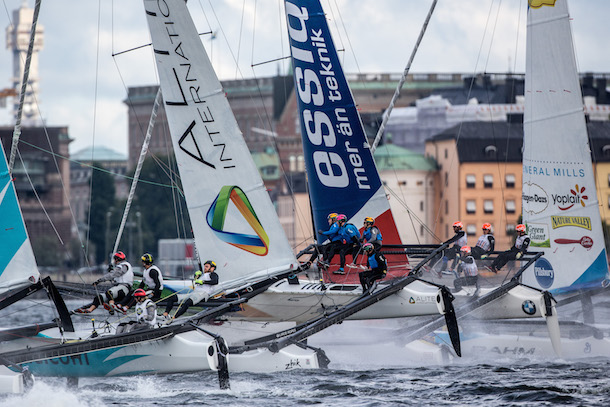 The future of the World Match Racing Tour

The M32 high-performance catamaran will be the featured boat on the World Match Racing Tour (WMRT) next year. The next Tour season will run from February to July and will conclude in Marstrand, Sweden. It will feature as many as six events.

The 2016-’17 season will begin in August 2016 and will be comprised of as many 11 world championship events, all sailed in the M32. The goal is to have 11 WMRT events per season featuring 20 teams per event and a prize purse of US$1 million for the World Championship in Marstrand. Each event will offer a US$200,000 prize purse and winnings will be distributed to every team entered.

Each event will have a Pro-Am day for event and team sponsors. As a result, each event will be held over six days. There will be an extensive media production at each event that will include live TV coverage to broadcast as well as to digital internet channels.

The new racing format will be a mixture of fleet racing and match racing. The first two days will be dedicated to fleet racing from which four teams will be eliminated. The remaining 16 teams advance to a match racing regatta on the third day. There will also be a number of changes to the Racing Rules along similar lines to the current America’s Cup rules, including changes to the penalty system in order to keep the racing close.

The top 20 teams on the leaderboard after the penultimate event of each season will compete for the World Championship in Marstrand, Sweden. The winner of the final event will receive US$1 miilion prize money and will be crowned ISAF Match Racing World Champion.

For the past eight years the World Match Racing Tour has concluded in Malaysia. Beginning with the next, abbreviated season it will conclude in Marstrand, Sweden, in July. The invite process for the short season will award 10 Tour Cards to the top six skippers on the 2015 World Match Racing Tour leaderboard after the 2015 Argo Gold Group Cup. Four other Tour Cards will be awarded by application. The deadline for application is 16 November 2015. The Tour Cards will be awarded on 11 December 2015. All applications should be sent to Tour Director, Craig Mitchell via email: craigmitchell@wmrt.com.

For insurance and safety reasons, all skippers competing on the World Match Racing Tour (including World Championship and Qualifier events) from 2016 onwards will be required to obtain a M32 match racing licence. M32 match racing licenses can be obtained in two locations:  Lanzarote, Puerto Calero (November 16-18, 2015, and November 30-December 2, 2015), and Bermuda (January 5-7, 2016, and February 16-18, 2016). The cost of an M32 match racing licence is US$1,000 per crew member. There will be no fee for a Tour Card from 2016 onwards. Competing crews on the World Match Racing Tour will need to participate in at least two events per year in order to maintain their licence.