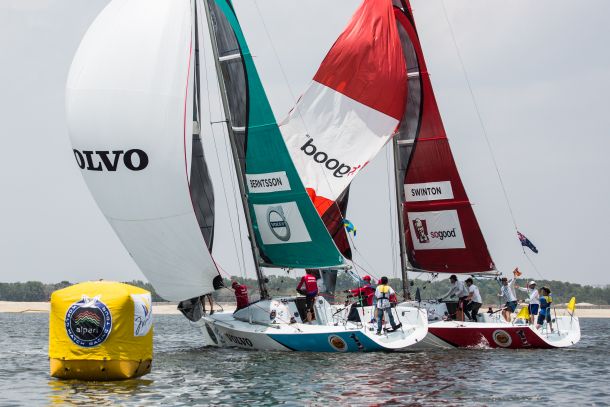 The World Match Racing Tour (WMRT) today announced the addition of the Royal Southern Match Cup (10-14 June) to the 2015/16 championship schedule. Organised by the Royal Southern Yacht Club (RSrnYC) in Hamble UK, the Match Cup will be added to the calendar as a 'World Tour' event following the new and expanded event format for 2015 announced by WMRT last week.  The top six placed skippers from the UK event will be awarded points to the annual championship leader-board.

“The RSrnYC has been very pro-active in developing its youth sailors and their involvement in match racing over the last few years. We were very pleased to offer some technical assistance to the Match Cup at their inaugural ISAF Grade 2 event last year, and to now include them as an official event of the World Match Racing Tour calendar in the UK.”

Karen Henderson-Williams, Vice Commodore of the Royal Southern Yacht Club, who has been involved with the Club's match racing since it started five years ago said:

“This is like a dream come true!  Eight years ago, my colleague and Event Director, Colin Hall, came back from Perth WA having seen top level youth match racing at work in the Warren Jones Invitational and asking, 'How can our young people compete if they don't have this kind of opportunity at home? We started five years ago in our Academy and held the first ISAF Grade 2 (European Championship level) event in the UK for six years. We have two Qualifiers to decide who gains the final invitations to compete in the Match Cup, one in Ploen, Germany, in May and our own on 11/12 April, so to be able to announce the event's participation in the World Match Racing Tour now is right on cue.”

Three of the eight Tour card skippers for 2015/2016, including five-time World Champion Ian Williams (GAC Pindar), will compete with a world class field in the Match Cup for the second year running.