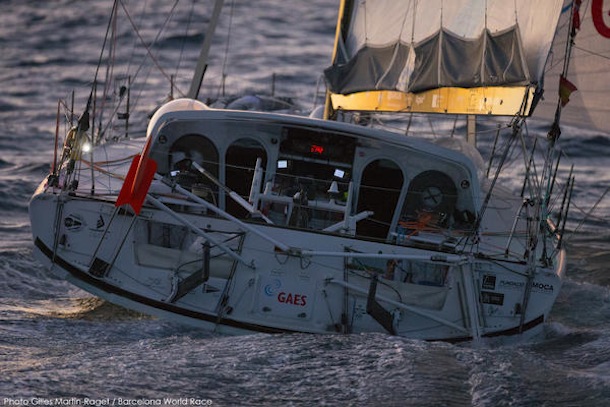 The tricksy Mediterranean could yet play a final April Fool on the Barcelona World Race fleet. Third placed Anna Corbella and Gerard Marín hope to arrive back in the port of Barcelona, from which they have run their GAES Centros Auditivos campaign, tomorrow. However, Anna Corbella cautiously warned that they had spent last night drifting and virtually becalmed – as Neutrogena ghosted over the finish line into second – and they may well have more than 24 hours of light winds sailing ahead of them to cover the remaining 210 miles from their position off the coast of Alicante to the Barceloneta finish line and complete the podium of the Barcelona World Race.

“We are planning to arrive on the first of April, but at the moment we are not very sure of that because last night we spent some hours floating with no wind, and we have a bit more of these conditions to pass this afternoon and tonight,” she reported today.

“We'll see what happens but probably if we don’t arrive on the 1st we’ll arrive on the 2nd in the morning. We hope so. So we need one or two more nights at sea to arrive home, and at the moment we are sailing with only 2 or 3 knots of wind, and the wind is from the north and very, very light.”

Anna Corbella will finish her second Barcelona World Race – having come sixth in 2011, with she and co-skipper Marín expected to arrive in the evening of Wednesday April 1, or early on Thursday April 2. Corbella confirmed: “We could arrive tomorrow evening, but the Meteo files are not so accurate and the calms are turning out much heavier that the forecasts say, so there's the possibility that we will arrive on Thursday in the morning.”

Having recovered from a long, late night which saw them arrive in Barcelona at 0147 local time, to take second place in the Barcelona World Race, Neutrogena’sGuillermo Al tadilltoday took time to reflect on his race and praise his co-skipper Jose Muñoz:

“He’s a good sailor Jose, and he’s very patient. And the proof is he was holding me for these three months! So he had to be really patient! And this patience makes him good at solving problems. So sometimes what would happen is more or less we would be pushing the boat and making problems or breaking things, and he was sorting these things and repairing things. He made an awesome job repairing the sails and so on, without him I don’t think we could have finished the race.”

Altadill also revealed the extent of the damage they sustained to their communications equipment and how the duo adapted by reverting to a more traditional style of sailing. “It was quite tough, we had a problem with the gybe and all the antennas, the satellite antennas, GPS, communications, everything is off. And we sailed three weeks with no weather information, we didn’t know where the other boats were, and we only communicated with the team just with the safety Iridium. So it was a little bit tough, but then you get used to it and we sailed a little bit the old fashioned way.

“Instead of being more in front of the computer you have more time on deck, more time watching the clouds, the wind, and then you make your own idea of the weather.

“When we stopped in New Zealand we didn’t go to check the position of the others because we knew they were very close. When you lose a lot of miles stopping and then you go back to the race, and you see the other ones very close, then you start pushing again and then you can break things. So we decided we don’t have any information and just sailed the boat as best as we can.”

Back in the Atlantic, fourth and fifth-placed One Planet One Ocean and Pharmaton and We Are Water remain perfectly in step with one another, both averaging exactly 10.7 knots of boat speed over the past 24 hours, midway between the latitude of the Canary Islands and Madeira. Just over 100 miles continues to separate them. In sixth, Renault Captur have several days of sailing in moderate but consistent north-easterly trade winds, averaging around 8 knots of boat speed.

Meanwhile the last boat in the Southern Hemisphere, Spirit of Hungary, is preparing for a lengthy Doldrums crossing, Conrad Colman blogging today around 300 miles off the coast of Brazil:

“The Doldrums are an infamous area for sailors, especially those in a hurry like us. This is typically the zone of scorching sun, pitiful wind, fried nerves and parched scuttlebutts.

“Unfortunately our luck with the weather is holding true, meaning that we are lining up for a challenging crossing of a wide band of light to no wind, from five degrees south of the equator to one degree north. In a classic case of the rich getting richer, or at least getting home sooner, the leaders made it through with barely a slow down when they were here a couple of weeks ago.

“So, with my shoulder getting stronger by the day, we’re braced for a long battle with marauding squall clouds, fitful winds, a stupidly powerful sun and endless sail changes.”