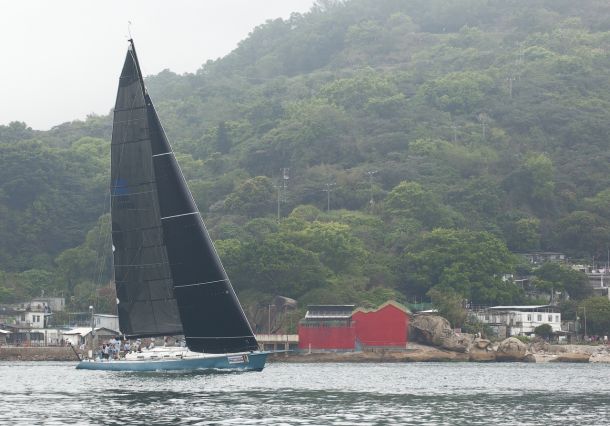 In Hong Kong today, even though the original Philippine destination of San Fernando was ruled off limits because of the activity of super typhoon Maysak, 17 boats from the original entry list of 25 elected to go offshore racing over Easter.

Using the scheduled Victoria Harbour start, a 330nm combination of physical and virtual marks was put together to take the boats south west of Hong Kong, leaving the Lema Islands on starboard, before completing a figure of eight around four waypoints, then returning via Dangan Dao to finish at Shek O Rock.

With an unseasonal southerly in the harbor, flicking between 2 and 8kts, Race Officer Simon Boyde set a start line in the middle of the harbor and, with visibility worsening to the east, set the fleet off on time in 6 to 7kts. OneSails Racing and Antipodes were first out of the blocks, with the TP52 sneaking ahead of a hole which engulfed the rest of the fleet before they had reached Hung Hom.

As breeze filled in, Antipodes was the next boat to pop out, then Explorer under spinnaker and Sea Monkey under a Code Zero. By the time the bulk of the fleet had reached Hung Hom, OneSails Racing was reaching though Lei Yue Mun Gap

Inside the harbor, spectators were treated to some close racing between IRC Premier boats Xena and Explorer, while Mills 41 Ambush showed off her new lines as she made up ground on Antipodes.

At 1600hrs, OneSails Racing was leading on the water, albeit at a speed of around 5 to 6kts with an ETA of midnight on Friday night, while in IRC Premier, Moonblue 2 had already signed off and declared that she was going fishing.