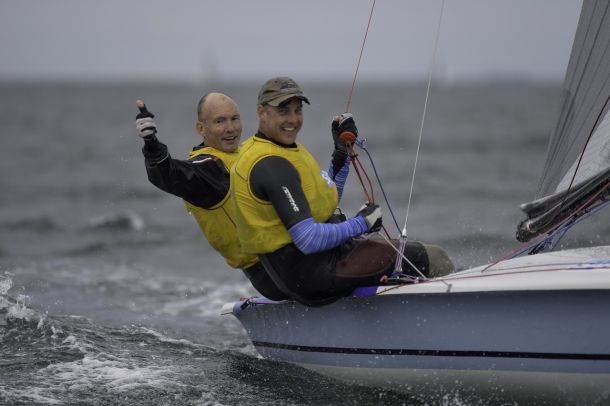 Mike Holt and Carl Smit have won the SAP 505 World Championships with a day to spare, after another dominant day on Algoa Bay in Port Elizabeth, South Africa.

The breeze built throughout the day and gave the fleet some spectacular sailing in winds of predominantly 12-18 knots. The first race didn’t start well for Holt, who was focused on covering his main rival, the Anglo-German team of Ian Pinnell and Johannes Tellen. But somehow the Californian crew picked their way up a difficult windward leg to round the first mark just in the lead.

The reigning World Champion had a battle keeping another Californian team at bay, the lightweight but smooth-operating Ted Conrads and Brian Haines, who briefly stole the lead from Holt/Smit. But by the end of the three laps, Holt and Smit were too strong and crossed the line in first place, ahead of Conrads/Haines, with Pinnell/Tellen in 3rd.

From here on, Holt was in a very strong position. Pinnell would need to win the remaining two races in the series if he was to stand any chance of toppling the 2014 World Champion. The second race saw the first restart of the championships due to a collision with the pathfinder and South Africans Grant Ballantyne and Evert Groenewald breaking their mast on the start line and having to retire. Not a good day at the office for the 77 year old skipper, who is entering his 50th year as a 505 sailor.

Once the second race got underway, it didn’t take long for a similar pattern to establish itself, with the two leading Californian crews taking up their positions at the front of the fleet. Pinnell was back in 7th, and managed to climb to 5th by the finish, but Conrads/ Haines were again 2nd, with the untouchable Holt/Smit high-fiving their way across the finish line in 1st place. Holt had secured his second world title, with his long-term crew Smit claiming his first 505 world crown.

“It was amazing to win with Rob Woelfel last year in Kiel,” said Holt, “but it’s really special to win with Carl this year. I’ve sailed with him a long time, and it’s great to win with him today. Five wins out of seven isn’t bad, a bit easier than last year. We’ve had our ‘two beers a night’ rule this week, but not tonight!”

Holt and Smit enjoy the luxury of not having to race tomorrow’s final race, but will watch the weather before they decide. The strong-wind sailing has been some of the best of Holt’s long 505 career, and the urge to go sailing on spectacular Algoa Bay might be too strong to ignore.

Meanwhile, two 2nd places put Conrad and Haines within striking distance of Pinnell and Tellen for 2nd overall tomorrow, with two Australian crews not too far behind. The big prize has been secured, although the battle goes on to determine the other podium places in South Africa.

For video highlights of day 5: