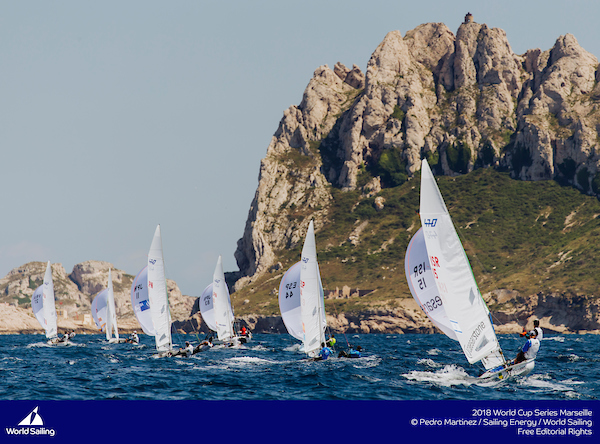 Marseille was picture perfect for the fourth day of racing at Sailing's World Cup Series Final as the opening series for the RS:X Windsurfers and Nacra 17 multihull concluded.

Italy's Ruggero Tita and Caterina Banti sailed a day they will never forget in the Nacra 17 and Pierre Le Coq asserted himself in the Men's RS:X ahead of Saturday's Medal Races that will be streamed live on World Sailing's YouTube Channel.

Thursday's grey skies and lack of wind was replaced with clear blue skies and a consistent 8-13 knot south westerly breeze that whetted the appetite of the 212 sailors from 34 nation hungry for breeze.

Tita and Banti were outstanding in the Nacra 17, winning all four of the Nacra 17 races on Marseille Bay.

They led from the start in two of their races and only had to overcome a couple of boats in the remaining races as they gave a masterclass in sailing the foiling Nacra 17.

“Training, training and training,” expressed Banti when asked about their secret to sailing the Nacra 17 successfully, “Also, having fun because we are improving our performance every day, we are having fun.

“We learn something new every day, but we have a lot of work to do.”

The Italians share an excellent relationship and are passionate racers, “We trust each other and I will never sail a Nacra without Ruggero,” commented Banti.

“We are good upwind and downwind and our starts are improving. We were incredibly good today.

“This is our best point of the competition so far, we won all four races and we've never done that at a World Cup Series before. We are 13 points in the lead and we are feeling confident for tomorrow.”

John Gimson and Anna Burnet (GBR) did their best to keep the Italians in their sight and go into the Medal Race 13-points behind. Vittorio Bissaro and Maelle Frascari (ITA) are two points off the Brits in the final podium position.

Pierre Le Coq (FRA) put the hammer down in the Men's RS:X, taking two race wins and a second to open up an 11-point lead heading into the Medal Race.

Le Coq thrived in the conditions and has moved clear of his national rivals Thomas Goyard and Louis Giard.

“I like this venue with the technical conditions. It's quite choppy and shifty and that's what makes it a technical area to sail in but that is why I enjoy it.”

Ahead of the Medal Race, Le Coq is guaranteed a medal as he is 24 points clear of Pawel Tarnowski (POL). Goyard currently occupies second place on 28 points with Giard following on 33 and Tarnowski on 41.

Le Coq will guarantee himself gold if he keeps his rival Frenchmen at bay but anything can happen in the Medal Race.

Lilian de Geus (NED) could not quite find her form to match the winners from three Women's RS:X races but she was able to maintain her overall lead.

“It was a hard day for me, I had decent speed, but my tactics could be better,” explained the Dutch Olympian, “I finished ninth in my first race, then third and then ninth in my last race.

“I didn't have good starts, a few girls went planing to the left, I also did the same but I was just a little too late. I had bad races but I managed to catch up.”

De Geus leads Israel's Katy Spychakov, who posted two seconds and a race win, by just two points. “I am happy that I am first and still leading. I am feeling pretty confident but we're so close on points that anything can happen,” continued de Geus.

“I really want to win this and I'll be sure to not make the same mistakes tomorrow.”

The Men's and Women's 470, Laser, Laser Radial and Finn fleets continued their opening series, sailing an additional race to catch up on races lost the day prior.

Mat Belcher and Will Ryan (AUS) advanced to the top in the Men's 470 after two wins and a 10th, which they discard. Germany's Malte Winkel and Matti Cipra are nine points off the Australians in second. The day's other race win went to Giacomo Ferrari and Giulio Calabro (ITA) who are 10th.

In the Women's 470, Hannah Mills and Eilidh McIntyre (GBR), defending World Cup Series Champions, continue to fight with Spain's Silvia Mas and Patricia Cantero. The Brits managed to extend their lead to four points, after beating the Spaniards in two of three races. Ai Kondo and Miho Yoshioka (JPN) remain in contention in third.

Two-time World Champion Nick Thompson (GBR) holds the lead in the 25-boat Laser fleet following 3-3-7 scoreline. Thompson tops the leaderboard on 22 points and is followed by Hermann Tomasgaard (NOR) on 26 and Philipp Buhl (GER) on 28.

Elliot Hanson (GBR) took two race wins and moves up to fourth, a point of Buhl.

Emma Plasschaert (BEL) and Maria Erdi (HUN) continued their fight at the front of the Laser Radial however it was the Belgian that took the initiative, turning a one point lead overnight into a ten point advantage.

Plasschaert discarded her 11th in the first race of the day and bounced back with a second and a first. Meanwhile Erdi counts two big scores, a tenth and an 11th but won the final race to maintain second overall and to stay within reach of Plasschaert.

The momentum is swinging to and fro in the Finn fleet and after three more tough races Jorge Zarif (BRA) and Andy Maloney (NZL) are tied on 21-points. Turkey's Alican Kaynar trails the pair by three points in third after an outstanding day that saw him take two wins and a second.

Medal Races are scheduled to commence at 12:00 local time on Saturday 9 June with World Cup Series Champions to be crowned in the Nacra 17 and RS:X Windsurfers. The remaining fleets will conclude their opening series ahead of Sunday's Medal Races.