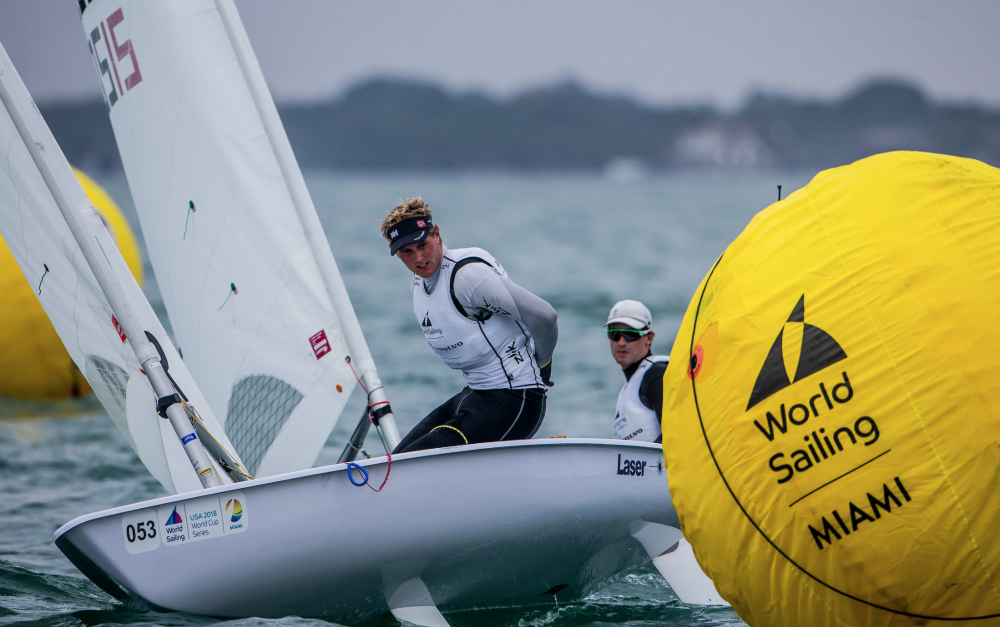 The world’s leading Olympic sailors, including 34 Olympic medallists, are preparing for the second round of the Hempel World Cup Series in Miami, Florida, USA.

More than 650 sailors from 60 nations are gearing up to race on the waters of Biscayne Bay for the first big event of 2019. Racing is scheduled to commence on Tuesday 29 January and run through two days of Medal Races on Saturday 2 and Sunday 3 February.

The 2020 Olympic venue in Enoshima, Japan was the last big opportunity for the world’s top sailors to test themselves as the battle to Tokyo heats up. After a few months of rest, training and intense preparations, excitement for another busy year of Olympic class sailing is high, starting with the Hempel World Cup Series event in Miami.

Luke Patience and Chris Grube (GBR) dominated the Men’s 470 fleet last year in Miami and make a return to the waters in a bid to defend their title.

Home nation hopes will be pinned on Stu McNay and Dave Hughes (USA). McNay sailed with former crew Graham Biehl one year ago, finishing seventh, but is back in the boat with his regular partner.

McNay and Hughes have tasted success on the Miami waters in the past having won gold in both 2016 and 2017. They will be joined by four additional American crews who are all aiming to put the pressure on them in the chase for a spot in Tokyo.

In the Women’s 470, 31 crews will fight for supremacy on Biscayne Bay.

Slovenia’s Tina Mrak and Veronika Macarol controlled the pack in 2018 and are back in Miami in a bid to make it two golds in a row. They will face stiff competition from a strong fleet of competitors, including Japan’s Ai Kondo Yoshida and Miho Yoshioka.

The Japanese duo won gold at the Hempel Sailing World Championships in Aarhus, Denmark and finish third on the podium in Miami one year ago. After finishing second at the first 2019 Hempel World Cup Series event in Enoshima, Japan, they’ll be aiming for a similar high-level performance this time.

Afrodite Zegers and Anneloes van Veen (NED) picked up gold in Enoshima ahead of the Japanese and narrowly missed out on a medal in Miami last year. Zegers has a new partner for 2019 – London 2012 bronze medallist and multiple world champion, Lobke Berkhout (NED), so they will be ones to watch out for during the early days of their partnership.

The 27-boat Finn fleet will be spearheaded by American favourite and Rio 2016 Olympic bronze medallist Caleb Paine, who snapped up Silver in 2018 as the accomplished Giles Scott (GBR) claimed a well-deserved title.

Paine finished a disappointing 12th at the Hempel Sailing World Championships, missing out on qualifying USA to the Tokyo 2020 Olympic Games. He’ll have another shot at qualifying the nation at the Finn Gold Cup later this year but will be aiming to start off 2019 with another medal.

Scott won’t be in Miami to defend his title, but there is an abundance of top sailing talent who will contend for the podium. Jorge Zarif (BRA) has moved back into the Finn following his success at the Star Sailors League Final in the Bahamas and has a great pedigree racing in Miami. He has two gold medals to his name – in 2016 and 2017 – and will be targeting a third.

The leading lights in the Laser Radial will all be in Miami, making for one of the most competitive fights since the Hempel Sailing World Championships.

The trio has raced competitively against each other throughout the Tokyo 2020 quadrennial and, as the clock ticks down to the Olympic Games, they will be looking for opportunities to demonstrate their abilities to perform on the biggest stage.

Although Plasschaert, Bouwmeester and Young have enjoyed the recent accolades, there are also plenty of stars who have what it takes to reach the top step of the podium.

Anne-Marie Rindom (DEN), Sweden’s Josefin Olsson and Greece’s Vasileia Karachaliou have been consistent performers over the last two years and will be aiming for a medal. Dolores Moreira Fraschini (URU), Sarah Douglas (CAN), Tuula Tenkanen (FIN), Maria Erdi (HUN) and Paige Railey (USA) will also be targeting a top finish.

The Laser will be the largest fleet in Miami with 105 entrants on the start line. Rio 2016 Olympic gold medallist Tom Burton (AUS) dominated the pack in 2018, winning with a day to spare. As of late, he has been locked in an intensive battle with compatriot Matt Wearn as the two fight for the single Tokyo 2020 spot for Australia. The battle will resume in Miami and is expected to be fiercer than ever.

The Laser pack does not feature Rolex World Sailor of the Year and 2017 and 2018 World Champion Pavlos Kontides (CYP) but there are numerous competitors all capable of claiming a medal.

After finishing a lowly 35th last year, Jean Baptiste Bernaz (FRA) will have his 2017 victory in mind as he aims to regain his form this time round. Nick Thompson (GBR) will be another contender; the Brit has secured five medals in Miami, two of those gold, and will be at the front of the pack once again.

Racing is scheduled to commence on Tuesday 29 January and run through to Sunday 3 February.