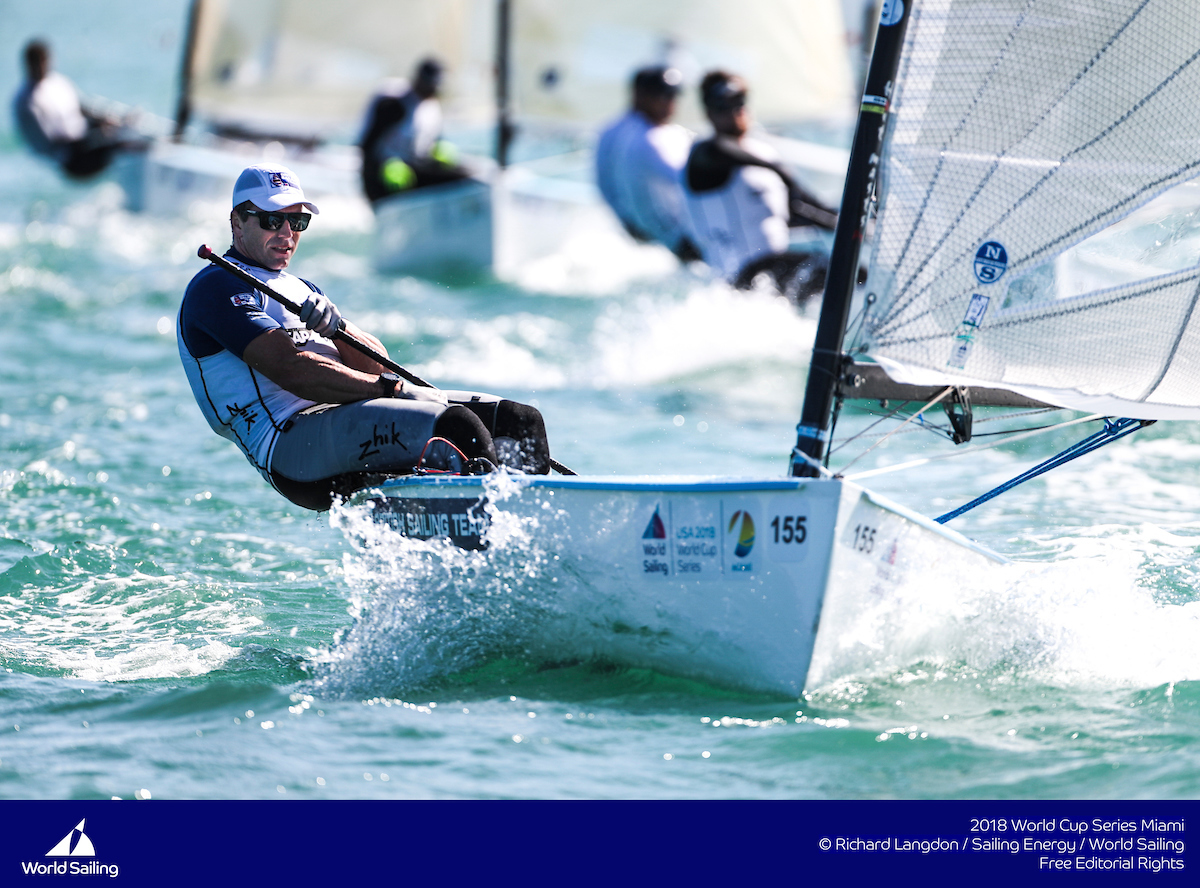 Ioannis Mitakis, from Greece, is the early leader of the World Cup Series in Miami as racing finally got underway following a lack of wind for the fleet on the opening day on Tuesday.

Alican Kaynar, from Turkey, is in second with Brit, Ed Wright, in third. Each of them took a race win on a shifty day’s sailing.

Wednesday brought classic Miami shifty conditions, with the breeze between 5 and 10 knots. The fleet was sailing close to Key Biscayne Bridge, which introduced some current and small choppy waves, and a lot of pressure differences down the course.

Kaynar dominated the first race leading from the first mark throughout from Olympic Champion, Giles Scott, and Wright. The next race was led most of the way by Anders Pederson, from Norway, with Wright just getting the advantage at the end to take the win, while Mitakis recovered well from a poor first leg to take third.

Mitakis then led all the way in Race 3 to take the win and the overall lead. Johannes Pettersson, from Sweden, sailed an outstanding race to cross second, with Scott just behind him in third.

In Miami the fleet is testing a lower limit for free pumping at 8 knots (normally 10 knots) and today’s conditions will probably be the only chance they will get all to test, with stronger wind now forecast. Opinion was divided last year, and it still seems to be divided as the class heads to a decision at its AGM in six weeks’ time.

Pedersen was not convinced about the potential rule change, and sits in fifth overall. However he was happy with his day after spending three weeks in bed with flu and unable to train properly for the event.

“We had a couple of training camps in Garda last autumn and we did one training camp here in Miami in November and December.” With the flu, “I have not had the best tune-up for this week, but I am very happy to start the season and get racing again.”

“Today it was important to be sure if you were sailing on a lifter or a header, and make sure you were in the pressure. It was close and good racing. It was really shifty so key point I think was patience and a bit of luck as always.”

Mitakis has been part of a group training in Athens over the winter, and it seems to have paid dividends today in Miami. “We had some really good training in Greece. We had a really good time there.”

The group included several sailors in Miami including Croatian, Josip Olujic, who is in 12th position, Canadian Tom Ramshaw, in 15th, and Kaynar.

Kaynar said it was very good preparation in Athens with “good partners who have also started the regatta well. That shows that we are on good direction. I am happy about that.”

Describing the racing, he said, “The first race was the windier one with free pumping where the wind was around 8 to 10 knot. The new rule which allows us to pump in 8 knots felt good.”

“I think today it was very important to have good start and stay in the pressure on the upwind. As the top mark was close, the starts had extra value.”

“The forecasts for the next days show stronger winds so I am looking forward to that.”

Racing for the Finns in Miami continues until Sunday.