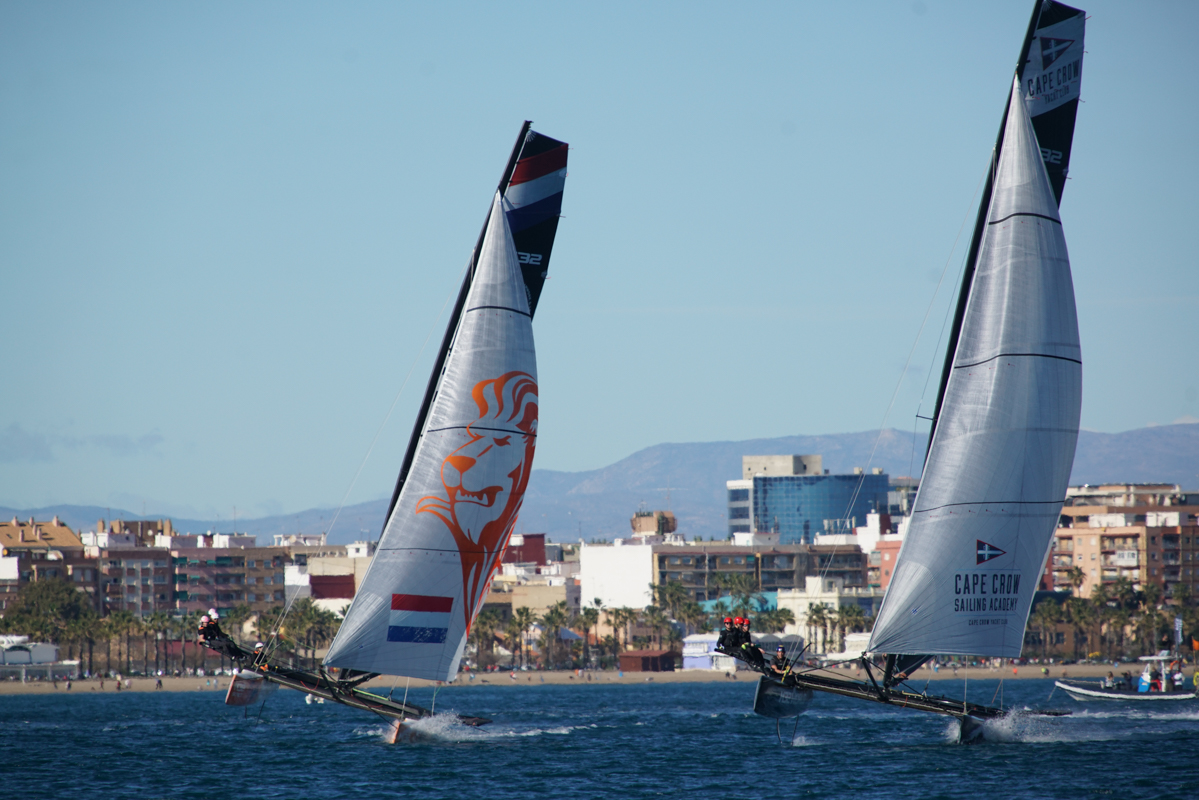 Last week the M32 fleet racing in Europe started, with the race committee firing off 20 races over the three-day regatta, the inaugural event of the M32 Valencia Winter Series taking place on the famous waters which hosted the 32nd and 33rd America’s Cups.

Run by the M32 Class Association, the event pulled together a wide breadth of M32 sailing levels. Skippers included M32 World owner Hakan Svensson, Match Racing world champion Torvar Mirsky from Australia and first-timer Dirk-Jan Korpershoek – all sailing on the same course and all showing they had the ability to win.

West Australian Mirsky, whose normal position is tactician for Richard Davies’ Section 16, stepped in as last-minute skipper for the Swiss entry and looked to be dominant by winning four races and taking the top spot on the first day.

Hakan Svensson with his all-Swedish Cape Crow Vikings came back strong on day two and won the day with just 15 points now separating the fleet after 13 races completed.

“This is a fantastic venue, on par with our Miami winter sailing over in North America,” Hakan remarked.

“Intense racing in perfect conditions, great hospitality and wonderful volunteer work,” he said. “All in all, this is how an event should work. To sail in and out from the dock I believe made everyone feel the accessibility to the great racing this venue can provide.”

While some non-scoring racing inside the city basin to really test crew work was won by the newcomers to M32 Series, Dirk-Jan Korpershoek and his Team DMTRA, it was his Dutch compatriot Pieter-Jan Postma, doubling up as skipper and event organiser for this year’s Valencia Winter Series, who topped the final day’s scoring races to secure himself bronze medal position overall.

“I’m very happy to win the first European M32 event of the year with Section 16. The competition was tight and the conditions were shifty which made for very tricky tactics and many position changes,” Mirsky said.

“We were a new combination of sailors on board and Richard Davies had to attend to some business at the last minute, so I took the helm. We were lucky enough to find Spanish Finn sailor, Victor Gorostegui, who was training in Valencia at the time to step in.”

Competition was fierce, each team taking a win at some point over the three-days and 20 races. On land, Veles e Vents, which sits just inside the popular beach strip of Valencia, provided a grand epicentre as it hosted the M32 fleet over the weekend and idyllic city centre berthing for the boats.

“Veles e Vents had a really relaxed feel to welcome everyone off the water,” Van Postma said.

The location delivered teams with very attractive racing conditions of 20-22 degrees air temperature on flat water in a 6-15knot breeze – plenty to get the M32 catamaran flying on one hull.

“The race committee and organisers did a great job; everyone enjoyed the warmer Valencia weather with flat water, offshore wind, and close to shore racing,” Mirsky continued.

“Section 16 will be back for the next winter series event with Richard on the helm and looking to hold on to the lead. It’s a great winter setup and I’m sure we will see more teams join for the following events.”

The next two events in the series will run from February 16-18 and March 16-18, when organisers hope to double entry numbers. There will also be back-to-back World Match Racing Tour qualifiers held as part of the M32 World base in Valencia which will run 20-22nd and 23-25th February.