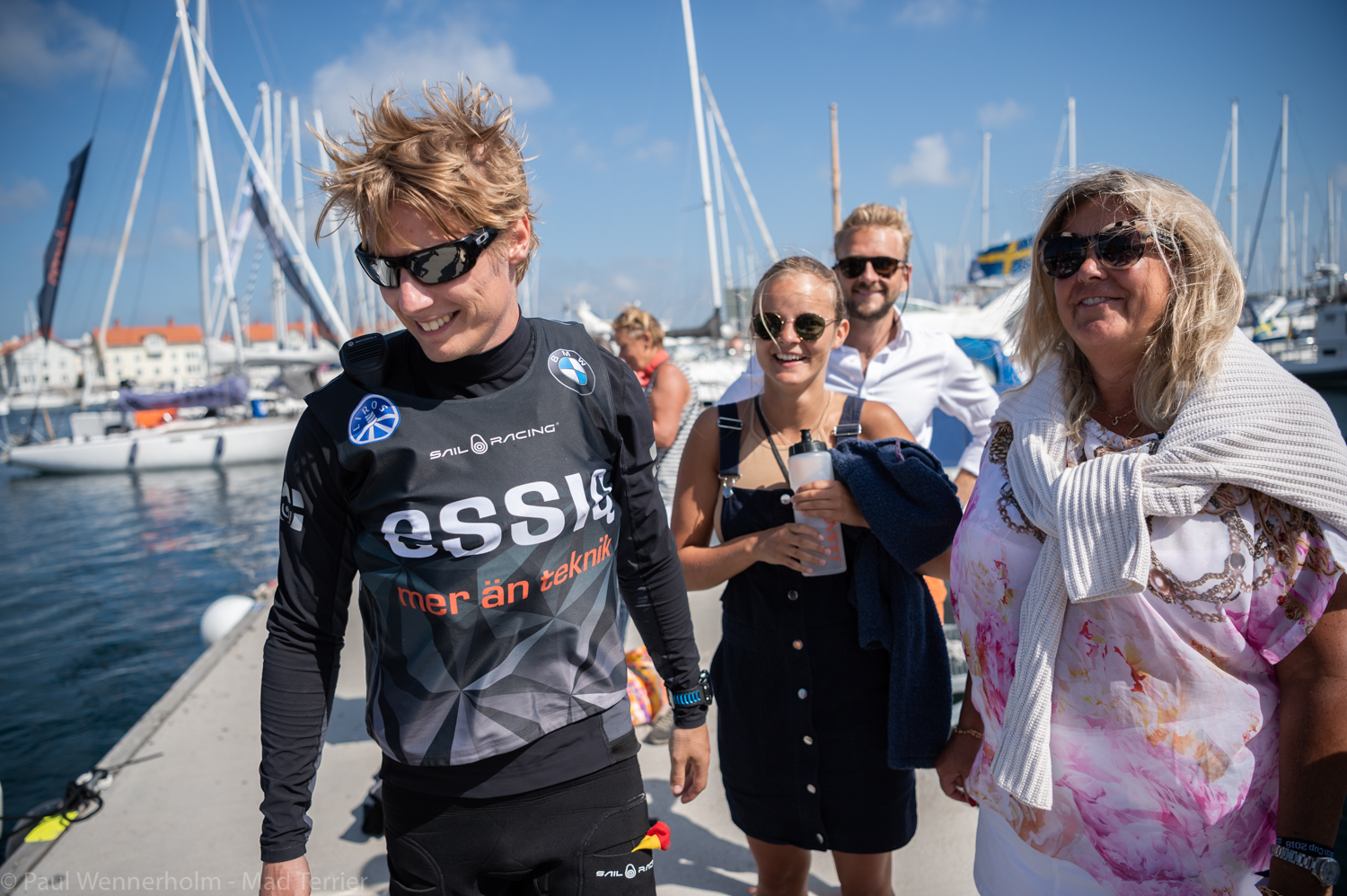 Marstrand, Sweden: A building breeze on Marstrand, the rocks lined with race goers, and a program of racing to whet the appetite of any sailing fan all added to what was a spectacular Quarter Final Stage worthy of a Finals performance.

All the expectation and hard-talk appeared to be in vein, as Ian Williams took a decisive victory in the first two matches against Taylor Canfield, moving the pair to match point and a possible clean sweep by the British six-time world champion.

After a short lunch pause to re-group, the US One team clearly had a strong re-think, as they came out with a refreshed playbook, nailing the start just bow ahead of WIlliams in the third.

Exchanging the lead as they passed on the upwind multiple times, Williams had starboard advantage coming into the top gate. Canfield put in a last minute down-speed tack, which allowed Williams back into it.

The two gybed boundary to boundary at speed, with Canfield eventually making it in one less gybe which gave him a comfortable lead and he was able to carry to the finish.

“Obviously getting off the line ahead in a short race track with a lot of manoeuvres is key. We just need to get off the line well and do our jobs well. We've just got to win the next two, we’ve done it before and we will do it again,” Taylor Canfield said from the water before heading into race four.

And sure enough, the American won, squaring the series at 2-2 to setup a sudden death match.

Unfortunately for Canfield, Williams was able to nail the final race and the 2011 Match Cup Sweden winner will lives another day to fight for the 2018 title.

“Psychologically I think it’s quite hard when the other team gets to regroup,” Williams said, referencing the midday intermission in racing. “Of course Taylor and his team came out really, really strong for the afternoon session and they pushed us all the way.”

Yann Guichard had the choice of the fleet and decided to take on local hero Johnie Berntsson in his Quarter Final pairing. Despite facing the force of an island cheering against them, Spindrift Racing took three straight victories over the Swede and continued a winning streak in which the French team has looked in a league of their own at times.

The other Swede in this competition, local Gothenburg skipper Nicklas Dackhammar, is now flying the flag solo after he beat Sam Gilmour in three straight matches, a score line which didn’t truly reflect the racing. Dackhammar said: “They really gave us tough matches. We had three straight wins but in the second and the third, it could’ve gone either way.”

In an all-Australian battle, reigning Match Racing world champion, Torvar Mirsky, was racing Sydney’s young match racing sensation, Harry Price. Price, in his first season as a Tour Card holder, was the underdog on paper but didn’t let the pressure get to him.

Before the racing he stated, “Torvar might be the world champion, but this isn’t the Worlds. It’s another regatta and it’s anyone’s game.”

Price’s team on Down Under Racing lived up to their promise, cruising to victory in the opening match, surprising many watching from shore. They went on to lead the next race until over-cooking the layline on the first upwind, allowing Mirsky just to leeward to sail past. Around the weather mark they pounced and rolled back into the lead.

On a run which totalled five gybes as Mirsky fought to keep hold, both finally headed for the right turn mark, with Mirsky gaining an overlap at the zone to round inside and lead up the final beat. Price tried to pull Mirsky into a tacking duel, but the World Champ didn’t bite, taking the right side and holding the lead until the end.

Mirsky came back to take the fourth, sending the pair to a sudden death battle. In the final race, Price misjudged his final run back to the line and was just over at the gun and was forced to pull back, allowing Mirsky an easy ride to the lead.

Although the pair was at close quarters, Mirsky held a lead though the first lap. On the final upwind Price hit the top right corner, where the breeze lifted him to the layline and caught out Mirsky on starboard tack.

Already down speed from the previous tack, Mirsky was forced to tack again with his gennaker out. The low speed move gave Price all the opportunity he needed to grasp the race and lead home to the finish.

In an interview just moments after crossing the finish line Price was speechless. “Tell you what – going up against Torvar, the reigning world champion – it’s just…I’m speechless.”

“The boys put in a great effort, a lot of comebacks from behind. But it ain’t over till it’s over.”

The action from today has setup another stellar line-up of racing tomorrow as Guichard and Dackhammar, both winning their Quarter Final 3-0, make up one side of the draw with Williams and Price having gone the distance today will complete the Semi Final Stage line-up.

The Women’s Class resumes tomorrow following a break today. New Zealand’s Olivia Mackay made a surprise pick of opponent in Anna Oestling, the most experienced M32 racer in the fleet.

That left Clare Costanzo (AUS) to battle Renee Groeneveld. Costanzo has the youngest team at the competition, but flying as the highest ranked female team on the World Sailing Open Match Race Rankings, while Groeneveld has experience as an Olympic match racer and former Nacra sailor.

Semi Final Stages in both classes will run side-by-side tomorrow starting at 10:00 here in Marstrand where more of the same is hoped for.