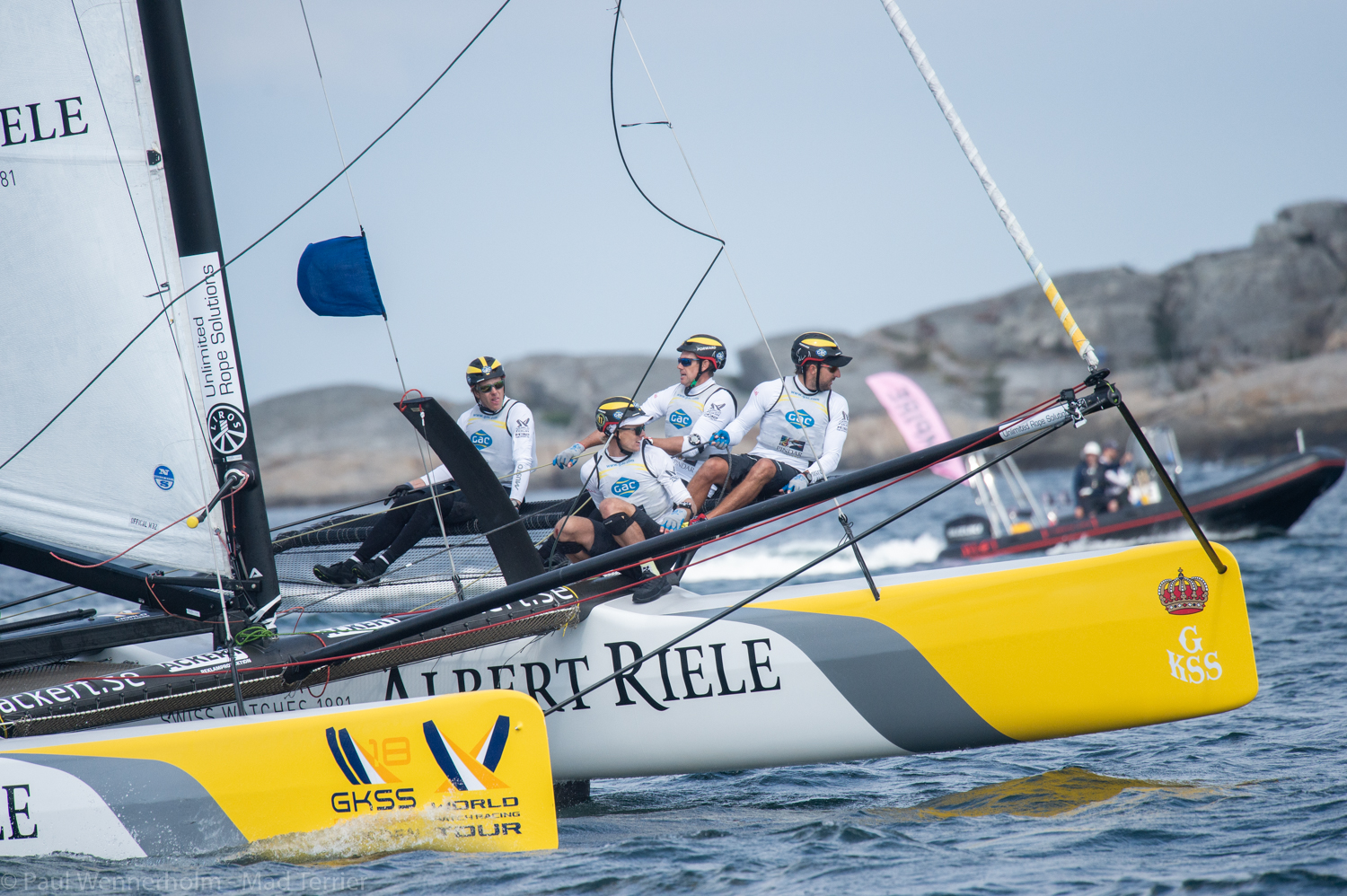 Experience paid dividend on a day which delivered turbulent conditions to challenge both the sailors and the race committee at the Match Cup in Mastrand, Sweden.

A shifting northerly came straight over the island of Marstrand to give a race course laid ideally for the huge crowd spectating onshore, the top gate just in front of the grandstand. Brutal 3-0 wins across the board haunted teams on the receiving end today.

Yann Guichard continued the high level of sailing which he has held since the first round of the regatta, winning 3-0 to knock out the only remaining local team, Nicklas Dackhammar’s Essiq Racing.

As well as being one of the World’s greatest multihull sailors, Yann has firmly cemented himself as one of the top match racers in the modern era of multihull one-on-one competition.

In the opening match, the pair delivered drama right from the word go, with a Black Flag in the pre-start seeing Dackhammar disqualified from the race. The two boats were flying toward each other, both on port with Dackhammar the keep clear boat.

The Swede made a last minute gybe but gave Guichard no space to keep clear, ramming the boats together and hooking racks. The pair pirouetted through 180 degrees before Guichard got clear and sailed away leaving Dackhammar in irons dangerously close to the rocks.

Dackhammar unfurled the gennaker in an attempt to quickly get his bow down, but that just caused to him to slide backwards towards the rocks. The safety team stepped in to pull Dackhammar off the island’s rocks, forcing the umpires to give a black flag for outside interference.

In the other matches it was never a done deal until the final horn when crossing the line as both teams were pushing to the limits, but on each occasion the French team were just the faster boat.

After racing, Guichard commented: “Really happy to have won all matches, especially as Nicklas has pushed us very far and they were all tight races.”

Looking ahead to tomorrow’s final against six-time World Champion Ian Williams, he continued. “We are happy to meet Ian tomorrow, especially as he has proven to be sailing really well since the beginning of this competition. We will have to be strong in the start procedures.”

In the other Semi Final Stage match in the open competition, Ian Williams also took a 3-0 win over the young Australian skipper, Harry Price.

Price had looked on top form through the Repechage and Quarter Final Stages, but again fell victim to Ian Williams with the Brit sending home Down Under Racing at the 2017 GKSS Match Cup Sweden.

“Obviously GAC Pindar are really pleased with a 3-0 win,” Williams said. “We felt strong in the starts, winning two of the three. In the other it felt good to overtake a team who are especially good on boat speed. The result puts the team in good stead for tomorrow’s final and we are looking forward to it.”

In the Women’s fleet, the morning’s racing saw a battle of youth versus experience as the youngest team at the regatta, Australian Clare Costanzo’s Fusion Racing, were up against former Olympic match racer from London 2012, Renee Groeneveld from the Netherlands. On this occasion, experience again was the victor as the match went to 3-0.

Mackay, with the pick of opponent for the Semi Final Stage, surprised fans by choosing to face the very experienced match racer and M32 sailor Ostling. All matches featured close pre-start action but in the end Ostling came through to win each race and take the tie 3-0.

“We said that we wanted to push them from the entry and we did so came away great in all three starts,” Ostling said.

“In the last race they were close behind and we were late with protecting the right so they passed on the first downwind but we took the gate we wanted and one gybe less gave us a strong position early on the upwind.

“Great tacks and speed gave us some distance and we protected the right and from that we were able to keep our lead. It feels great and so looking forward to the final tomorrow.”

With all matches going 3-0 at the Semi Final Stage, the draw appears to have saved the best until last and set up for a great battle at the final day of GKSS Match Cup Sweden.