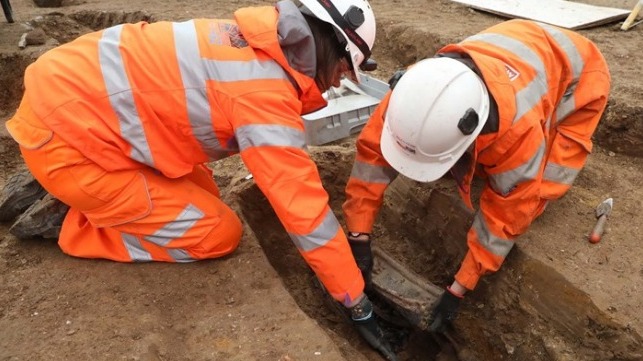 Workers building the new London-Birmingham high-speed railway line have unearthed the grave of the Royal Navy sailor who gave Australia its name.

For 180 years the last resting place of explorer and navigator Captain Matthew Flinders has been lost among 40,000 other bodies in graves near Euston station. But archaeologists excavating St James’ burial ground to pave the way for the new HS2 terminus have identified the officer’s grave out of the thousands at the site. The lead depositum plate – breast plate – put on top of Flinders’ coffin when he was buried in July 1814 meant his remains could be formally identified.

As commanding officer of HMS Investigator, Flinders sailed from Portsmouth in 1801 to conduct the first circumnavigation of Australia – confirming it was a continent. Although he wasn’t the first man to use the term, his account of the voyage – “A Voyage to Terra Australis” – gave the new land its popular name.

His grave disappeared in the 1840s when the original Euston station was expanded into part of the cemetery. The headstone was removed and it was feared Flinders’ remains were lost; for a long time a myth persisted that he was buried under Platform 15.

Historians will now study his skeleton to discover whether life at sea left its mark – and anything else it may reveal about life in the late 18th and early 19th Centuries – before Capt Flinders is re-interred with the rest of the dead from St James’ at a location to be determined.

“Matthew Flinders is one of those iconic characters from the golden age of the Royal Navy. He’s a household name in Australia but far less so here in his native land. He’s very much a forgotten hero of discovery,” said Matthew Sheldon, Head of the Curatorial Department at the National Museum of the Royal Navy in Portsmouth. “Hopefully, thanks to his grave being rediscovered after nearly two centuries of being lost, people will also rediscover Matthew Flinders the explorer and he can take his place alongside many legendary Royal Navy explorers such as Cook, Franklin and Scott. We’re glad his journey is now over.”

Other remains among the 40,000 at St James’ which have yet to be found by the HS2 team include Bill ‘the Black Terror’ Richmond – a slave born in New York who became a celebrated bare-knuckle boxer and taught Lord Byron to spar; political and religious activist Lord George Gordon, famous for his part in the anti-Catholic ‘Gordon Riots’ of 1780; and former RN James Christie – who founded the namesake world-famous auction house in 1766.