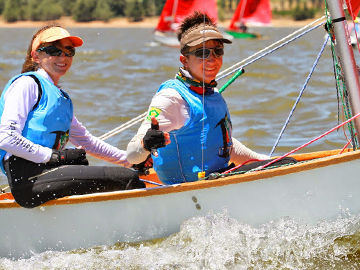 15/01/2015
Consistency paid off for Michaela and Ryan Robinson at the Mirror World Championship in Villiersdorp, South Africa as they took the title on their home waters.
The South Africans shattered the perception that you need a 'plastic' Mirror to win at the highest level with their immaculately prepared 8-year-old wooden boat. Michaela crewed for Ryan when they won the Worlds at Lough Derg in Ireland in 2013 and continuing the Robinson family sibling mentoring policy this time the tables were turned and Ryan helped Michaela to win.

Team GBR were looking strong mid way through the regatta with Eleanor Keers & Izzy Pugh level on points with the Robinsons and her elder sister Gemma & Imogen Bellfield sitting in third.

The Australians, South Africans and the French boat were hot on their heels – with the GBR boats excelling in the strong winds – the Aussies and South Africans were particularly astute in the lighter winds, finding the right way to go during the periods of wind transition before the daily SE'er set in each afternoon.

With the Race Officer having done a great job in packing in 11 races in 4 days, he only had to fit in 1 race on the final day which started in a good 8 kt breeze but inevitably it switched off on the final beat with the Australians at the forefront – giving Simon Barwood and his 8-year-old son Tyson the points to edge into a well deserved second place. Brothers Eben & Johan Vivier 420 sailors from South Africa finished fifth and Sacha Pelisson, a French 470 helm, & Alec Webb in their new P&B Racing South African Mk 3 hull finished sixth.