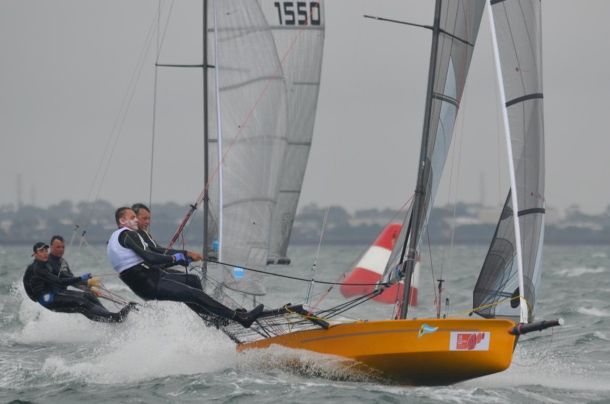 After a gear and crew damaging Race 5 yesterday, today’s lay day is a welcome reprieve for the sailors competing in the 2015 International 14 World Championships in Geelong. It is also opportune as the strong wind warning threatens a 25-plus south-wester to come in from late morning.

In the boat yard there is plenty of activity as various repair jobs are being completed.  British skipper Katie Nurton is on the tools fixing the rudder stock while her crew, Nigel Ash, rests his right knee which he hurt prior the championships and has been nursing ever since.

The British team of Ben McGrane and James Hughes, who are still in second place overall after a DNF yesterday, are carrying out a major repair job. They originally planned to start it last night, but as McGrane admitted, the beer and rum was a far more attractive option after a hard day at the office. They are now spending today replacing their broken mast with their spare. “We will be ready to race tomorrow,” a confident Hughes announced.

On the Australian boat, Del Boca Vista, skipper Brad Devine is repairing a broken tiller extension. “It happened on the last run with the spinnaker up. We cartwheeled and I fell on it. We taped it back to together on the go as we always carry tape and some spare rope,” Devine said.

Once this job is complete he will head off to spend time with his family and try not to think too much about tomorrow’s race. Devine and his crew, Ian Furlong, are in equal third place with Archie Massey/Harvey Hillary (GBR) and Andy and Tom Partington (GBR).

This is Devine’s fifth World Championship. His best result at a world championship so far was fifth in 2005 in New Zealand. With two more races in the series there is still a chance he could stay on the podium.

Last night’s protest hearing over a top mark collision between Devine and the British team of Richard Bone and Chris Rodway briefly threatened to unseat Devine and Furlong from their third place. “Knowing that we were in the right and then have someone come in and protest you for whatever reason, was disappointing given they never finished the race.  The incident was null and void as far we were concerned,” Devine said. The Jury decision went against the British team which were disqualified from Race 5 leaving the British in seventh place overall.

Tomorrow’s forecast is for a south-wester easing back into the 15 to 20 knot range for Race 6 of the regatta which is scheduled to start at 2pm.