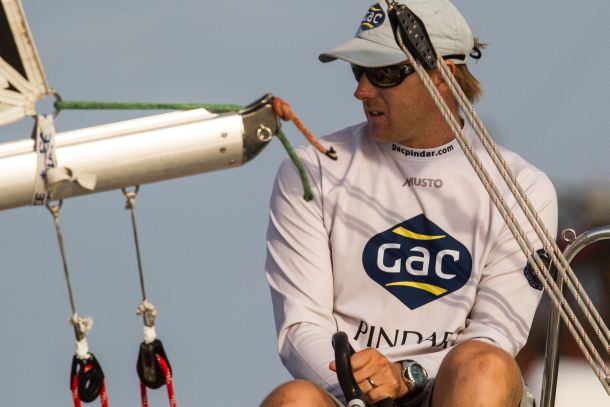 Making your way in the world is a professional sailor is not easy. It’s one thing to build the raw skills required for the job – whether it be as a helmsman, tactician, bowman, trimmer, or otherwise. But the other part of the puzzle, and one that pro sailors aren’t always great at, is the set of ‘soft skills’ – running a campaign, operating a team, finding and managing sponsors, marketing yourself, and so on.

For many years, one of the toughest proving grounds has been the Alpari World Match Racing Tour, the ISAF-sanctioned official World Championship of match racing, which started in 2000. Some of the greatest names of the sport have done battle on the Tour, former world champions including the likes of Sir Ben Ainslie, Sir Russell Coutts, Ed Baird and Peter Gilmour.

Next month, British sailor Ian Williams is bidding to become the most successful Tour champion of all time, looking to add a record fifth world championship title to his resume. If the GAC Pindar skipper can acquit himself well at the Monsoon Cup in Malaysia, this would take him beyond Gilmour, who also holds four world titles. Never mind the prize money at the Monsoon Cup of US$410,000, the biggest prize purse in the sailing world, Williams wants that fifth title more than anything.

Standing in his way, however, is reigning World Champion Taylor Canfield from the US Virgin Islands. Canfield’s team mate on US One, his Kiwi tactician Rod Dawson, also stands on four titles, having won three with Gilmour and last year’s fourth with Canfield.

Aside from the prestige of winning a second world title, Canfield sees winning the Tour as a springboard into other opportunities in the professional sailing world. With ambitions on sailing for an America’s Cup team in the future, his US One crew will be competing on the M32 catamaran circuit this season, as well as competing on the Tour.

Like many pro sailors, Canfield sees the value of cross-training in a variety of aspects of the sport. Even though the 2017 America’s Cup is focused on wing-masted, hydrofoiling catamarans, sailors like Luna Rossa helmsman Francesco Bruni still believe in the importance of testing yourself in top-level competition. While the boats in keelboat match racing are not always the fastest, they require the same split-second decision making, putting teams under pressure. The binary nature of match racing – you win or you lose – leaves you nowhere to hide. Learning to cope with that kind of intensity arms you for whatever future challenges get thrown at you. Recent Tour competitors like Denmark’s Nicolai Sehested and Peter Wibroe know all about that – after running aground aboard Team Vestas Wind on a coral reef in the Indian Ocean during the Volvo Ocean Race.

Russell Coutts pays tribute to long-standing Tour events like the Argo Group Gold Cup in Bermuda, saying that without that event the America’s Cup would never be coming to the Atlantic island in 2017. “It was through that event and others like it that we, as sailors, were able to practice and refine our match racing techniques,” the five-time America’s Cup winner told the Bermuda Gazette newspaper recently.

It’s notable that even with the specialised skills required to steer a 40-knot hydrofoiler, some of the leading proponents like Oracle Team USA skipper Jimmy Spithill and the eponymous Ben Ainslie don’t have a long history of multihull experience. But they have both reached the highest levels of the match racing scene, both being former world title holders.

Tour Director Craig Mitchell, who witnessed the 2013 America’s Cup in San Francisco at close quarters as an on-the-water umpire, is in no doubt about the skills – both sailing and otherwise – that a team develops during a Tour campaign. The speed of the new breed of high-octane foiling multihulls is impressive, but at its heart, America’s Cup racing still places a huge emphasis on the need for quick decision making and strong leadership skills, Mitchell argues.

“Competing on the Alpari World Match Racing Tour is massively challenging and rewarding on a number of fronts,” says Mitchell. “Aside from being the pinnacle of the match racing world each year, testing your tactical skills and your teamwork in a very competitive and aggressive environment, it offers a path to get noticed – by winning arguably the hardest world championship in the sport, and without requiring a large budget. You’re not caught up in a technology race because you don’t need to own the boats. You fly into the venues and you compete using your inherent sailing skills, it’s not always about having a faster boat.

“Of course, money still helps, because it allows you more training time and the opportunity to hone your skills at other non-Tour events. With a total prize purse over $1.4million up for grabs, and with the top three typically winning in excess of $100,000 a year, there’s a reasonable living to be made. And if you really have your act together, such as Ian Williams and his crew, then you can secure the backing of a good sponsor such as he does with GAC Pindar.”

According to an independent report by leading sports marketing research agency Repucom from 2013, the net media value [using Repucom’s Quality Index system] for GAC Pindar’s support of Williams for that year was in excess of $10m. “The advertising equivalent value of the coverage secured by GAC Pindar was well over four times that amount,” explains the Tour’s Executive Director James Pleasance, “but it’s industry practice to measure the net media value as around 25% of that figure. Even so, generating over $10m in value for a sailing team together with the opportunity to earn prize money and a potential world championship title is the appeal of competing on the World Tour.”

This year will be the 16th year of the Alpari World Match Racing Tour with new events and new skippers ready to make their mark on the world of professional sailing. The teams will have to master different boats at each event, one of the unique challenges of the Tour which requires the sailors to adapt quickly to the different boat characteristics and also weather conditions.

To succeed on the Alpari World Match Racing Tour, however, is one of the most credible titles to hold in the sport. Become world champion and the world [of professional sailing] is your oyster. Just ask those that have won it.

The Monsoon Cup finale takes place in Johor, Malaysia, from 10-14 February 2015, and will determine the outright winner of the Alpari World Match Racing Tour for 2014.