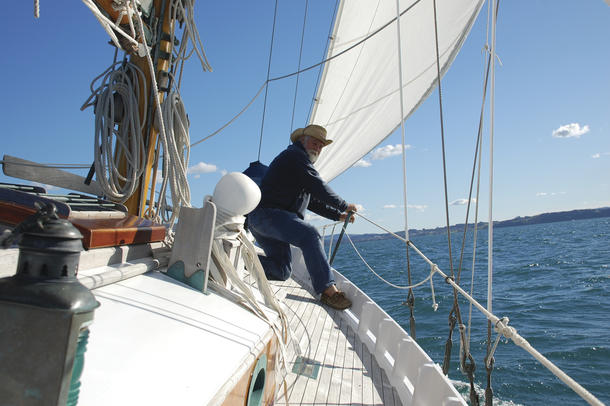 “Have you ever wanted to chuck it all in, give up cruising and move ashore?”

I have been asked this question more than once when I happened to meet someone who had just dropped anchor after a rough passage. Looking back over nearly 45 years and 200,000 miles of voyaging, which did include several really difficult passages, I can only remember one time when, even after a few nights in a secure anchorage, I wondered if I wanted to sail onward.

I have never before written about this event, not because I was trying to hide the fact that I almost lost my enthusiasm for voyaging, but because it was almost unbelievable.

Dusk was slowly gathering when we arrived off the breakwaters leading into Mooloolaba, a laidback resort town just 150 miles south of Australia’s Great Barrier Reef. Near exhaustion, I was eager to be in a secure berth, keen for a good night’s sleep and a doctor.

To say the previous seven days of sailing had been difficult would be to downplay the worst storm Larry and I had encountered in all our years together. It would be fifteen years before we actually wrote about this storm and then only at the insistence of Peter Bruce who was creating a new edition of Adlard Coles ‘Heavy weather sailing’. You can also read the account in our ‘Storm tactics handbook’.

Added to the unexpectedness and severity of the out-of-season 60 hour long blow was the fact, three days prior, I had sustained what turned out to be three cracked ribs when I practiced flying in an enclosed space when I did not secure the lee cloth on my berth.

As soon as the storm winds abated to under 40 knots, though I assured him I was not in any immediate need of help and demonstrated by gingerly getting out of the bunk and cooking up a hot, albeit simple, meal, Larry had begun hand steering, urging Taleisin to windward. It had taken another day and a half to sight this haven, one we had enjoyed visiting just four months previously.

As we approached the coast the winds begun easing back until we had all plain sail set in the eight knot breeze. It was just before dark when we started tacking into Mooloolaba.

The intimidating sight and sound of ten foot, storm-generated waves breaking against a long underwater sandbar just 30 metres inshore of our course was not reassuring. Nor was the two knot out-going current we encountered just as we reached the 75m wide channel between the breakwaters. But what brought our progress to a halt was the wind shadow created by a string of multi-storey hotels cresting the hill just 300m inside the entrance. Try as we might we could not make headway.

“Let’s reach off a bit, heave-to and wait until the tide changes. What’s another four hours after what you’ve already been through,” Larry suggested.

For the next two and a half hours we did just that, jigging along under staysail and mainsail about half a mile off the breakwaters as dark descended. In spite of the large swell, the motion was comfortable; reinforced with some of the painkillers from our medical kit. I cooked some dinner, disappointed that I was not enjoying the café meal I had been envisioning.

Then I tuned in the latest forecast: “Brisbane, storm imminent. Frontal system with gusts to 55 knots.” Larry gave me a hug and said, “sky’s still clear, imminent can mean anything up to six hours. If the storm does arrive before we can tack into Mooloolaba, we’ll just reach out to deep water and wait it out.” His words were still echoing in my ears when I heard someone yell, “Hey matey.”

I climbed gingerly on deck. Approaching us from the direction of Brisbane I saw the running lights of a 10m catamaran. “You guys have a chart of this place? Ever been in here before?” the helmsman called.

“Yes, sailed out Mooloolaba about four months ago,” Larry answered.

“Great, we expected to get here long before dark, but wind fell really light. Don’t have a chart. How about turning on your engine and towing us in since you know the way.”

The second man on Bill Bailey said, “just our luck,” when we informed them we sail engine-free. Then they drifted past us and out of earshot.

I sat on the cockpit combing, trying not to imagine the wind was increasing, looking hungrily towards the breakwaters that offered such tempting shelter, when I noticed what looked like a breaking sea curling right around the point and across the entrance. “Larry, did you see that,” I asked. He reminded me of how tired I must be and said, “the lights from shore could definitely make it look like the inshore breakers were overlapping the breakwaters.”

I watched intently for another ten minutes and became convinced I had been imagining another problem where none existed. Then Bill Bailey came alongside again.

“How about we tow you in and you direct us. We have got to get in ‘cause we aren’t set up for really heavy weather and there’s some headed our way tonight.”

“My wife thinks she saw breakers in the entrance,” Larry called to them.

“Can’t be,” the helmsman on Bill Bailey replied, “just got off the radio with the local coastguard, they said it’s an all-weather entrance and it’s all clear for us to head in right now. Come on, help us get in.”

Larry turned to me, “what do you want to do Lin, you know I’m not comfortable letting someone else be in control of our lives, never taken a tow with Taleisin but it’s up to you.”

“I’m just too tired Larry,” was all I had to say. I tried to turn away before he could see the tears of frustration begin rolling down my cheeks. Larry reached into the lazzarette and got out a hundred foot mooring line, then tossed the end to the crew on Bill Bailey. The crewman climbed to the back to of Bill Bailey and secured the line around the main crossbeam quite close to the seaward hull.

“Lin, I’ll drop the staysail, but leave it ready to go right back up. Be ready to sheet it in and bear away if I decide to cast off. Breeze should shove us right around and get us clear.”

Bill Bailey’s ten horsepower outboard roared into life. Larry took three turns around the cathead on our windlass and stood on the foredeck holding the bitter end of the towline. I stood with the tiller between my knees, chart in hand as Taleisin began to glide smoothly through the rolling swell.

Within minutes we had directed Bill Bailey inshore of one sandbar and found the small bouy marking the inshore shoals. Now, with the leading lights lined up to guide us through the breakwaters, we both lay abeam to the seas, feeling each new roller lift then settle then break into roaring foam just to leeward.

Seconds later, it happened. Just as Bill Bailey was almost inside the protection of the breakwater a wave came crashing across the entrance. Spray flew across our deck as it passed under us but I did not have time to think, let alone react, before the crest smashed into Bill Bailey.

All I remember seeing was her seaward hull rising before my eyes. Then Bill Bailey lay capsized, her mainsail flat in the water, her hull high in the air, her mast only a dozen yards from the leeward breakwater.

Taleisin immediately lost her forward momentum and was almost dead in the water, the threatening inshore breakers seeming to crash within a boat length of where we lay.

Once again it threw spray across our decks, but crested right against Bill Bailey. A wrenching jolt threw me off my feet and onto the cockpit sole. I looked forward as Larry screamed, “I can’t believe it.”

All I could see from my vantage point behind the cabin was a huge shower of spray as Bill Bailey was wrenched back upright throwing the water out of her mainsail with such force that it flew a hundred yards to windward.

“Are you alright,” I heard Larry yell. “Is your motor working?”

“Fuel line got pulled out,” was all I heard before the engine roared back into line. Then, above the roar of crashing waves, the most beautiful words in the Australian language rang clear, “She’ll be right mate.”

For just a moment I lay frozen on the cockpit sole, stunned by the situation I had lead us into. Then I scrambled to my feet and prayed those words were true as I grabbed the tiller and Taleisin slowly gathered way.

Literally seconds later both boats were in the smooth water inside the breakwater. A few minutes after that Bill Bailey’s engine quit and would not restart. But, by then, we had reached the turn into the mooring area.

The water was smooth, unimpeded by the buildings; the six to eight knot breeze blew steadily on the beam and even the well-shaken crew of Bill Bailey could laugh as Larry said, “take our tow line forward, we’ll set some more sail and pull you in.”

As we quietly drifted toward the long pontoon in front of the yacht club Larry called to the two men on Bill Bailey, “really sorry we got you into that mess. If you hadn’t waited to tow us in you never would have been hit by that wave. Sure hope there isn’t too much damage.”

“Man, you saved our lives. Hadn’t been for your boat pulling us back upright, we’d have been in a heap of shit. That wave was just waiting for us. Just didn’t expect us to have someone to give a helping hand.”

Though everything that went underwater was soaked, including a radio that did not survive, Bill Bailey suffered relatively little structural damage. Within three days Larry and the crew had repaired the two frames that were broken.

Over the ensuing years I have often tried to sort out this strange event, tried to think of what we could have done to avoid it, what lessons we could learn from the experience. I can name half a dozen decisions that brought us to that exact spot at that exact time: our decision to rush back to New Zealand for a Christmas rendezvous, which made us try to sail to a schedule; our impatience that made us sail into a storm because we felt we were tough enough to weather the 35 knot squalls predicted by the forecasters; our determination to have one last rendezvous with friends in Mooloolaba before sailing home, we could have headed right for New Zealand on a reach when the southeasterly winds of that storm first blew in.

It was only as I began writing this that the lesson came clear, Bill Bailey’s skipper was right. At some time in every sailor’s life there will be a wave with their name on it. If you are fortunate, as I am sure Larry and I have been, there will be someone there to give you a helping hand.

Safely moored, exhausted and more than a bit shaken, I decided to give up cruising.

But two weeks of rest and I was eagerly filling up the provisions locker with good Aussie wine and treats for the group of cruising sailors who were waiting for us back at our home base in New Zealand. ≈