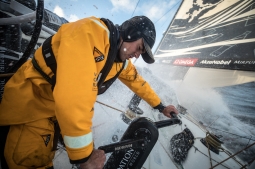 The seven teams were level with the southern tip of New Zealand on Tuesday, having knocked off more than 1,000 miles since leaving Auckland on Sunday.

Throughout the fleet, reports were of a marked change in air and sea temperature signifying their entry to the Southern Ocean, the unrestricted mass of water that flows around Antarctica.

“We have noticed it’s starting to cool down, especially the water,” said Carolijn Brouwer, crew member on Dongfeng Race Team. “We’re heading straight south pretty quickly at about 20 knots. There’s plenty to come ahead – this is just a warm up, or a cool down, however you choose to look at it.”

Ahead of them lies the longest, most testing leg of the Volvo Ocean Race – 7,600 miles through the most inhospitable waters known to man that includes having to round the notorious Cape Horn.

The Volvo Ocean Race fleet is packed with the world’s best offshore sailors, but still the magnitude of the challenge is not lost on them.

“It’s full on, mate,” said Dave Witt, skipper of Sun Hung Kai/Scallywag. “This leg is probably the most rewarding and most stressful thing we’ll ever do, I reckon. The sailing is the easy bit, I enjoy that bit, but it’s the strain on everyone, on the sponsors, on me, on relationships… It’s bloody hard.”

On third-placed team AkzoNobel, Olympic 49er FX gold medallist Martine Grael was psyching herself up for only her second trip into the depths of the Southern Ocean.

“It’s already pretty wet,” she said. “It’s going to get lots colder too. Let’s see how we deal with a whole week of being wet. It’s not going to be easy but I’m looking forward to getting on the highway that takes us all the way to South America.”

The start of a new day brought a new leader as Vestas 11th Hour Racing moved to the top of the scoreboard as the eastern-most boat, while early leaders Turn the Tide on Plastic slip to sixth due to their position further west.

Although still early in the race, Vestas 11th Hour Racing skipper Charlie Enright welcomed the news that his team, back in the race after sitting out Leg 6, had not lost any pace.

“It’s certainly reassuring to see ourselves back on top of the leaderboard,” he said. “It definitively feels good, and it’s a confidence boost for everyone, but at the same time we don’t put too much stock in that because we have a long way to go.”

With a north-easterly breeze continuing to blow, the strategy remains to get south as quickly as possible before turning to the east.

With the ice exclusion zone lying below 50 degrees south, the teams are effectively shortening the distance they will have to sail by heading directly for it.

They will then face a challenging week of heavy weather with winds of between 30 and 40 knots as they gybe along the exclusion zone towards Cape Horn.

One of the few sailors still with a grin on their face was AkzoNobel’s Danish boat captain Nicolai Sehested.

“I actually don’t mind the cold,” he said. “In fact, I’m pretty happy that there are no more hot legs for a while!”