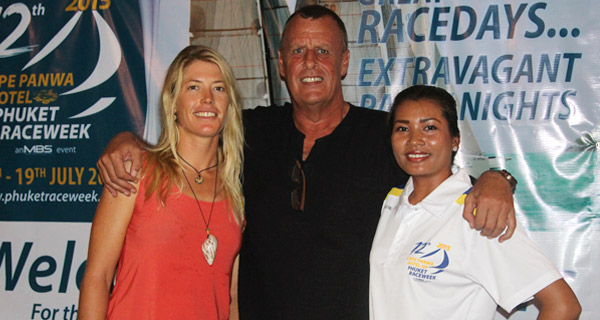 Hot on the heels of recent success by Team SCA in the Volvo Ocean Race, Cape Panwa Hotel Phuket Raceweek organisers are proud to welcome the all-female “Sailescapes Farrgo Ladies” team to the regatta this year. Led by local sailing talent Liz Schoch, they will be competing in IRC Cruising class with Liz at the helm.

“I rarely get the chance to skipper, which for someone who has spent years trying to improve is frustrating. If you don't have the experience in the first place then you are less likely to get the job but it is often hard to get that experience if no one will let you try.”

The female team will be racing on a Farr 1104 donated to the team for Raceweek by Phuket-based charter company and Raceweek Island Partner, Sailescapes.

Owner of Sailescapes, Stuart Crompton, said, “Women racers are very unrepresented generally so anything we can do to promote and encourage ladies to take up the sport we all love, should be encouraged. One of Thailand’s most glamorous regattas now has a glamorous crew. Be warned though, Sailescapes Farrgo Ladies are not there to make up the numbers. They are deadly serious!”

“We're very thankful to Sailescapes for this opportunity. Phuket Raceweek is a great, fun event that supports ladies sailing and gives us the chance to show our skills and spread the power of ladies sailing to the community,” added Liz.

According to Liz, the aim of ladies sailing is to open avenues for women to sail; to learn and progress in sailing by getting the chance women might not have and/ or by being in an encouraging learning environment.

“I try to give the other ladies the same experience by teaching and encouraging the beginners and by challenging the more experienced ladies take on a new role, as well as help me teach others which is an empowering feeling in itself. The fun and social aspect is also remarkable, meeting new and interesting people and often building relationships outside of sailing.”

As the early bird price deadline approached, organisers saw a rush of boats and crews registering both online and at a recent Phuket Raceweek event held at Phuket's Ao Chalong Yacht Club, and as a result the entry list to-date is looking strong in number and diversity. Check out the entry list online, for more details.

“The entry list is shaping up and based on current entries we are looking at having seven or eight classes, including three IRC classes, a charter/ bareboat class, three multihull classes (Firefly 850, Multihull Racing and Corsairs), and depending on final entries, a Classic class,” said Byron Jones, Managing Director of organisers Media Business Services Co. Ltd.

With 14 boats entered in the IRC classes currently, IRC Racing II looks to be the largest with six set for the startline including regatta-regular Stuart Williamson and his crew on Skandia Endeavour Of Whitby and recent Samui Regatta winner, Jessandra II, skippered by Roland Dane.

The two Farr 1104's – Sail in Asia Pinocchio and Sailescapes Farrgo Ladies – are up against Astraeus, Mas Alegre and the all-Thai team on Sansiri Windstar in IRC Cruising while in the Charter/ Bareboart class four Australian crews look set to battle for national pride and class glory.

Multihull sailing and racing is experiencing a renaissance in Phuket recently and with the addition of four brand new Corsair Pulse 600's to the local fleet, they, together with the Corsair Sprint 750 Bullet, will be racing in their own Corsair class.

The always-exciting one-design Firefly 850's return and the racing is expected to again be very close, while the Multihull Racing class is set to be one of the largest in the regatta's history and includes four from the Asia Catamarans shipyard as well as three trimarans – Sweet Chariot, Adrenalin and Three Itch – and the locally-built Nina.

“So far the entries are looking strong, and we know of more that have not yet entered but have told us they will be doing so. There is still time to enter and I urge anyone looking for some top-class racing in the tropics, coupled with some of the best beachfront parties anywhere, to join the fun and enter now,” added Jones.

To enter, go to www.phuketraceweek.com/registration.

With just under one month to go, the Raceweek word has been spread far and wide this year and locally on Phuket things are about to get even bigger. With close to half-a-million people visiting Patong every month, Phuket Raceweek will have pride of place on the Island's largest LED screen in the heart of Patong, broadcasting the regatta and partners multiple times a day, every day to a huge audience.

At the same time, a series of billboards will soon be appearing around the Island showcasing the award-winning Raceweek to visitors, residents and sailors.

Lastly, Phuket Raceweek are proud to welcome back the Sports Authority of Thailand as a Supporting Authority, helping to spread the word about the event and what a great destination Phuket is for sports tourism.