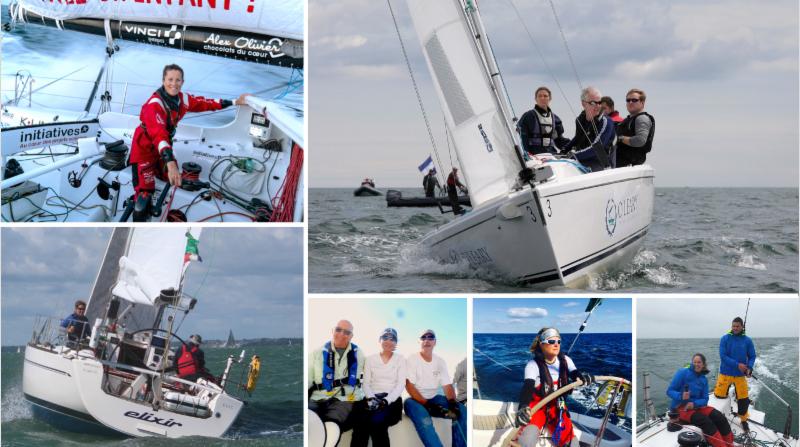 25/06/2019
While crew lists for August's Rolex Fastnet Race are far from finalised, currently just over 10% of those competing in the Royal Ocean Racing Club's biennial voyage from Cowes to Plymouth via the Fastnet Rock will be women. While this is a long way from parity between the sexes, it is at least a step up from races say 20 years ago when the equivalent figure had yet to reach 5%.
To date only one female skipper has won the Rolex Fastnet Race – French solo sailor Catherine Chabaud (with a full crew) on board her IMOCA 60 Whirlpool-Europe 2 in 1999. Dona Bertarelli claimed line honours in both 2013 and 2015 with her partner Yann Guichard on board the 40m maxi trimaran Spindrift 2.
One reason for increased female participation, not just in the Rolex Fastnet Race, but also sailing generally, is thanks to female role models from Tracy Edwards and her high profile Maiden, Royal & Sun Alliance and Maiden II campaigns and, before her, Dame Naomi James and Clare Francis' round the world voyages. Since then there have been the phenomenal, headline grabbing exploits of Ellen MacArthur and the round the world voyages of Dee Caffari. In France there has also been a wealth of accomplished female offshore sailors from the late Florence Arthaud, outright winner of the 2000 Route du Rhum to Isabelle Autissier, and an exponentially large group of contemporary sailors benefitting from their ground work. There are similar, albeit fewer, examples across the globe.
While role models provide the inspiration and the motivation for women, thereby creating the demand, there still need to be opportunities to go sailing. Fortunately these are increasing, albeit too slowly, for those with all levels of experience.
For first timers and newbies, there are more companies offering the chance to buy a berth on a boat doing the Rolex Fastnet Race as well as the required qualifying races. They offer essential training while those expecting to make a longer term commitment to the sport can work their way up the syllabus of qualifications available from the RYA from Day Skipper up to Ocean Yachtmaster.
For women looking to get into sailing professionally the path remains hard, but again more opportunities are gradually becoming available when before they were close to being non-existent. Women's sailing received a huge shot in the arm when a rule change for the last Volvo Ocean Race made it highly beneficial for teams to take at least two female sailors. Introducing such quotas or incentivising teams to take women or young sailors is something which is being slowly adopted elsewhere in competitive sailing. In last year's IRC European Championship for example the RORC permitted teams with two 25-year-olds or two females or one of each to sail with one extra crew. The RORC also has an Under 35 crew competing in the Rolex Fastnet Race on board Tom Kneen's JPK 11.80 Sunrise, which includes two female crew.
On the RORC website today, we publish the case studies and views of six female sailors. They range from the top pros down to first timers: Click here to read more:
https://www.rolexfastnetrace.com/news/899-women-in-the-2019-rolex-fastnet-race
Sam Davies – two time Vendee Globe sailor and former skipper of the all-female Team SCA in the Volvo Ocean Race.
Hannah Diamond – former Olympic campaigner and Volvo Ocean Race sailor, now embarking on an Olympic campaign for the new mixed two handed offshore class for Paris 2024.
Laura Dillon – top Irish amateur female offshore racer, best known recently as the helm on Harry Heijst's S&S 41 Winsome, who will be competing in the Fastnet four up on a Figaro Beneteau 3.
Flic Gabbay – a businesswomen who came late to sailing, who will set off on her sixth Rolex Fastnet Race this year competing in IRC Two Handed.
Catherine Keohane – accomplished cruiser and newbie racer, setting out on her first Rolex Fastnet Race on a chartered boat with the aiming of skippering her own campaign next time.
Nannette Netal – sailor from San Diego, USA who has bought a berth on the Farr 60 Venomous and is competing in her first Rolex Fastnet Race.
– James Boyd