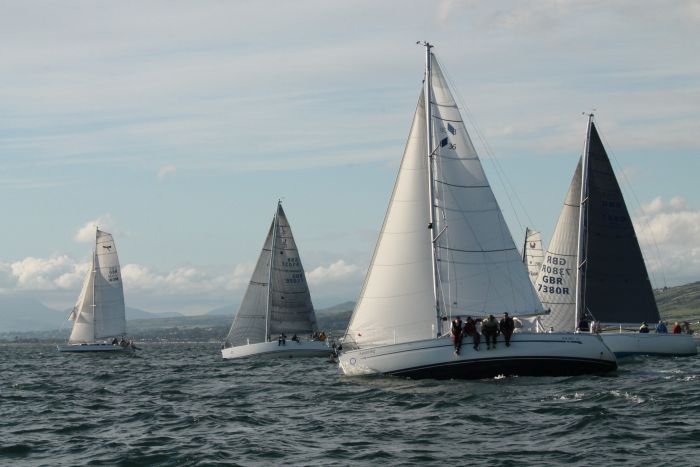 DDMT (foreground) gets off the start line. Photo Ron Howard.

The 42nd Three Peaks Yacht Race had some fast and challenging sailing conditions on the west coast of the UK, and the event rolled the clock back, including a multi-hull category for the first time in 20 years.

The winners this year showed that the race is well suited to cruising yachts with a Bavaria 36 claiming the monohull title and a Broad Blue Rapier Catamaran the new multihull category. Both beat faster racing yachts as they carried their runners up the west coast from Barmouth to Fort William, stopping for them to complete their runs up Snowdon, Scafell Pike and Ben Nevis.

The monohull winners were The Dougie Dalzell Memorial Trust team, who were raising money for a foundation set up in memory of a friend killed in service in Afghanistan, finishing the race in a handicap adjusted time of 2 days 22 hours and 1 minute.

With strong and consistent south-westerly winds for much of the race it was the fastest time for many years and the Bavaria finished ahead of a Reflex 38, Pogo 405 and Beneteau First 40.7 among others. They not only won on handicap, they took line honours and were first over the finish line ahead of the quickest multihull.

Owner Christopher Morris said at the finish, “This proves a cruiser can win this race. We did have the option of faster boats on paper, but their deeper keels would have held us up getting over Caernarfon Bar, into Whitehaven and through the Menai Strait.”

It was in the hazardous Menai Strait, trying to push through against the tide, and taking a risky line among the rocks, that the boat opened up a lead after a fast time on Snowdon by their runners provided the opportunity. From there the team handled the strong winds, and the heavy cloud and rain on the summits, the best. They made the right tactical choices and the least mistakes in a race which always rewards team work and good navigation, as well sailing skill and running endurance.

The boat was skippered by Robert Morris, who was sailing with his father and cousin Toby, and the runners on board were Daniel Ayers and Ben Zeman. They were also the youngest team in the race, and their runners were the second fastest over the 3 summits.

The ‘Kings of the Mountains’ this year were Lawrence Eccles and John Hunt, racing in Team Peak Performers (Sunfast 3200). The pair set a time of 14 hour 54 minutes over the three peaks, a total distance of 54.8 miles on foot and 40 miles on bikes, with 16,500 feet of ascent. It was an impressive performance as the faster sailing this year gave runners much less time to recover between each peak… and more opportunities to be seasick! Eccles, a member of the Penny Lane Striders club from Liverpool, had never even been on a yacht before!

In the new multihull category the first over the line was the trimaran ‘Wandering Glider’, skippered by Michael Thorneloe (78) but on MOCRA handicap the winner was the Peaky Blinders team, on the Rapier 400 catamaran owned and skippered by Chris Ross. The trimaran suffered a catalogue of gear failures in the high winds, including the bobstay failing three times, shredding the spinnaker, and snapping the tiller and try as they might they could not put enough distance on Peaky Blinder to take the win. The final winning time (adjusted) was 3 days 8 hours and 58 minutes.

Alongside the winners the most prestigious trophy in the race is ‘The Tilman Cup’, named after the legendary sailor/mountaineer who inspired the event. To win this a team has to put four people on a summit and this year’s winners were team Fat(ter) Boys in a time of 3 days 20 hours 25 minutes. The team were a group of friends sailing on Richard Colley’s Hallberg Rassy, skippered by Jon Whitley who said, “I would have loved to have done The Ben to put all of us on a summit but I’m not an athlete or trained for it and I’d have been far too slow for them.  I’ll train for next time though!”

The team also claimed the ‘Last Inn Cup’, named and given by a quayside pub in Barmouth, as the final full course team to make the finish line. At the final count all three of the multihulls competing reached the finish line, and six of the monohulls completed the race with two teams dropping to the Challenge class after using their engines.

You can see all of the race coverage, including replays of the live tracking, photos, videos and reports at https://www.threepeaksyachtrace.co.uk/2019-live-coverage,

Next year’s race will start on June 13th and you can find entry details at https://www.threepeaksyachtrace.co.uk