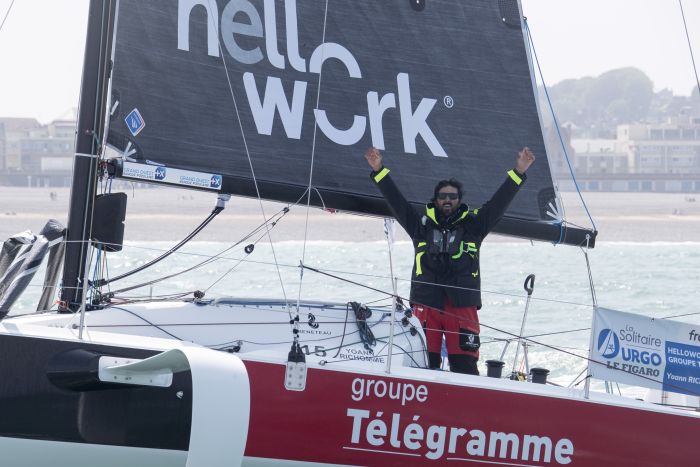 Crossing the finish line of the final Stage of the 50th anniversary La Solitaire URGO Le Figaro this afternoon in fourth place, after 500 miles from Roscoff to Dieppe via Wolf Rock and Owers, Yoann Richomme completed an impressive overall victory, winning ahead of second-placed Gilda Mahé by one hour and 13 minutes after a total of 14 days, 2 hours and 20 minutes of racing.

It was Eric Peron (French Touch) who won the final stage, but all eyes were on Richomme as he crossed the line off Dieppe, and left the helm of his HelloWork-Groupe Telegramme Figaro Beneteau 3, to punch the air with delight.

Drenched in champagne on the dock the now two-times La Solitaire winner smiled and said: “I am really moved. I’m lost for words. I never thought I’d win two. And it’s a special edition too. A couple of months ago after the Route du Rhum I didn’t know what I was going to do. But I have just got two great wins within seven months. It was a team effort. It was long and tiring. I almost took the lead last night but fell asleep. For a couple hours I was thirty degrees off course. The slightest metre lost and you lose a lot. This was a really tough event, which is what it should be. You need to work hard to win and that’s what it should be like. I don’t remember spending as much time out on the water with previous races. It’s been a fantastic edition.”

Richomme, a masterful, meticulous boat technician who won last year’s highly competitive Route du Rhum-Destination Guadeloupe in Class40, has today written his name into the La Solitaire history books as the first ever skipper to win the multi-stage event racing in the new foil-assisted Figaro Beneteau 3.

Up against the most competitive fleet ever on one of the longest and most open, varied and challenging courses ever, this was Richomme’s eighth participation, and today he became the eighth member of an exclusive club of solo racers who have won La Solitaire twice. Only five skippers have now won the unofficial world championship of offshore racing more than him: Yann Elies, Jérémie Beyou, Jean Le Cam, Michel Desjoyeaux and Philippe Poupon.

As a late replacement for Charles Caudrelier, the Volvo Ocean Race winning skipper and 2004 La Solitaire winner who was due to race the boat, Richomme has raced without the pressure to deliver a result. He only took over the boat just over one month before the start of the race.
After winning in 2016, he moved out of the Figaro Beneteau 2 to pursue other projects including his aim to compete in the Vendée Globe and advising on the development of the new Beneteau 3 boat.

It is a conclusive win for the 35-year-old naval architect from Lorient emerging from one of the longest and most difficult four stage courses in the history of the race. His victory is completed at the top of a star studded line up, comprising some of France’s most successful solo racers including three times winners Yann Eliès, Jérémie Beyou and Michel Desjoyeaux as well as the two-time winner Armel Le Cléach, the most recent winner of the Vendée Globe.

Richomme won the first 540-nautical mile stage from Nantes into Kinsale. His astute tactical choice, sailing the direct course across the Celtic Sea anticipating the breeze to go slightly east of north, immediately set him well clear of some of the top seeds who tacked west at Ushant. Although he was just 1 minute and 13 seconds clear of second placed former French Olympian Pierre Leboucher at the Irish finish line, hotly tipped Yann Eliès was already 4 hours and 7 mins behind and Beyou 8 hours and 29 minutes

Keeping up the pressure on Stage 2, he paced his attack beautifully on an alternative course from Kinsale to Roscoff via the Scilly Isles and a Needles mark to the west of the Isle of Wight, finishing second 12 minutes behind Adrien Hardy.

The skipper ,who always listens to podcasts when he races – he says he could not do without them – even retained his super cool, relaxed composure on a mind crunching Stage 3 when three skippers ran away at a memorable tidal gate at the raz de Blanchard, the sluicing tidal gate between the northwest tip of Alderney and the Cherbourg peninsula, and put more than 60 miles on the fleet who were stuck for more than five hours. Richomme finished 13th, more than nine hours and two minutes behind Anthony Marchand (Groupe Royer-Secours Populaire).

When Richomme won his 2016 La Solitaire title in La Rochelle, against a less competitive fleet, it was by just five minutes and five seconds. Reflecting on his first win, he commented:
“It was very different from the first time with Charlie (Dalin, his Macif teammate who finished second in 2016). With Charlie we had both trained a lot and were close in the rankings. This time I think it was tougher. Then, there was the new boat. What helped me, was I didn’t have any pressure on me as I started out so late and I wasn’t worn out. What I learnt was what I picked up in Port la Forêt during the winter and then I did it my way.”

Compared with some of his rivals Richomme, who was born in Fréjus in the south of France, is something of a late starter to offshore racing. It was 19 years ago on a family cruise across the Atlantic with his father that his passion for sailing offshore was really ignited. In 2003 he enrolled on a yacht design degree course at Southampton Institute and immediately set up a student project to compete in the 13-stage, 1,000-mile Tour Voile fully-crewed race around France. He managed three subsequent Tour Voile projects. Against competition from all over France, he won his selection to the Skipper Macif project in 2014, the talent hot housing initiative which revealed French ocean racing golden boy François Gabart. He continues to train with the Pole Finistêre group which has produced 16 winners of La Solitaire but, coming in as a late substitute, had much less initial training time than many of his contemporaries.

Initially Richomme worked as preparateur for La Solitaire winners Charles Caudrelier and Nicolas Lunven before starting out on a low budget Solitaire programme in 2010, going on to finish second rookie. It was only on his third attempt at the Skipper Macif programme that he was chosen. He confesses to a ‘maniacal obsessive attention to detail, to engineering and analysism’ but is prepared to always make his own choices and stick by them.

In a moment of self analysis he says of his approach to offshore racing: ”It is about preparation, meteo and setting up the boat. That is what makes me tick. I don’t subscribe to the mythology of man and sea. I don’t get a particular pleasure in sailing solo. Sailboat racing is first and foremost a mechanical sport. For me, it's about engineering, especially today when we reach staggering technical standards. It's a world which inspires me and where I feel good.”

Amongst the competitors in this years’ memorable anniversary edition were seven non-French skippers. Finishing 22nd on the final leg, Briton Alan Roberts (Seacat Services) will receive the Vivi Trophy for the top international finisher in the 47 strong fleet, with Swiss competitor Justine Mettraux (Teamwork) finishing as the second placed international and Briton Will Harris (HIVE Energy) in third, in what is only his second ever La Solitaire.

Commenting when he hit the dock, Roberts said: “That was a hard leg for me. It was identified on the second leg of the race and cemented on the third leg that my spinnaker was not very quick. As soon as there was chop and anything outside of eight to 12 knots range. And I knew this stage would be 50 per cent downwind at the exact angle that was not good for me. I knew there would be opportunities and I just needed to take them and minimise the collateral when it was bad and go well when it was good.”

“My Solitaire? It was good overall, I’m disappointed about my speed but overall I sailed well. I took a risk and did something different with the sails, it paid off with the gennaker but didn’t in others. But that is the game. All in all I am happy. I am sailing quite well and making good decisions. I am happy to be the first international for the Vivi Trophy, hopefully I can make it the double, the Solitaire and the Vivi.”

The 50th Anniversary edition of La Solitaire URGO Le Figaro has been a particularly special affair, amplified by the new boat, unusual weather conditions and an impressively strong field of entries, which have produced an exceptional event from start to finish.