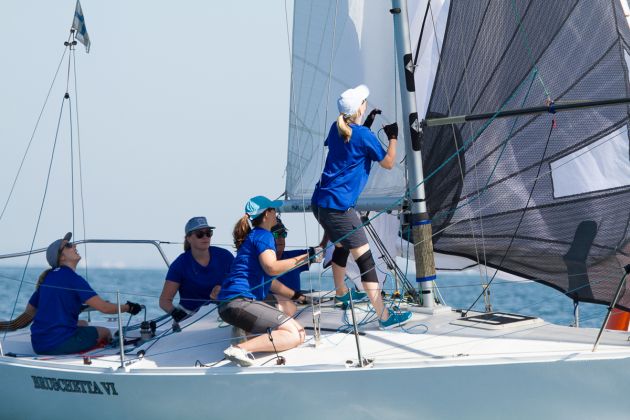 08/02/2016
The 2016 Port Phillip Women’s Championship Series kicked off on Sunday February 7, with the Women in Sailing Challenge (WISC). Hosted by the Sandringham Yacht Club, this first stop of the series saw 18 boats and nearly 100 women hit the start line with the aim of seeing their name forever engraved on the Dorris Little trophy and to build the points profile for the event.

Conditions saw the breeze build steadily flicking between a S and S/W direction. With hardly a cloud in the sky, light winds and 30 degrees sunshine it was the perfect setting for this prestigious event. These inviting conditions seemed to settle the nerves of some of the new skippers and crew out there.

Local sailor and Race Officer for WISC, Steve Aulich, was delighted to see the camaraderie and the shared knowledge co-exist between the seasoned female sailors and new blood: “Despite everyone competing against each other there is a real sense of teamwork seen on the water. We couldn’t have asked for any better conditions today. There are some very good sailors amongst them and it was good to see it all coming together in that second start.”

For a number of teams, WISC was the first time they’d been racing this season and for some boats the first time they’d ever sailed with some of the people on board. As teams began to become familiar with each other and roles became more defined there was notable skill progression seen across all boats over the course of the day.

Emerging talent, Steph Strong, noticed that she and her crew became progressively more in tune with the racing over the day: “The conditions have been kind to us and have allowed us to ease into the start of the series. We felt like we were getting back on our feet in Race One and in Race Two we were a bit too keen and unfortunately locked in too early and received an OCS (On Course Start). Despite liking our position on the start line and good fleet positioning we learnt from this and applied it to the rest of the races. Overall, we’re very happy with our crew work.”

For other boats, they were able to reflect their strong results with the training they had done. Hugo Ottaway’s Bruschetta felt the riches of a training program when skipper, Pauliina Mattila, and crew just slipped back to second on countback in the AMS ratings and second overall in the Performance Handicapping System. Ottaway, who also sailed on the boat, explained the significance of such a good result: “We trained four times this week, so when we came out on the water today we felt like we were ready and could focus on the actual racing and not how to handle the boat.”

Ottaway also boasts having a multinational crew on board with all members being from overseas. From Finland there is Pauliina Matilla (skipper) and Sonja Schalin. From Greece is Maria Basardani and from Tasmania (still technically overseas), Madeleine Linton.

“Although the Finish girls have a cruising background they’ve not done a lot of racing. For Sonja, this is her second time racing ever; the first time was in a twilight race on Thursday. We’re very proud of what we have accomplished and put it all back down to the training we did prior.”

The day in it’s entirety was a great success; four races were completed and a series has begun. A big thank you goes to all the volunteers who made this event happen including the WISC committee and the on water race management.

Results for the top three in each division were as follows:

The next stop of the Port Phillip Women’s Championship Series is the Val Hodge Trophy, hosted by the Royal Yacht Club of Victoria, on Sunday the 21st February. For more information on this next race please visit the Women and Girls in Sailing website.