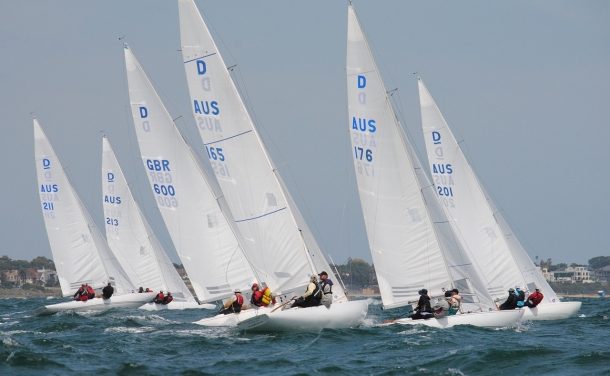 The Dragon gets away for race two of the Prince Philip Cup. Photo David Staley / RBYC.

Wolf Breit from Royal Sydney Yacht Squadron has sailed “Shapes” into the lead after one day of racing in the Prince Philip Cup – the 2015 Australasian Championship for the International Dragon class.

A steady south-westerly gradually freshened from 15 to 20 knots over the afternoon, with moderate waves on Port Philip providing some excellent racing conditions.

Breit and the crew of “Shapes” scored 1-2 today and their consistency rewarded them with a 5 point buffer at the top of the table.  The experienced crew includes the Rolex Sydney Hobart winning skipper of “Wild Rose”, Roger Hickman.

The next five boats are separated by just two points, so the competition is expected to be very tight over the next three race days.

Sandra Anderson’s “Liquidity” (WA) and Gordon Ingate’s “Whimsical” are tied on 8 points, although Anderson has the break to hold second place tonight.  Jeff Rose (VIC) helming “Ridgeway” and Christian Boillot (VIC) with “Imagination” are both on 9 points while Raymond Chatfield (WA) and the crew of “Wizzardry” are on 10 points rounding out the top six boats.

Robert Campbell (GBR) and the crew of “Indulgence”, winners of the Ted Albert Memorial Regatta yesterday, were OCS in race two today.  They were second over the line in the first race behind “Shapes”, so have plenty of pace and but be looking forward to race 5 when the OCS can be dropped.