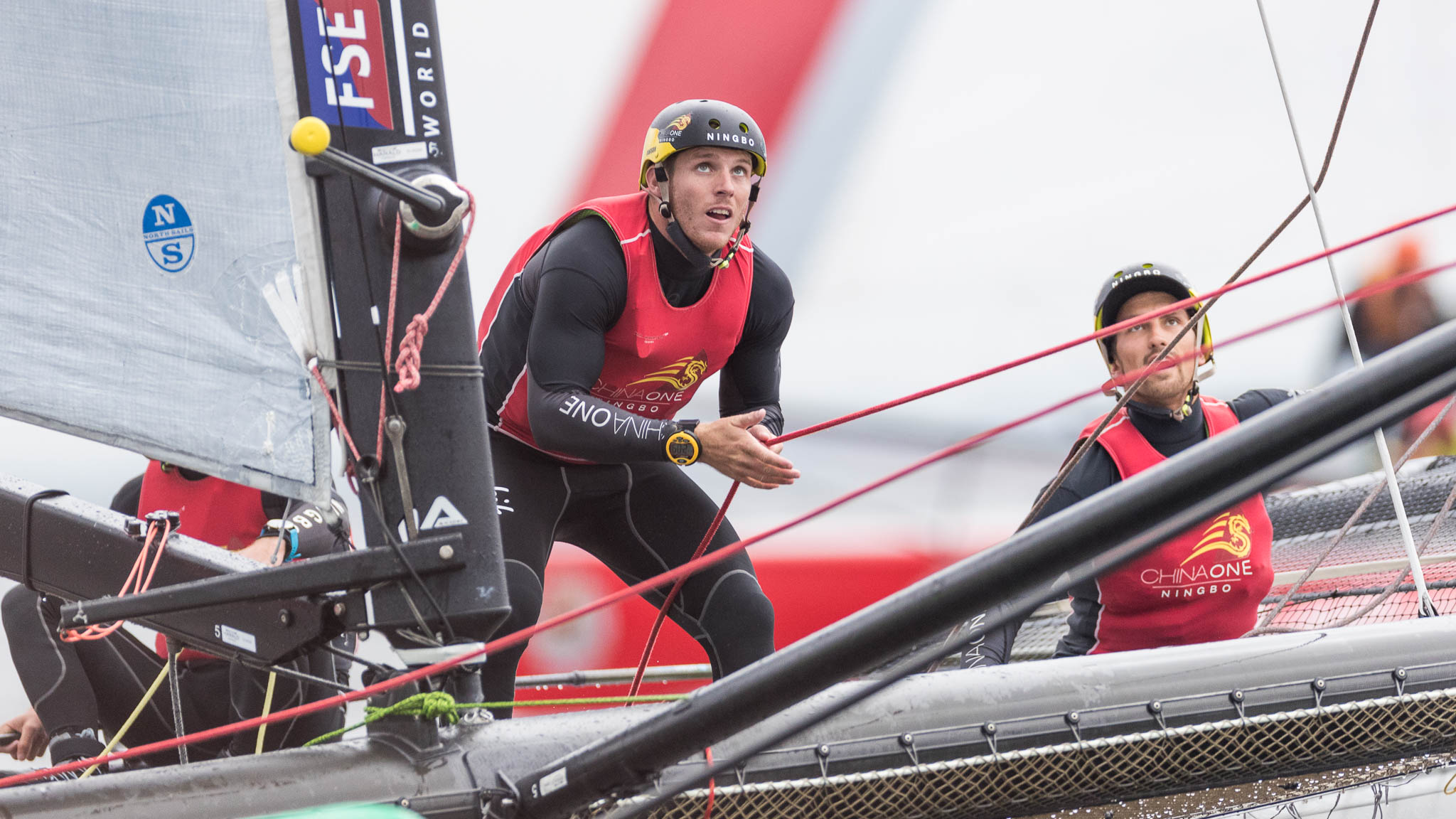 Wednesday, August 2, 2017 – Pieter-Jan Postma, possibly the most laidback speed demon in the world, proved two things at the WMRT Match Cup Russia at St. Petersburg Yacht Club today; firstly, that even in his debut year on the World Match Racing Tour he is a greater force to be reckoned with each event, and secondly that Phil Robertson’s conveyor belt of victories should not be taken for granted.

Robertson (CHINAone Ningbo), the current Match Racing World Champion, has been punching top spots like a machine and is this year’s clear leader. He was ahead in Group 1 after the first qualifying session but found today’s second session more complicated, as he finished third in the group.

“It was a very strong group, and to beat Phil (Robertson) and (Matt) Jerwood in this fleet – super stoked with that,” said Postma (Sailing Team NL) who has taken a unique route to the WMRT from being a Dutch Olympic Finn sailor. “I’m really happy with how it’s going and we didn’t expect this yet. We’re ahead of where we thought we’d be.”

At the press conference, Robertson looked like a man itching for Thursday to come. “We had a bit of a difficult day, but it’s good,” the New Zealander said. “It’s coming to the business side of the regatta, so it’s nice to have a big kick and make sure we’re switched on for tomorrow.”

But Robertson, has often been beatable in the qualifying fleet races, only to show his strength once the match racing starts in the SUPER 16 stage. His thoughts were echoed by Postma. “After these two days it’s easy to feel good, but tomorrow is back to basics,” he said. “In match racing it’s so easy to lose.”

Postma finished Group 1 level on points with Perth’s Matt Jerwood (Redline Racing), but went top by virtue of count back  winning the last race. Jerwood went into the last race leading the group after winning the second and third races, but could only finish fourth in the last. The strength of this group of death was underlined by the role that Russian Victor Serezhkin (Gazprom Team Russia) played on day two, picking up two second places, the second of which came crucially in the second race.

Serezhkin led off the start and for half the race before Postma reeled him in, swept past him and flew away. “We needed to choose whether to fight for the pin end, which everybody wanted, or you give yourself some space,” Postma said. “In the last race, I thought it was too crowded at the pin end, so we went for some separation and then we charged over the top of that group.”

In the middle Qualifying Stage, Yann Guichard (Spindrift Racing) had felt something similar to Robertson, as, after three bullets on Tuesday, he had to settle for four second places on Wednesday. But the Frenchman’s consistency ensured that he comfortably topped Group 3 and enters the SUPER 16 as top seed. Måns Holmberg (Gothenburg Racing) won the first two races and Sam Gilmour (Neptune Racing) the second two, twice denying a charging Guichard in contests that resembled match rather fleet races. Gilmour dipped into his glossary to explain why he enjoyed the conditions and courses more on Wedneday, saying Tuesday’s were “soldiers’ courses – following each other going back and forth with no overtaking opportunities.”

In a morning marked by heavy rain and light winds in Neva Bay, Britain’s six-time Match Racing World Champion, Ian Williams (GAC Pindar) finished top of Group 2, but not quite in the way expected after receiving a black flag and two penalty points in the last race for a dramatic crash with Sweden’s Nicklas Dackhammer (Essiq Team Racing). Both boats were OCS at the start and were at the back of the fleet rounding the first reaching mark when Williams attempted to gybe behind Essiq Racing Team but succeeded only in ramming them, breaking a bowsprit strut of and their rivals’ rack.

As well as a last place finish, GAC Pindar, who had won the first two races of the day, received two penalty points to leave them on 19 overall, which, as expected proved to be the lowest of the three group winners, making them third seeds in the SUPER 16.

America’s Markus Edegran (E11even Racing) took advantage of the chaos behind him in the last race to score his first win of the Qualifying Stage and edge the battle-within-the-battle against Denmark’s Jonas Warrer (Aarhus Innovator), who he passed on the final downwind.

Another American, Sally Barkow (Team Magenta 32), the only female skipper in the event, put together their best race of this season. They stayed strong in the third race after leading off the line, holding off a charge from GAC Pindar and E11even Racing on the upwind beat and enjoying it on the final downwind.

The Sail-Off tomorrow morning between the bottom teams from each of the three Qualifying groups will eliminate two teams and decide the final make up of the remaining 16. The first Sail-Off will be an all-Russian affair between Evgeny Elfimov (M1 Cloud) and Evgeny Neugodnikov (Team Tavatuy), the winner of that will face Polish skipper, Lukasz Wosinski (Delphia Sailing Team). The winner of the that will face Frenchman Guichard.