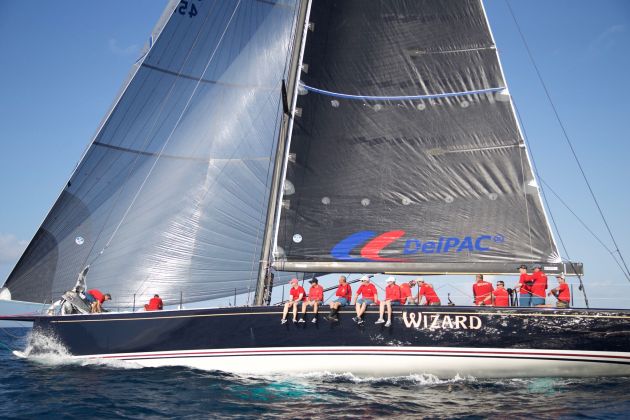 FEBRUARY 6, 2017 – Montego Bay, Jamaica – Peter and David Askew’s Wizard crossed the finish line in Montego Bay at 9:00:15 ET this morning to capture line honors in the 33rd Pineapple Cup – Montego Bay Race. One hour 38 minutes and 50 seconds behind Wizard was the Shelter Island Partners Prospector, which was enough to propel them ahead of Wizard to 1st in IRC. If the results stand, Prospector will be awarded the Pineapple Cup.

Paul McDowell, co-owner, Prospector, “This was our first time doing the Pineapple Cup — Larry Landry, Dave Siwicki and I. We bought a Farr 60 a few years ago to do bucket list races. We did the Transatlantic Race, we did the Fastnet Race, we did the Middle Sea Race, some of the iconic ocean races. And we had so much fun doing that, we said 'let's buy a boat that’s bigger and faster and even more exciting and let's continue to do all these different programs’.

The Pineapple Cup was one of those races that you remember from way back in the day. I used to do a lot of IOR races in the 1980’s, so you’d see Kialoah and Windward Passage win [the Pineapple Cup]; some of the greatest ocean racers of all time have won this race. So we said ‘this has got to be one on our bucket list that we have to do, the Pineapple Cup.’

And so here we are! The race couldn’t have been better, it really was spectacular all the way along. It’s one of those rare things where you get to race through amazingly scenic islands, the weather is good, the wind is from the right direction, and you come to a spectacular place.”

Peter Askew, Wizard, Co-Owner said, “This was my first time doing the race, I thought the course and race were great. I grew up in the days of IOR boats and always wanted to do this as a kid and was happy to be able to do it. Dave [Peter’s brother] and I bought this boat so we could go around and do a bunch of these races that we always admired doing, so it’s fun. Downwind once we turned from Cuba in was awesome. The boat does really well in that type of stuff and reaching down the Bahamas was really cool. It sure beats a bad day at the office and I would love to come back and do it again.”