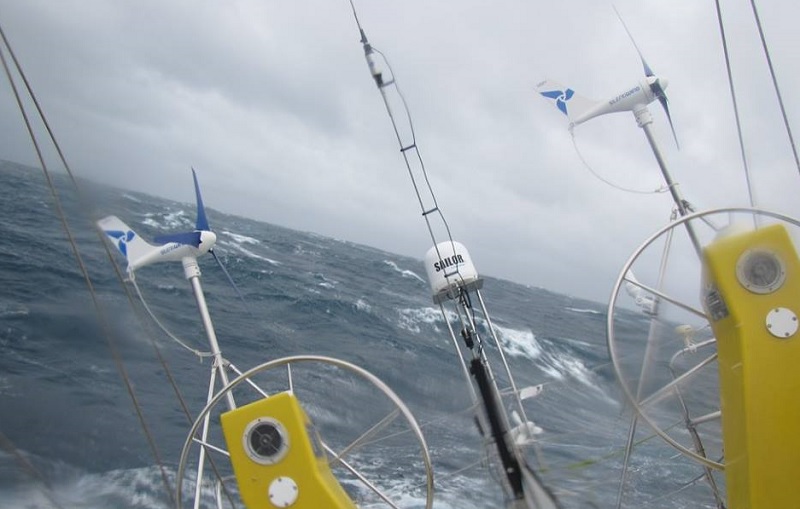 Well the day started out eventfully and didn’t really stop.

Lying in bed looking at the B&G Zeus Multi-Function Display I was trying to figure out if I needed to Gybe now or if I could get away with waiting for a bit longer. As I lay there pondering this thought, I felt the boat shoot off like a rocket. Glancing up at the display it was climbing …..14 knots….. 15 knots…… 17knots……. finally topping out at 18.7 knots of speed. Wow, I must say that this is the fastest I have been in bed before…

After my wild ride I decided that I needed to put that gybe in after all. I don’t tend to find Gybing my 50-foot yacht Climate Action Now very difficult. It's a procedure which takes me about 15 min to complete. This is because I need to change running back stays and preventers as well as move the main sheet to the other end of the traveller. As soon as the preventer is let go I potentially could be put into an uncontrolled gybe so the pressure is always on to get that mainsheet secured.

This morning’s gybe went like clockwork, even in the messy seaway. The winds had backed from a NNE to a WSW settling on a true wind direction of 240 while jumping between 20-37 knots with a bit more wind expected later today. The swell was approximately 4-6m.

I went about my checks and chores and even managed to sneak in another nap. All the while listening to the winds starting to blow a little harder and feeling the boat getting shoved around a little bit more. I decided around lunch that I would pop on deck for a little while just to check it out and see if I could perhaps adjust something to steady the boat. I fiddled with the trim and the B&G Auto pilot and got the boat to its most comfortable setting.

While I was on deck I caught a flash of black and white again. My dolphins that look like killer whales were back. It was only the one this time and he/she stayed for about 5 minutes trying to figure out what I was. You could almost see it thinking as it hid in my wake just off the stern. I guess they don’t see many boat's out this far…

I went below and fixed myself some lunch. An Arbonne protein shake matched with some Salada biscuits and cheese. Yumm… While I was quite contented eating my lunch, the sea had other ideas.

About halfway through a massive wave cracked against the hull almost beam on with such force that the boat was instantly thrown sideways. Stuff (my lunch included) flying everywhere. I braced myself in the galley sitting on my lovely little seat that Henry had made. The wave had hit in such a way that the boat went from 10 knots to almost a complete stand still. I thought for sure that I would have broken something. I popped my head out the perspex viewing dome to check. I could not see anything amiss. I was lucky.

I once again went on deck to check everything and decided that it was just an unlucky glancing hit from the waves. The swell didn’t look that dramatic to me however there was a bit of a messy cross swell.

I cleaned up down below and finished my remaining lunch. Shortly after though I was upended once again by another wave only this one didn’t slow me down ….. it sped me up. As the boat laid over I could feel the boom starting to dig into the water……. BANG……. A loud snap and I knew right away that I had broken the preventer line again. This means that I need to go right out on the bow of the boat to retrieve it.

I decided it was time to get completely kitted up. Boots, salopettes, jacket and waterproof hat. It wouldn’t take much for me to get completely soaked by one of those passing waves. I geared up with lifejacket and safety line and slowly made my way up to the bow. Holding on tight and thinking that I really must start wearing my gloves (the only item I didn’t put on). …. It is getting very cold with 10c air temperature and the added wind chill factor, my hands were really burning this time.

I neared the tip when the boat moved suddenly under me just as I stepped on to the orange safety circle painted on the bow. I came crashing down on my right knee landing with the bone of my knee on a rope on the deck. Ouch! That really hurt.

It turns out the orange paint is very slippery. Ignoring the pain, I did not want to stay here very long as it only takes one bad wave for me to get completely submerged, I got the end of the preventer line which was trailing in the water and noticed that this end was all intact. This is good news as it was one of the new ropes on board. I must be the end at the boom that snapped.

Almost all my ropes are Lancelin supplied to me by MY Yacht in Sydney and are of a great quality. The rope that broke is one of the original ropes on the boat. I did this for two reasons. One….it was already the right length. Two ….. it would be weaker than the boom. My reasoning being that if something was to break I would rather it be the rope than the boom as the boom is much harder to fix.

Once I had limped back to the cockpit I re-tied the two ends of the preventer together. I re-set the main sail out for a broad reach trim. The pain in my leg was mostly gone by then but I am sure that I will have a nasty bruise to show for that little slip tomorrow.

As I always when I go out on deck I spend a few minutes watching everything and taking it all in. I was looking out towards the back of the boat watching the swell. I was trying to figure out where those extra kicks had come from. I couldn’t see much in the way of a large wave until after about five minutes this monster reared up behind me.

It was at least three times the size of the rest of the swell. When I was in the trough looking up, the peak would have been at least the height of a two storey house. Typical of me I was grinning from ear-to-ear. As scary and as a powerful wave like that can be, I am always so impressed by them that I just can’t help but smile.

My monster passed peacefully underneath me followed by another almost a large. Well at least now I know why I was shoved so hard.

Anyway all in all an eventful day in the middle of nowhere in the Southern Ocean. Here's to an uneventful evening.

Can’t say I've had much sleep with the winds at 40 knots though the night and dropping of to 5 knots at around 4am this morning.  The boat went from getting shoved around by wave after wave to wallowing in the swell.  It was just a touch frustrating.  Add to this the winds backed and veered throughout the night causing me to make constant course adjustments swinging between NNE to SW and back.

I finally gave up on sleeping at around 9am and decided that if I have no wind then today is a good day for maintenance.  After breakfast I finally set about trying to get the boat to move and packed away my smaller jib that I have been using non-stop and unfurled my no 1 Jib.  The big one on the bow.  I was hoping that this will help move me forward in the dismal 5 knots of wind I was experiencing.  One job that I have been wanting to get to and have been waiting for the right break in the weather to do it is the batten that is sticking out of its pocket.

For any non-sailors out there we use Fiberglas battens sewn into the main sail to help give it a nice curve.  This makes us go faster…  We my second batten from the bottom between reef 1 and 2 had popped out of the pocket at least that’s what I thought.   To do this I would need to drop the main sail so I didn’t bother to adjust from the 3 reefs in the morning.

Straight from the Southern Ocean

I was scheduled for a radio interview at lunch so figured I would wait until after that to get stuck into it.  As there was very little wind every 10 min or so the b and G auto pilot would start beeping insistently at me.  It was the off-course alarm.  It is very hard to hold a course when the boat is moving at 0.5 knots…

After a successful interview I set about getting the main sail down.  This done I finally had my first look at the batten.  Bugger…  Instead of just working its way to the side and poking out the batten was sticking through the middle of the batten pocket.  This is a job that requires some sewing.  Normally we have these little black triangles on the end of the battens to spread the pressure on the pocket however this batten was missing it’s on and had poked a hole though.

I gathered all the tools and set the boom where I could work without losing all my tools in the water or falling over board.  I then sewed a small patch on to the batten pocket and re-lashed in the batten.  Success it only took me 2 hours…

With the job done I also wanted to do some other jobs on the bow so I hoisted the main sail up to the 2nd reef.  I had a very slight breeze by now and was gently moving along in the water.  I needed to work on the head sails so I sailed off the Jib 1 while I worked on Jib 2 and then switched.  The job was this.  Where the sails are attached to the furler I had put a big snap shackle joining the two together.  I had noticed that the bulkiness of the shackle was chafing into the furler.  Not a major issue short term but long term could create some issues so I decided to bypass the shackles and lash the sails with some 4mm spectra line.

When I had finished with the Jib 2 and began working on the front jib I was sitting with my feet dangling either side of the bow.  After completing the job I ended up just sitting there for almost an hour admiring the beauty of the sky and the water.  The ocean here is the most incredible colour blue, almost electric.  There was one big Albatross just flying around and I was very lucky just to have the chance to appreciate it.  Moments like those are what make a journey like this worth every effort.

So after my little slice of piece I have been catching up on some computer work and sitting in the nav station listening to the sails flog…  Looks like there won’t be much chance of sleep tonight either.