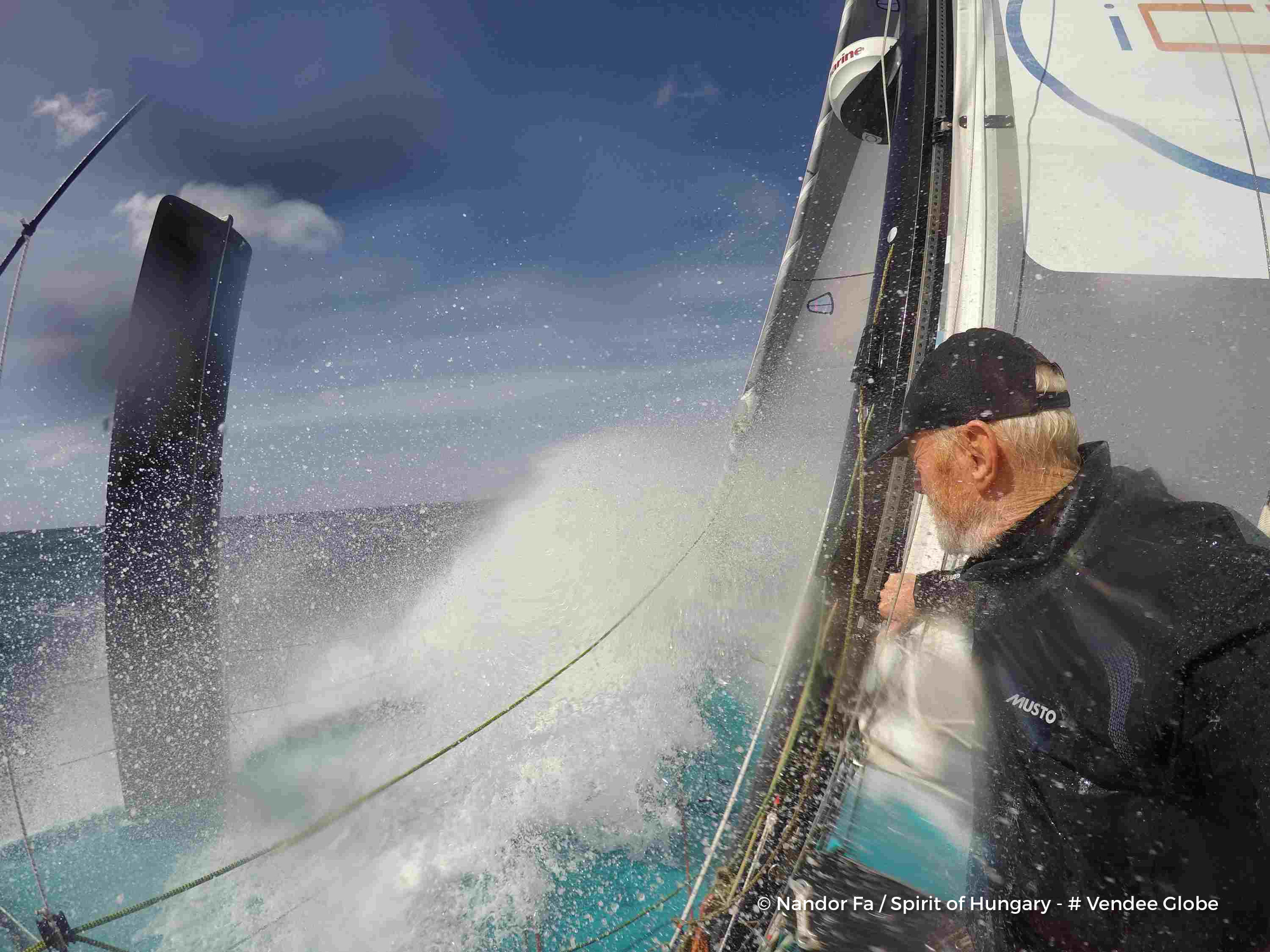 Nandor Fa has been enduring some of the toughest conditions of his Vendée Globe just 1300 miles and some four days before the finish line. Riding the southern side of the low pressure system which has battered the French Atlantic coast, the Spirit of Hungary skipper reported winds of 48-50kts with big seas, encountering random strong squalls and gusts of more.

Worried about his boat and equipment after 25,500 miles of racing around the world, Fandor has stepped up his checks on the boat and his rig but reported to his team today that everything is good.

The latest routing run by the Hungarian skipper suggests the finish line during Tuesday afternoon or evening. Indicative of how fatigued and determined he is, Fa has indicated that he wishes to cross the line as early as is prudently and practically possible. And so there seems little chance he would slow in order to postpone his line crossing until daybreak Wednesday.

If Fa in eighth place is getting something of a sting in the tail of his Vendée Globe, an unwelcome test close to the finish, so it looks also like there will a new challenge for both Arnaud Boissières and Fabrice Amedeo in 11th and 12th places respectively. While it looks like a realtively straightforward weather scenario and routing in for Eric Bellion in ninth and Conrad Colman in tenth, the low pressure system is then set to be replaced by a high pressure extending over Biscay in a slightly similar way it did for Armel Le Cléac'h and Alex Thomson.

According to Amedeo their race is now likely to take another two days to the finish line, placing an even greater pressure on his already limited food supplies.

” I am in the NE'ly trade winds since yesterday. I am bouncing and slamming upwind. It is quite grey and there is quite a swell. Our time in the southern hemisphere is over. The flying fish and turquoise blue seas are gone. It is a radical change of scenery since the end of the Doldrums. We are on the road home but the scenario towards the end of our race now looks quite uncertain and looks set to make our race last longer.”

” Right now is it is not really much fun. We are slamming and it is hard to move around the boat. I move from the chart table to the bunk. I think our conditions are a bit better than Eric Bellion's. We have about 25kts and he has about 30. And it looks like we will have this until Monday then it should ease.”

” At the moment I'm beam reaching and I am looking to get around the Azores high. It is going to be very west and so we are going to be forced to make a huge detour to get to France. It looked like it would be the 16th before but now this detour, the additional miles north and west, will probably add another couple of days, making it more like the 18th. Even so this all a bit of a guess right now, how it looks. There will be a low on the Portuguese coast and to the west is the high pressure and so it will be a long way around.”

” It is hard for the morale now to see everything extend a bit more, but the finish line will come. Even so I have to be super careful now with my food. I have to ration what I have and I am tired and have to be careful how I move around the boat. I take care to have the boat well balanced. There are not many manouevres to be done, it is J2 or J3. But when we get to the Azores high it will be more work and I will have to be more alert. So I am going to rest as much as I can right now and build up my reserves over the next 2-3 days.”

” I converse with Cali (Arnaud Boissières) by email. This morning I asked him if he had shed a tear too. He answered that he sees the same thing and we need to plan for the go-slow. I managed to watch a few movies in the south, some real turkeys, but now I prefer to listen to the boat, to know if I have to shorten sail, to trim, to make adjustments. Really, right now I have trouble disconnecting and thinking of anything much else other than the boat.”