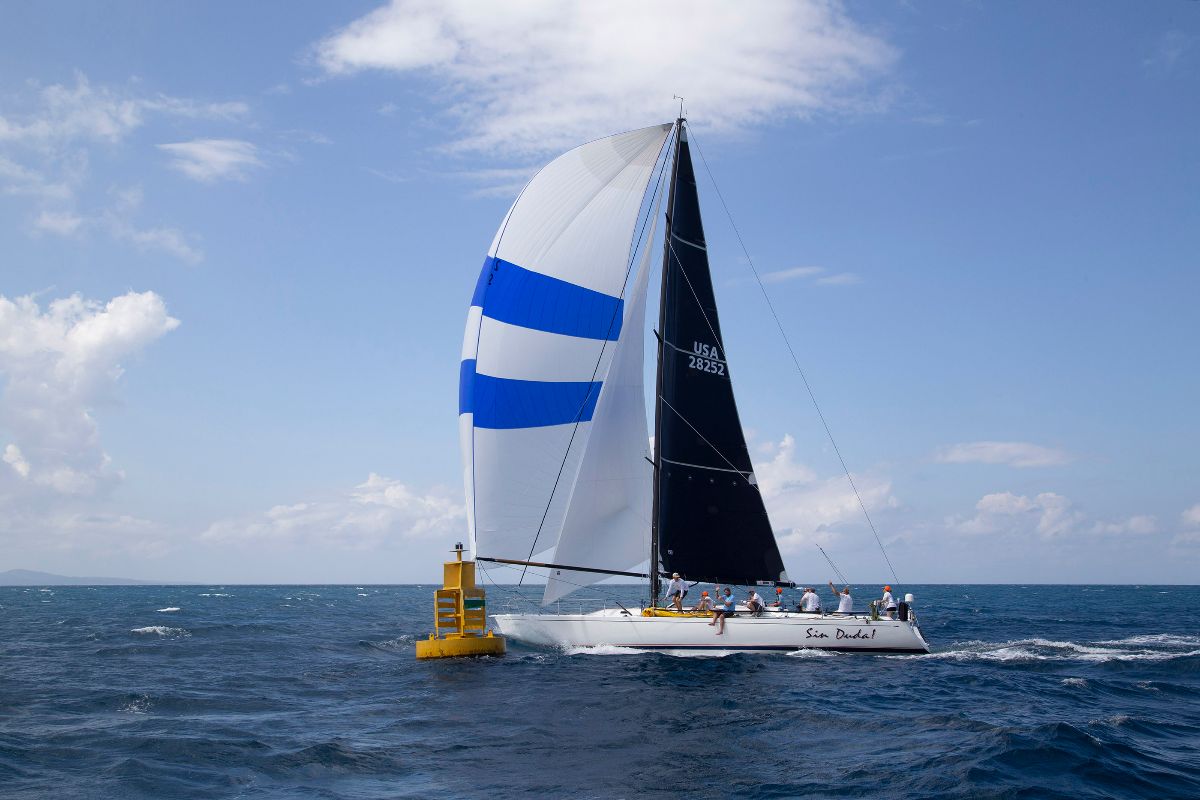 Two hours 20 minutes and 58 seconds later, the second Santa Cruz 52, Renegade, finished just off the Montego Bay airport. The remainder of the PHRF fleet arrived throughout the day with less than eight and a half hours separating the first team from the last.

Peter and David Askew's Volvo 70, Wizard, took line honors in the IRC fleet, when they crossed the line at 17:57:13, for an elapsed time of 3 days 3 hours 52 minutes and 13 seconds. The remaining IRC teams are still on the racecourse and expected in the early hours of Friday morning.

Lindsey Duda, owner/skipper of Sin Duda! was thrilled with their finish in what was the first time for the entire team and boat to compete in the Pineapple Cup. The team, who hail from Chicago and call the Chicago Yacht Club home, were especially pleased to be out of the polar vortex.

Duda said, “It was excellent; we saw a little bit of everything. We literally went through our entire sail inventory. We had a blast, it was challenging, it was very challenging; it wasn’t your typical trade winds race. There were a lot of navigational strategic decisions to be made, and I think we made a lot of them right, so we’re stoked to get line honors and be here.

“It was a really fun race, and the first time for everyone on the boat. For the first two days, everyone was like ‘this was not what we saw in the brochure’. It was cold and miserable, but once it cleared up and we went through the windward passage with great pressure and started ripping downwind, it was really fun. And then today the finish was a blast.”

This was Tom Slade and his Renegade's eighth Pineapple Cup, but the first where they had a sistership to race against. And although Renegade is set up for cruising, versus Sin Duda! being set up for racing, the Renegade crew pushed hard to keep in close contact with her rival.

“The fact that one of our sisterships was racing with us made us happy. We were glad that they were out there with us and wanted them to do really well. They’re a race boat and we’re just a cruising boat, so we just did our work, and we were surprised we did so well,” Slade said.

Starting 28 hours after the PHRF fleet, Wizard was first across the line in the IRC class, shortly before 6pm on Thursday. Although the team spent a lengthy amount of time in a wind hole, the Askews crew, made up multiple Volvo Ocean Race sailors, was still pleased with the performance.

Tactician, Charlie Enright said, “We enjoyed some champagne sailing with bohemian tactical challenges. We felt like we lost a day of our life, like 24 hours of basically being parked up in a transition zone. But, it was an unbelievable start and great finish.

“The post frontal bombing across the Gulf Stream at 24 knots – where we kept pace with Argo for at least two seconds – was great, and then we had some awesome sailing through the Windward Passage.

Enright added: “We did the race in 2017 and came back for good reason. You can’t always pick the forecast, but we still had a good race and good time with a good group. The hospitality when you get here is absolutely amazing, and sailing down the Windward Passage is really sick.”