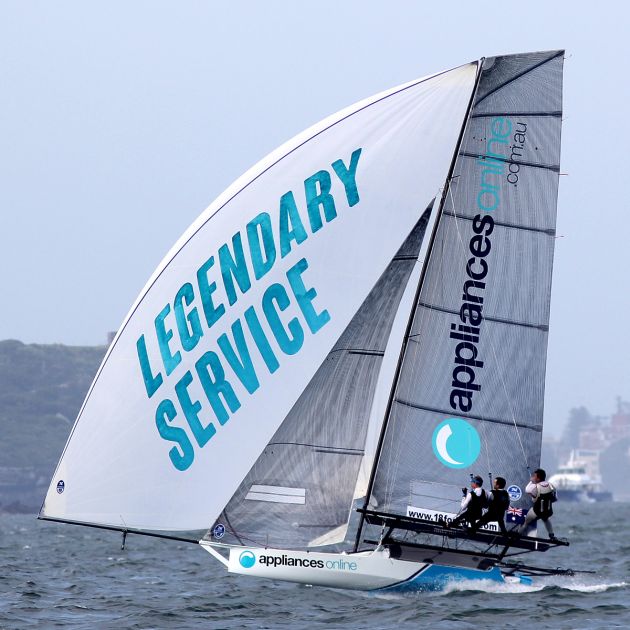 After a lengthy delay to the start, Race 2 of the 2016 JJ Giltinan 18ft Skiff Championship on Sydney Harbour today provided spectators with some great action and a wonderful exhibition of heavy weather sailing by the winning crew on Appliancesonline.com.au.

David Witt, Tom Clout and Tom Anderson are renowned for their ability in strong winds and with 20+knots and big rigs aloft the team showed why they have that tag.

While the appliancesonline team were brilliant, they had a lot of trouble trying to shake off the challenge of the Smeg team (Lee Knapton, Ricky Bridge, Mike McKensey), who stayed in the challenge until the very end.

Today’s results have tightened up the points at the top of the list and, pending two protests to be held on Tuesday morning, Thurlow Fisher Lawyers holds a one point lead. Thurlow Fisher Lawyers  has five points, followed by appliancesonline.com.au on six and Smeg on six. Defending champion Gotta Love It 7 (Seve Jarvin) was back in seventh place today after a rare capsize and holds fourth place overall on eight points. New Zealand’s C-Tech (Alex Vallings) is fifth on 12 points, along with Coopers 62-Rag & Famish Hotel.

When the race finally got under way today, the fleet split into two distinctive groups with Smeg leading the group on the eastern side of Shark Island while John Winning’s  Yandoo led the group on the west. Smeg and Yandoo were only secs. apart at the windward mark in Rose Bay.

Smeg’s team elected to two-sail reach with their big #1 rig while Yandoo’s team set a spinnaker. Applianceonline’s crew were also two-sail reaching but later went for the big spinnaker before Smeg followed suit. The move allowed Appliancesonline to grab a narrow lead, and despite a race long challenge by Smeg, were able to extend their lead with some hard charging action.

Winds of more than 20knots are way above the range of the big rigs and any team which managed to complete the course earned the appreciation of the large spectator fleet. Even previous JJ winners Seve Jarvin and John Winning couldn’t escape the elements and capsized in Rose Bay on the sixth leg of the course.

Race 3 of the 2016 JJ Giltinan Championship will be sailed on Tuesday (16 February). he club’s regular spectator fery will follow all three midweek races, leaving Double Bay Public Wharf, alongside the clubhouse, at 2.30pm. Anyone planning to follow the racing during the championship, on the spectator ferry, should make sure they don’t leave it too late to buy their ticket.

There is Livestream race coverage of every race on www.mysailing.com.au