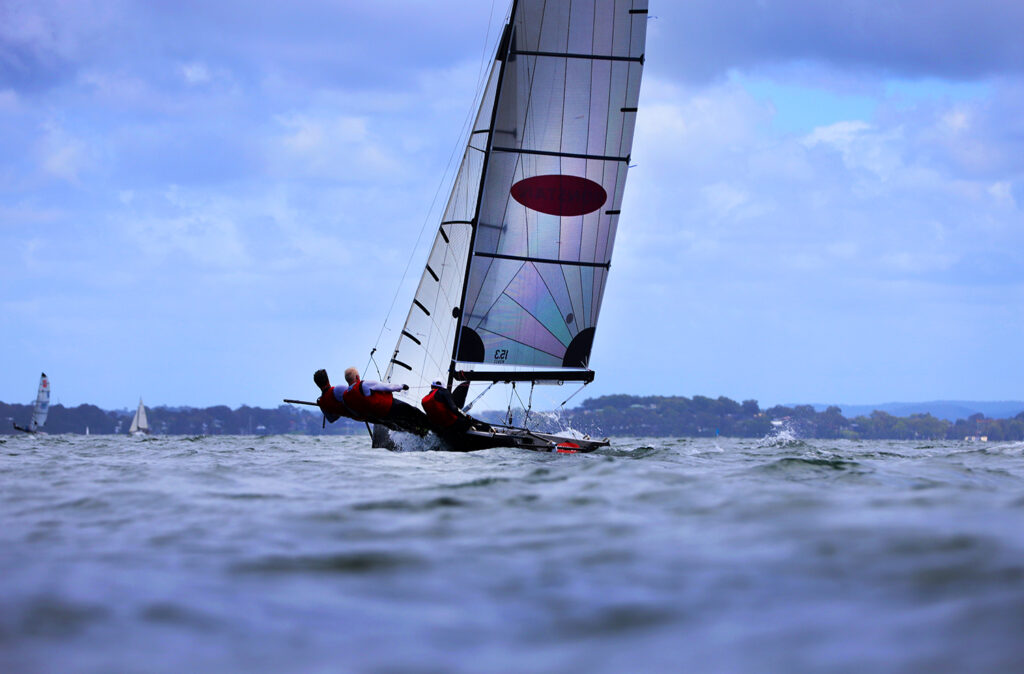 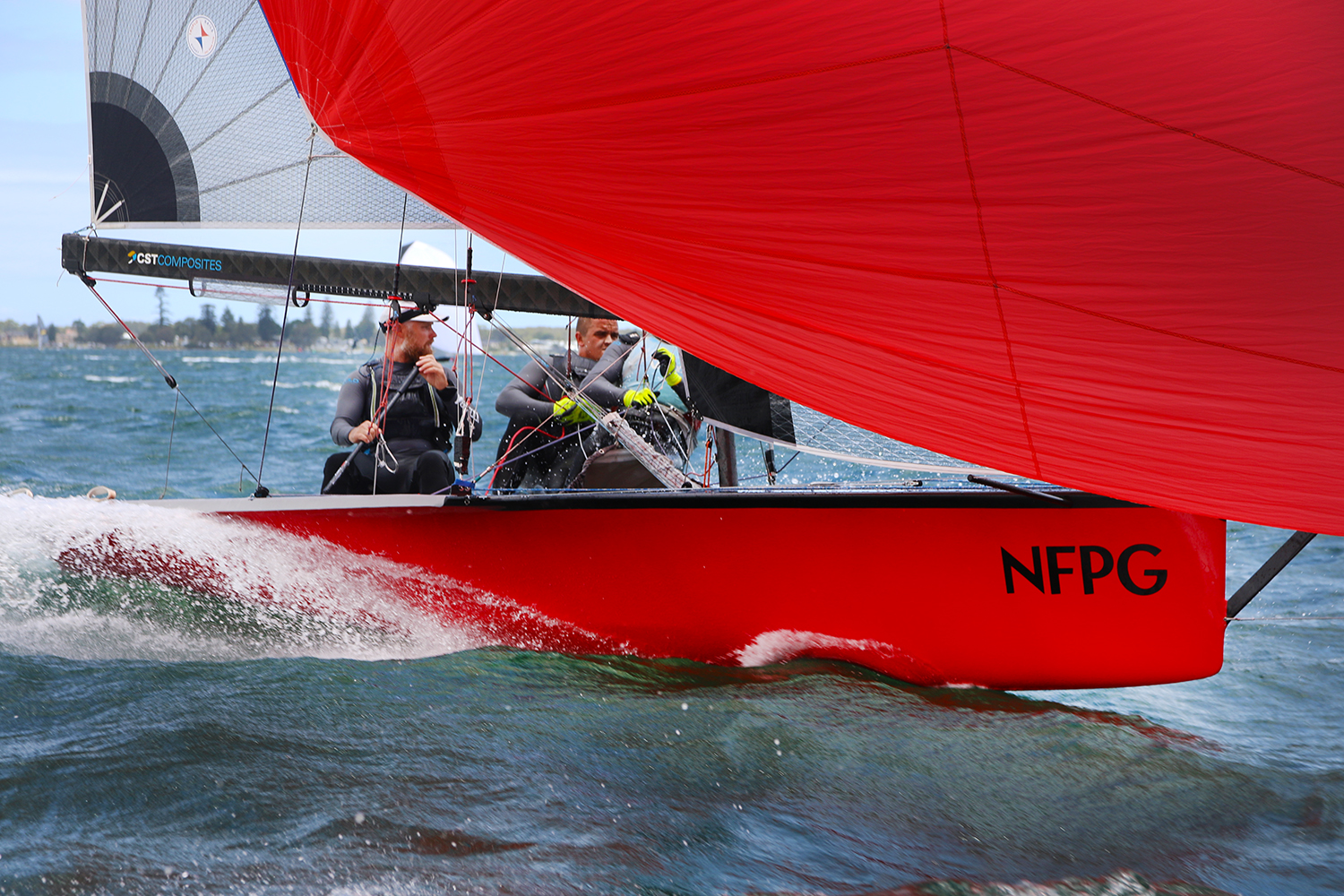 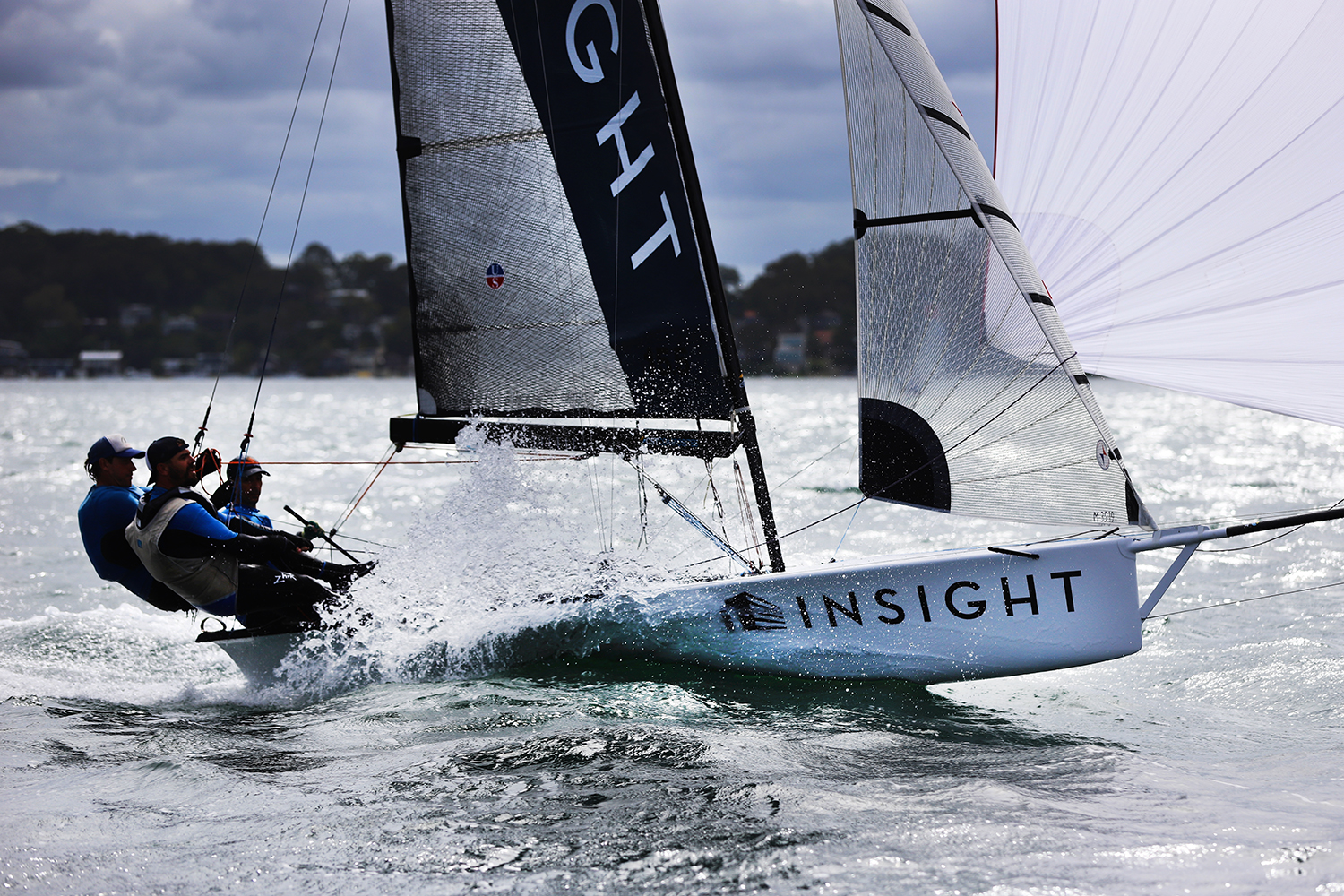 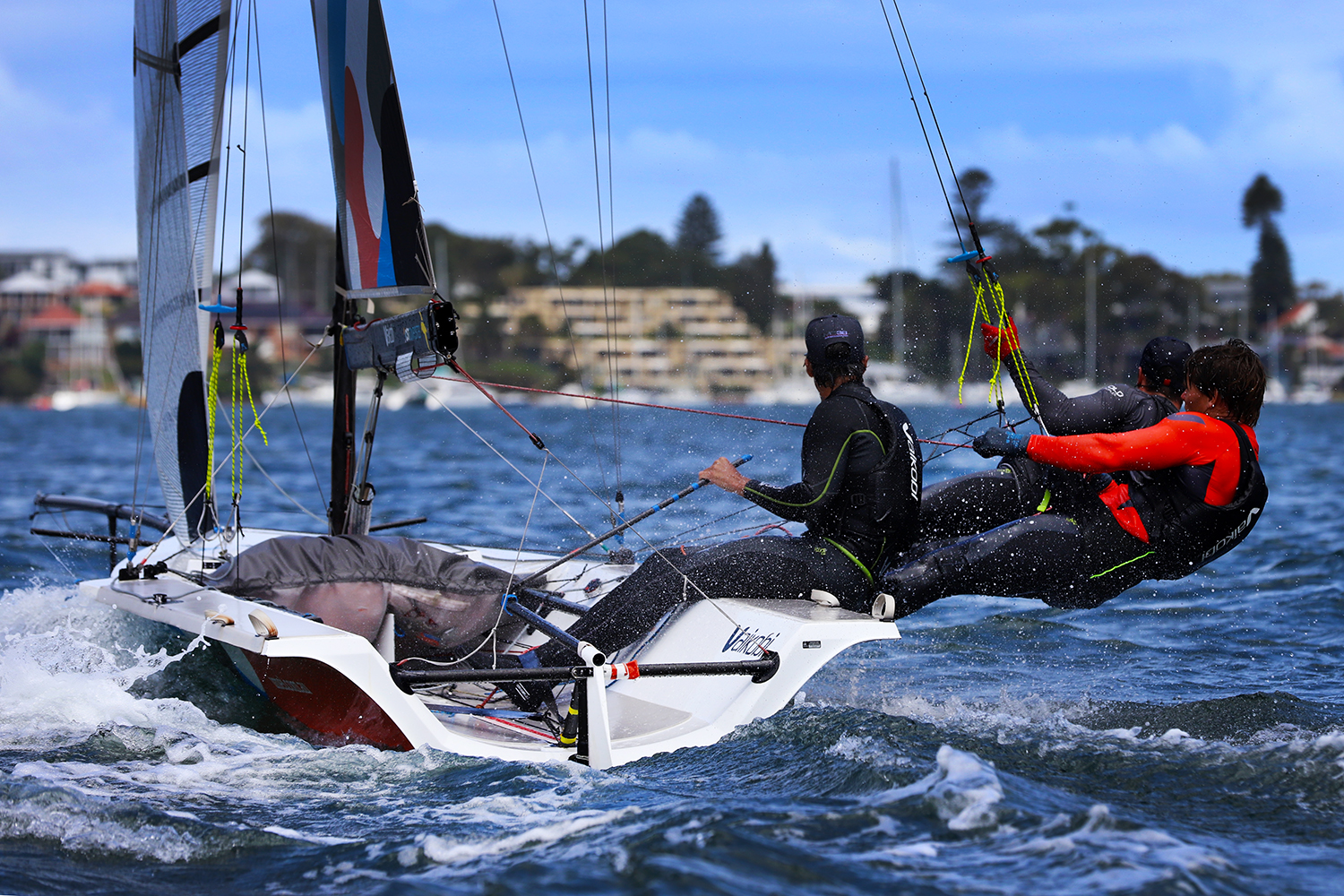 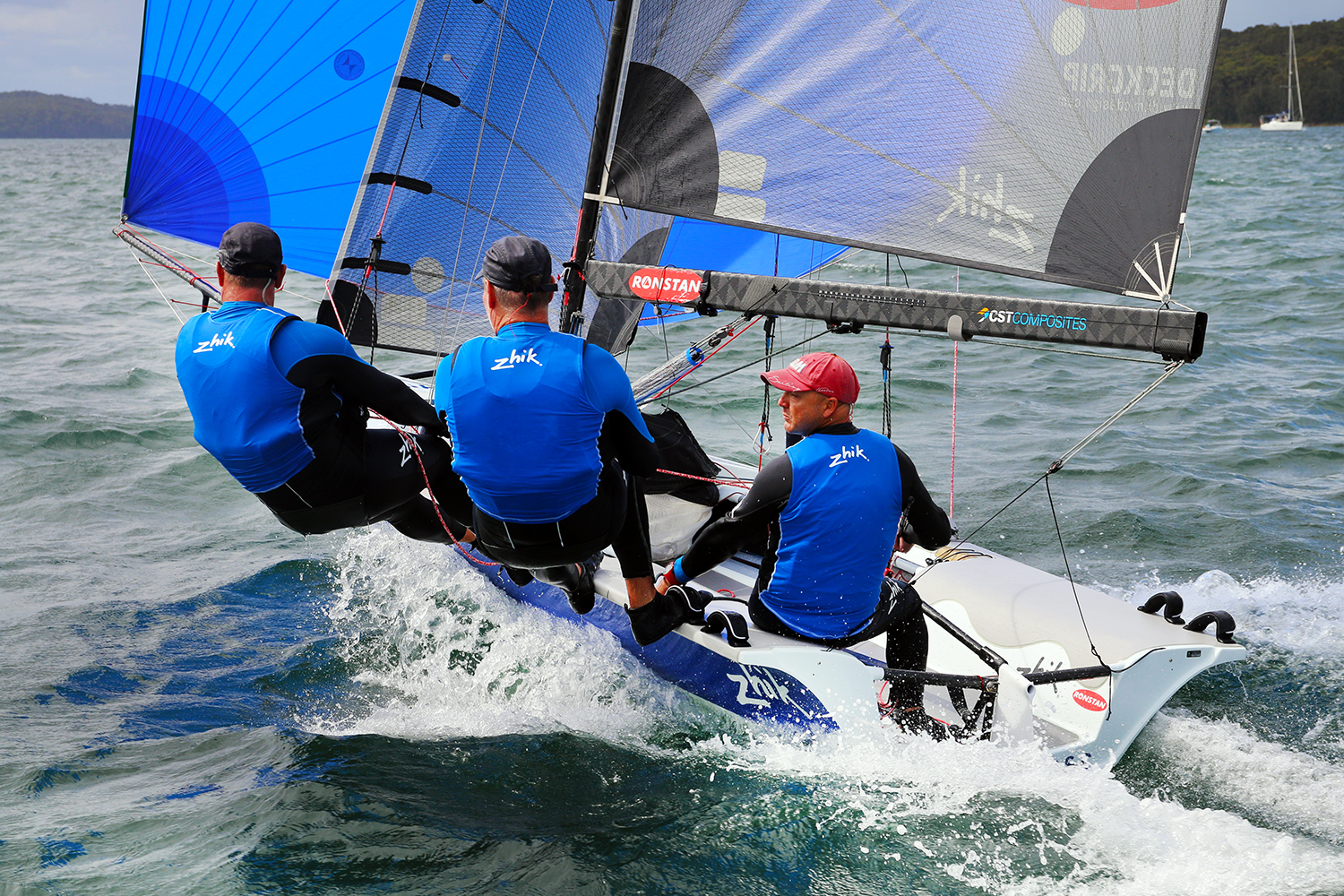 Belmont, Lake Macquarie: Today the sou’east breezes that fluctuate markedly in strength and direction separated the seasoned campaigners from their younger challengers, following Races 4 and 5 of the 21-22 Red Pumps 16ft Skiff Australian Championship.

The yellow jerseys have been handed to Nathan Wilmot, Brett Davis and Malcolm Page on the borrowed skiff Ronstan, while the venerable Lee Knapton, piloting Bryden’s Lawyers, sits handily in second place.

Clean starts are critical in a fleet of this calibre, with the first beat largely setting the script for the race, which is where wise heads usually prevail. Ronstan is yet to win a race but is consistently in the top four. Bryden’s has also largely flown under the radar, dropping a 12th placing in Race 3 to sit three points adrift.

Lurking in third overall is the Olympic/SailGP crew on Fluid, and overnight leader Domino’s dropped back to fourth.

In Race 4 it was Ronstan first at the top mark from Lancelin and IMEI, with SKE Electrical and Fluid in the mix. Belmont boats NFPG and Insight then seized a right-hand shift to be first and second at the next mark. With Ronstan breathing down their neck as well, NFPG capsized just a few boat lengths from the finish.

It was painful to watch, let alone be part of, and it opened the door for a narrow win by Insight.

“Heartbreaking really,” said NFPG skipper Ben Bruniges. “We just had to stay in front on the run to the finish but we didn’t pull off the last gybe because I fell over and that was the end of it.

“Still, we have a layday tomorrow and we’ll come back refreshed for the rest of the series.”

Race 5 saw a two-boat battle between IMEI and Brydens at the front, while Belmont’s East Coast Marine flew home for third.

“It was pretty fun racing today,” he said. “There were around 10 boats that were pushing for the front of the fleet. I’m not totally comfortable in the boat yet so there’s a few mistakes on my end, but I’m enjoying it a lot.”

Wilmot says the key for the Ronstan crew is keeping everything simple and consistent.

“This was only our sixth race sailing together as a team so whatever happens, happens. I think we’re also winning the Masters, so that’s always a good thing for us old blokes,” he joked.

“It’s great having the team back together too. My cousin gave us his boat for the regatta and it has worked out well. Malcolm knows when to tell me to shut up and Brett is just as solid as a rock.

“There’s a lot that can happen yet, with big breezes to come, but I love sailing these boats in those conditions.”

Knapton is remaining cagey about his chances of securing another national title in a class he’s competed in since 1997.

“It’s early days but we’re just laying low and hopefully can come in at the end and give it a good shot,” he said. “The boat’s good, it’s just us old fellas trying to get it around.

“We’re trying to stay top 10 but it’s hard to do that consistently in this regatta. We’re just going out to have fun – if we get a result, it’s a bonus.”

In the award for female skippers, Bethany Sherry on Konami is tied with Georgia Steenson aboard Bella Group, just ahead of Jessica Iles on Capital Brewing. The 13ft Skiff Cheeky, sailed by Max Downey and Thomas Mountstephens, is yet to be beaten in the national titles, while Angus Stewart and Hugo Kemp aboard #9, were again runners-up in both races.