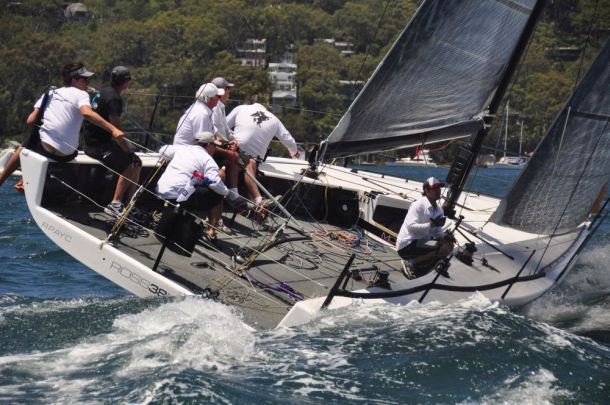 MC38 crews were rugged up as Sydney’s clear skies and south westerly winds added a wintry chill to the Winter Regatta raced off Middle Head.

So far this season the waves from the Manly Ferry on the Sydney Harbour racetrack is about the only swell the one design fleet has faced, making the legendary lumpy ocean in the Sydney Heads vicinity a new phenomenon for a number of skippers.

The rain cleared overnight paving the way for a clear, cold day with 10 knot westerlies for the opening race building to 18 out of the south west, and then things got funky though the breeze stayed above 10 knots for the rest of the afternoon. Crews were delighted with the race management provided by Middle Harbour Yacht Club, the first time the class has sailed from The Spit.

Boat of the day and clubhouse leader by three points, John Bacon’s Dark Star, came out strong, the usual Pittwater crew from the Royal Prince Alfred Yacht Club sailing a slick 1,2,1  set of results before a mistake in race four made them pay, such is the way in this tight fleet. “We sailed really well today then made one error and we couldn’t get it back,” Bacon said.

Second overall is Howard Spencer’s Menace flying the burgee of the Royal Akarana Yacht Club in Auckland, New Zealand. On equal 11 points with the Kiwis is Ross Hennessy’s Ghost Rider (RPAYC), the first time Hennessy has featured in the top three this season.

As he took his aching body home for a hot shower Hennessy said, “There wasn’t much in it today. I was surprised we went as well as we did in the waves, it was pretty bumpy and I’ve only ever steered in flat water.” Hennessy is switching crew around trying to build the nucleus of a steady team and today he was pleased that newcomers to the Ghost Rider program, Chris Williams on mainsheet and Tom Braidwood on the bow, combined so well with tactician Ben Lamb.

“Tommy ‘the little Colonel’ was trying to whip everyone into shape. He brings organisation to the boat, which allows Ben to do his job. Ben called some good starts and some good shots. We’ve got to get the boat faster downwind; I’m getting a new sail wardrobe from Doyles in July that may make a difference,” Hennessy added.

He’s married to a New Zealander and added “you can’t have Kiwi power all the time. I’ll just have to beat Howard tomorrow. It will be interesting to see the changing fortunes on a lighter day.”

Clare Crawford’s first helming foray was a huge buzz and Assassin was right amongst the action. “It was great fun and everyone was together. It was our first encounter with swell and it was quite lumpy. I am excited about tomorrow… I am better steering in light air,” Crawford said.

Normally on the bow which is a very physical role, she found helming less strenuous and a lot colder. The management change also brought a few more laughs than normal to the outing she confessed, referring to the regular more serious skipper of Assassin Robin Crawford, her dad, who wasn’t able to drive this weekend.

Chief umpire Richard Slater added, “everyone had a go today. All boats had a turn leading and then a turn at the back. Clare sailed really well.”

Class President John Bacon thanked MHYC’s on-water team and the RPAYC volunteers who drove down from Pittwater to assist.

Tomorrow’s forecast is for south-westerly winds 10-15 knots becoming variable below 10 knots in the early afternoon. The warning signal for the first of three remaining races is due to sound at 1100hrs.