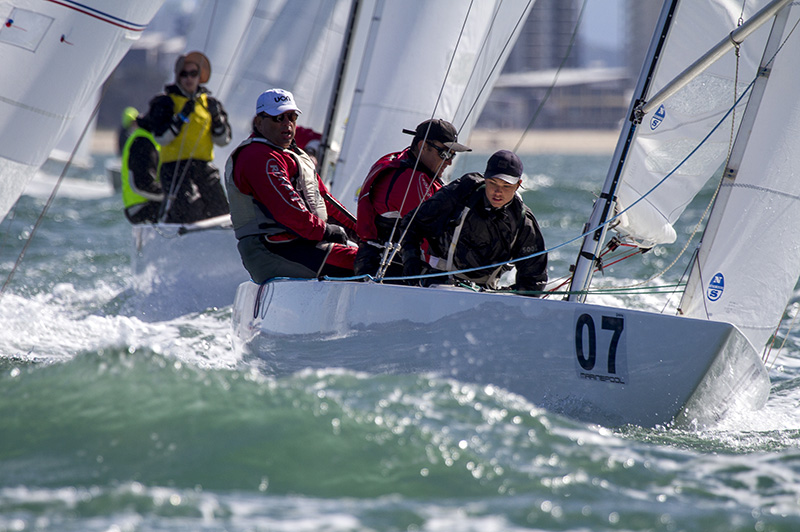 Mooloolaba Etchells Australasians organising committee chair Trevor Martin will be back on the water in this year's 20th anniversary regatta. Photo Teri Dodds.

Where Else But Queensland is the call out to Etchells sailors to come north to enjoy the excitement of great winter racing right through from April to October 2016.

The season starts on April 30 with the first of the Brisbane Fleet’s championship regattas. Then the biggest event of the season, the 20th anniversary of the Etchells Australasians conducted by Mooloolaba Yacht Club, is on from June 9 to 12.

Chair of the Australasian’s organising committee and skipper of Just 2 Funny, Trevor Martin, will “absolutely” be on the water for all the winter racing excitement including for his home event, the Mooloolaba Australasians, which he believes will attract a fleet of 50 plus boats.

“With this being the 20th year, I think the entry numbers will be very strong. It’s great that the Mooloolaba event sits near the start of the Queensland winter racing program which will go on, month by month, until the state titles in October. It’s going to be phenomenal. Where else would you rather go sailing than in Queensland in winter, especially in Mooloolaba,” Martin said.

Southern sailors are already talking up Queensland winter racing. Royal Brighton Yacht Club’s Peter Coleman has his plans in place to return to Mooloolaba after missing the regatta for the last few years and at least three Royal Geelong Yacht Club teams are getting themselves organised to travel to Mooloolaba. And that is just the start.

“I would love to see here Mornington’s GT (Graeme Taylor), our latest national champion. He could still equal two-time winner Chewie (Matt Chew). Plus GT crewed when they won it with Wharro (Grant Wharington),” Martin challenged. Taylor won the Australasians in 2008.

“It would be interesting to see if John Bertrand can get here due to his Olympic commitments with Swimming Australia. That would be the icing on the cake for our 20th year,“ Martin added.

The Notice of Race for the 20th Etchells Australasians is on www.moolooletchells.com. The online entry system will be activated within the month.

Following on from the Australasians, Royal Queensland Yacht Squadron’s Brisbane Fleet championships continue on July 16 and 17, August 27 and 28 before the Queensland Etchells Championship are held by RQYS from October 1 to 3.