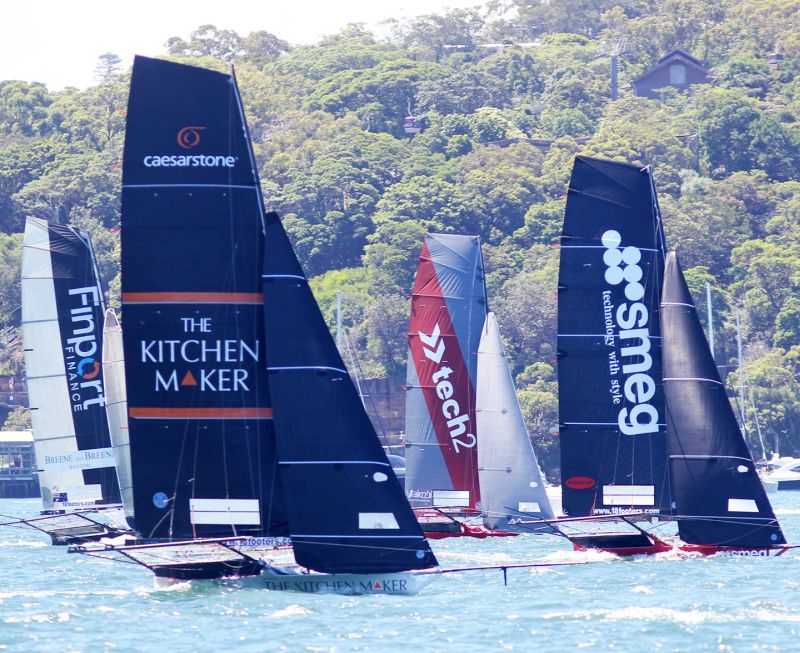 11/01/2021
Racing resumed today, after the annual break over the Christmas-New Year period, when the Australian 18 Footers League conducted race 5 of the 2020-2021 NSW 18ft Skiff Championship on Sydney Harbour.
Defending champion Winning Group team of John Winning Jr., Seve Jarvin and Sam Newton won the start and were never headed over the entire North-East course before going on to record a comfortable 1m36s victory over the Smeg team of Michael Coxon, Ricky Bridge and Trent Barnabas. The Oak Double Bay-4 Pines (Aron Everett, Courtney Mahar, Charlie Gundy) was a further 21s back in third place, ahead of a dramatic finish in which Yandoo (John Winning) crossed the finish line just 1s ahead of Nick Daly's Bird and Bear.
Series leader going into today's Race 5, tech2 was involved in an incident with Smeg as the two skiffs approached the top mark on the first leg of the course.  The collision resulted in tech2 being forced out of the race with a broken wing.  The tech2 team has lodged a protest seeking redress.
Subject to the decision over tech2's protest, provisional points going into next Sunday's final race of the 2020-2021 NSW Championship are Winning Group on four points, followed by tech2 (Jack Macaartney) on seven, Smeg on nine points, The Oak Double Bay-4 Pines and Finport Finance (Keagan York) equal on 11 points, Andoo (Marcus Ashley-Jones) on 13 and Yandoo on 14.
Today's race was sailed in a 10-15 knot North East wind with most of the fleet electing to sail with their No1 (big) rigs.  A notable exception was Shaw and Partners Financial Services (Jim Colley) which raced with the smaller No. 2 rig.
While Winning Group was a clear leader on the first leg of the course to the windward mark at the Beashel Buoy, the race for second place was intense between Smeg, The Oak Double Bay, tech2, Finport Finance and The Kitchen Maker-Caesarstone (Jordan Girdis).
Then late on the leg, the rookie Birkenhead Point Marina team (Tim Westwood) made a strong challenge on the RHS of the course and grabbed second place , 20s behind Winning Group, as spinnakers were set for the run to the wing mark off the southern end of Shark Island.
Bird and Bear also improved her position and was in third place, ahead of The Oak Double Bay, Yandoo, Andoo and Finport Finance.
The Bird and Bear team continued to show good speed downwind and moved into second place while reducing Winning Group's lead as the pair began to race with little between them on the next spinnaker run between Shark Island and the bottom mark off Clark Island.
The race behind the two leading skiffs was just as intense and there was little between the top seven skiffs at the bottom mark.
Winning Group was followed closely by Bird and Bear, The Oak Double Bay, Yandoo, Andoo, Smeg, which had made a great recovery after the earlier incident with tech2, and Birkenhead Point Marina.
The smooth teamwork of the Winning Group crew was evident again over the next windward leg and the following down-the-middle-of-the-harbour spinnaker run back to the bottom mark off Clark Island.
Winning Group's narrow lead over the first lap of the course was now out beyond one minute and there was nothing behind the defending champion team to suggest anything but a victory.
While Winning Group continued to extend her lead out to two minutes at the final windward mark, the race behind was exciting as there was little between the next six skiffs.
The re-sail of Race 2 of the NSW Championship, in conjunction with Race 1 of the Australian Championship, will be conducted next Sunday (January 17).
Spectators can follow the racing on board the club's spectator ferry, however due to the COVID-19 policy, numbers are limited.  Booking online through the club's website www.18footers.com is essential. https://www.18footers.com.au/18-footers-sailing/spectator-ferry/
For those unable to make it out onto the water, the club's live broadcast team will be on Sydney Harbour to capture all the action.  Live streaming is available at www.18footers.com by clicking on the '18 Footers TV' link.
– Frank Quealey, Australian 18 Footers League Ltd.