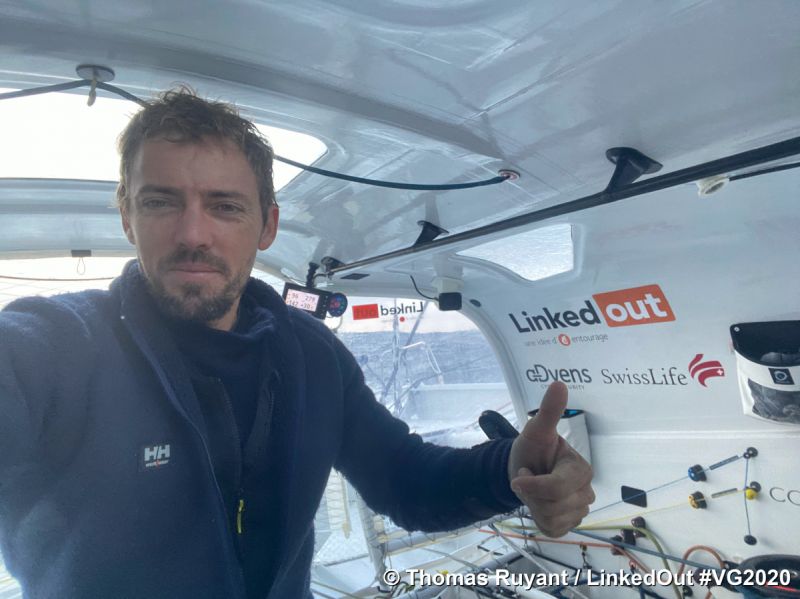 All bets are off - open season for the Vendee Globe podium

All bets are off. Normally by the 64th day of recent editions of the Vendée Globe, the solo, non-stop race around the world has been distilled down to a choice of two or at the outside three potential winners.

But as the group of six chasing solo racers is now compressed to within 300 miles of leader Yannick Bestaven, and the skipper of Maître Coq IV has seen his lead of 435 miles melt like snow in the Brazilian sun, to be just 38 miles ahead of Charlie Dalin (Apivia) this afternoon, it is clear any one of the top six or seven boats could hope to break the Les Sables d’Olonne finish line first later this month, probably around the 28th or 29th. Indeed by tomorrow Tuesday there seems every chance that the leader for 17 days might have been passed.

The semi-permanent cold front which extends from the Brazilian coast, somewhere between Itajai and Rio, out to sea South east by eastwards for some 1500 miles, largely set the hierarchy on the descent of the Atlantic back in the third week of November – remember Thomas Ruyant and Charlie Dalin trading gybes downwind less than ten miles apart.

Now on the climb back to the easterly tradewinds, the same weather feature blocks the fleet. And while Bestaven has lost most by being west, closest to land, the gain is increasingly in the east as the lead group climbs towards the tradewinds. And so not only have Dalin and Thomas Ruyant come back at Bestaven hard, but so too in the east are Damien Seguin, Louis Burton and Boris Herrmann all back in contention.

“I think for Yannick, who sees us coming back to him when he was way ahead, it must be tough. For us it is very gratifying. I wasted a lot of time with some minor issues, but I'll be able to pick back up. The whole Vendée Globe has been like this, the race is far from over,” contends Thomas Ruyant, the LinkedOut skipper on the morning call to Race HQ in Les Sables d’Olonne. Ruyant has just climbed his mast for the fifth time, this time to repair his wind indicator after racing three days blind with no precise wind data. And now the skipper from Dunkirk in the north of France is back on the attack.

So too is fifth placed Louis Burton highly motivated by the competition. “I look at the positions of others, to find out how to get closer to them. I have never known this excitement and pleasure racing so close. I count the miles that separate me from Thomas Ruyant and Damien Seguin and examine their courses. It's exceptional,” says the skipper from Saint Malo on Bureau Vallée 2.

And Boris Herrmann, in sixth position, remarked on the French show today, “How fantastic for the race to be this close during the climb back up the Atlantic, it really is all to play for, for all of us, even Yannick, you know he’s not miles and miles ahead as I can see from my screen, so the regatta is very much still alive, and each to our own to play the match. In the past, we’ve seen climbs up the Atlantic which have been less exciting, perhaps one or two boats clearly ahead, but here we have a real host of different boats which could make the podium places, four, five or six boats, with no doubt surprises still to come!”

Bestaven always has 10hrs 15minutes in his pocket – the redress granted for his role in the rescue of Kevin Escoffier and so Boris Herrmann (Seaexplorer-Yacht Club de Monaco) has six hours.

And more and more as the prospect of a close, compact regrouping happening there is the issue of who has what, and what potential the skippers and their boats really have. And so the mind games start on the daily media calls. No one wants to admit to their weaknesses, except for Apivia and LinkedOut who have their problems with their port foils. But there is sail damage, hook damage, and other issues which now become even more closely guarded secrets. The stock answer? “I am at 100% and so is my boat!”

Out of the grey and into the technicolour real world

Celebratory Arcachon brewed beer in hand, Arnaud Boissières crossed his fourth consecutive Vendée Globe Cape Horn at 1135hrs UTC at the start of the French live show today. The adopted son of the town of Sables d'Olonne looked exhausted but elated after a harsh Pacific Ocean.

Another 1hr and 30 minutes later it was the heavily bearded, exuberant Swiss skipper Alan Roura at 1301hrs UTC and then there was the release from the Pacific for Jérémie Beyou at 1534hrs UTC. The skipper of Charal has the honour of being the fastest in the fleet between Cape of Good Hope and Cape Horn, at 30 days 14hrs 27 minutes some 45 minutes quicker than Armel Tripon (L’Occitaine en Provence). Britain’s Pip Hare should bring Medallia round for her first Cape Horn tonight.