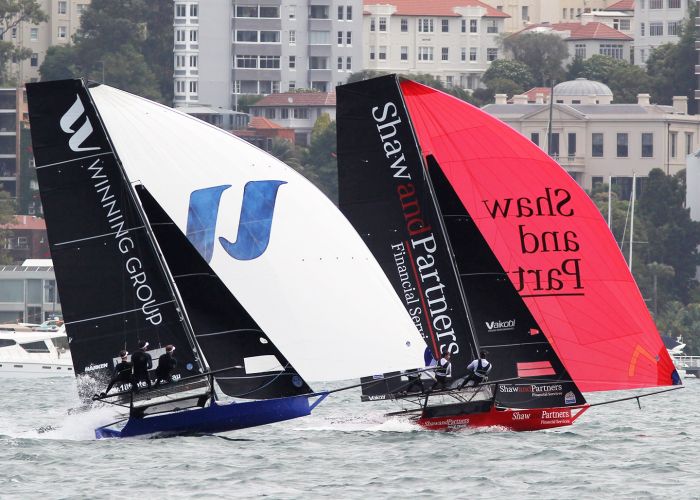 Winning Group gains the upper hand over Shaw and Partners Financial Services with her smaller rig on the tight run. Photo 18 Footers League.

After two outstanding wins in the first two races of the NSW 18ft Skiff Championship, Winning Group went into today's Race 4 on Sydney Harbour as a hot favourite to extend her lead in the championship and didn't disappoint her supporters when the team brought the skiff home a clear winner in the 15-knot ENE breeze.

Winning Group continued her outstanding performances in the championship when John Winning Jr, Seve Jarvin and Sam Newton cleared out from the rest of the fleet over the final lap of the three-lap Easterly course to win by 2m1s from Yandoo, sailed by John Winning, Matt Coutts and Mike Kennedy.

Winning Group now leads the championship pointscore table with a perfect score of three points, followed by Shaw and Partners Financial Services of 10, The Oak Double Bay-4 Pines and appliancesonline.com.au on 12, Rag & Famish Hotel on 18. Yandoo and Smeg are then equal next on 20 points.

While John (Herman) Winning Jr's Winning Group team led shortly after the start, it was his father's Yandoo team which won the day on the windward leg from the start to the windward mark in Rose Bay, where Yandoo led by 25s from Smeg, The Oak, The Kitchen Maker-Caesarstone (Jordan Girdis), Noakes Blue (Yvette Heritage), Winning Group, tech2 (Jack Macartney) and appliancesonline.com.au.

Once the fleet cleared the wing mark off Clark Island the teams had a battle on the 'tight' run to Kurraba Point, where Yandoo still held the lead.

Appliancesonline elected to use just a main and jib on the run and moved up from eighth to third as the fleet set off for the long windward leg back to the Rose Bay mark.

The split in the thinking of the fleet now became critical as the smaller rigs on Yandoo and Winning Group dominated the leg. Yandoo was still in front, only by 5s from Winning Group, but the pair had stretched the margin over the rest of the fleet. Smeg was in third place, but now trailed the leaders by 40s.

From that point the race became a battle of father and son as the two teams fought for the lead.

Over the final lap of the course, the experienced Winning Group proved too strong and led by the winning margin as she headed for home on the short spinnaker run between Shark and Clark Islands.

Next week the Australian 18 Footers League will conduct races on Friday evening as well as Race 4 of the NSW Championship next Sunday. There will be a spectator ferry following both events and AeroMedia Live Broadcast team will be there on each day to catch all the live action.