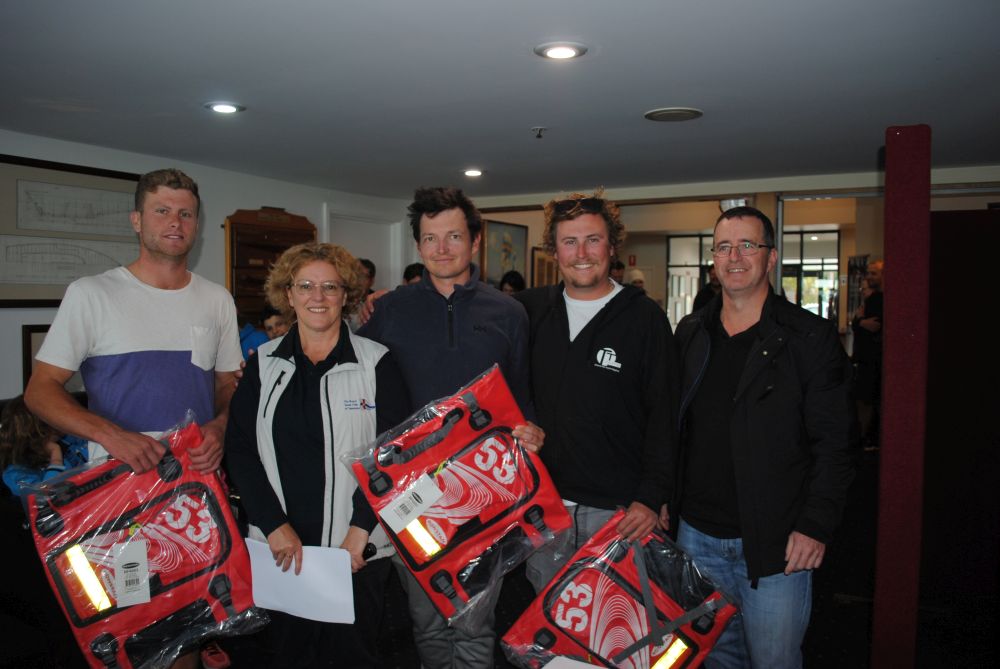 Winning crew of SB20 Smigger at the BMW Showdown prizegiving

Sunday was a winning day in Tasmania for Huon Valley orchardist and sailor Andrew Smith – he organised the raising of more than $15,000 as drought relief for farmers and his boat Smigger won the SB20 sports boat class at the BMW Showdown.

Smith took the day off sailing to run the fund raiser at Willie Smith’s Apple Shed, his family’s wellknown cider-oriented restaurant at Grove, describing it as “a great success for a worthy cause.”

On the River Derwent, Sydney-based champion international sailor David Chapman took over the helm of Smigger for Showdown and, with a crack crew of Sam Tiedemann and Lewis Noye, won four of the five races at the weather-curtailed regatta.

The opportunity to helm Smigger was a bonus for Chapman, giving him a taste of springtime sailing conditions on Hobart’s River Derwent leading up to the SB20 Nationals to be sailed here at the end of the month.

For the Nationals, Chapman and Tiedemann will then join prominent local owner Michael Cooper in racing Export Roo.

With the weather moderating after Friday and Saturday’s gales, the RYCT race officers showed their skills in completing five races for the SB20 and Dragon one-design keelboats and six for all the off-the-beach classes.

Racing on Sunday began in a 16 knot nor’wester, gusting to 25 knots in the morning which eased to under 10 knots from the WNW this afternoon.

In the SB20s, Smigger scored four wins and a second to finish with six points, 10 points clear of Black (Richard Fader) with Porco Rosso (Elliott) a close third.

Former Dragon World champion Nick Rogers almost made a clean sweep of the Dragons, steering Karabos XI to four straight wins before being disqualified in race five for a start line (UFD) infringement.

Rogers has moved from the SB20s back to Dragons to contest the Prince Philip Cup and the International Dragon World Championship off Fremantle, WA, in January. It was here that he won the Dragons Worlds in 1995.

The off-the-beach classes each sailed six races, with the BMW Showdown highlighting the talent among young Tasmanian sailors, significantly in the 29er, Cadet, Optimist and Laser classes, all of which will be holding their national championships on the Derwent in early January.

The 29ers, Cadet and Optimist nationals will sail on the Derwent, the Laser divisions on Bass Strait off Devonport, with the younger Radial and 4.7 sailors then heading south for the prestigious Australian Sailing Youth Championships on the Derwent in mid January.

In the 29ers, William Wallis and Fynn Sprott sailed Westward to four wins, a second and a third to finish two points ahead of fellow Sandy Bay Sailing Club members Oscar O’Donoughue and Rupert Hamilton in HH. Third place went to The Smiling Assasins, sailed by Alice Buchanan and Rohan Langford.

Another Sandy Bay Sailing Club crew, Archer Ibbott and Sammy Hooper, sailing Little Devil, scored five wins and a second in the Cadets. Ibbott, who was a member of the Australian team at the Cadet Worlds earlier this year, finished nine points clear of Godscend (William Zeeman and Abi Wilcox) with Meltimi (Lawrence Jeffs and Harry Gregory) a close third.

RYCT members Max Gluskie and Ryan Moreton have graduated to the Laser big rigs and the two of them match raced in the Showdown. Gluskie, dominated, winning all six races.

In the Laser 4.7s, another young RYCT off-the-beach member, Finn Potter, scored an impressed four wins and a second to win from Sam Castle and Gabriel Yannarakis.

In the Optimist Green fleet Charlie Salmon had four wins and two seconds in a fleet reduced by the fresh breeze early in the day. Sam Castle placed second and Gabriel Yannarakis.

Daniel Maree was unbeaten in six races for the Sabot class, winning easily from Elysha Jones and Nick Whitton.

There were only two Flying 11s entered with Lara Recape winning four races and Oscar Pritchard the other two.