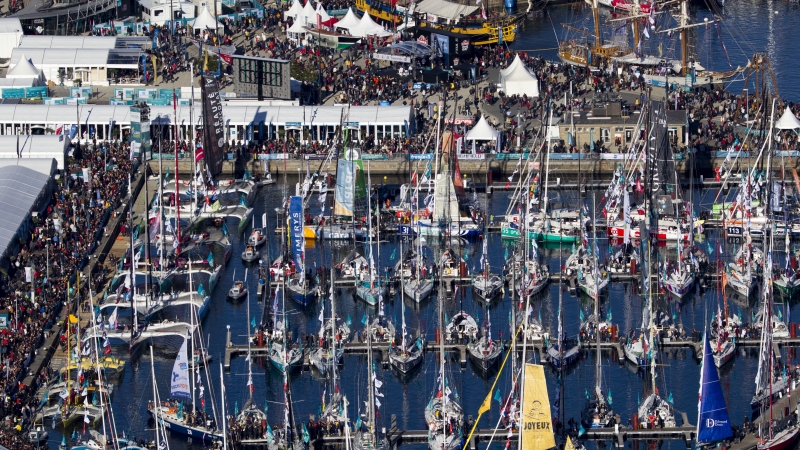 All is set in the Brittany port of Saint Malo for the start of the 11th edition of the Route-du Rhum-Destination Guadeloupe solo transatlantic race, which features a record entry of 123-skippers who will tackle very rough conditions in the early stages.

The 3,542-nautical mile race to Pointe-à-Pitre in Guadeloupe, which takes place every four years, is one of the top races in the professional solo ocean racing calendar and this 40th anniversary edition includes skippers in six classes from 11 countries with a total of 23 non-French sailors taking part.

The fleet is led by the six-strong ULTIME class of giant foiling trimarans looking to break the outright seven-day race record. It also includes a 20-strong division of IMOCA monohulls and an unprecedented participation by Class40 monohulls, with 53 entered.

The Route du Rhum-Destination Guadeloupe almost always features rough weather in the early stages as the skippers head out into the English Channel then cross the Bay of Biscay, as they look to sail south to hook into the Trade Winds that will take them to the Caribbean

This race looks to be no exception with weather predictions for excellent conditions at the start tomorrow – with 15-20 knots of breeze – but then the fleet will hit a big depression which blocks the way westwards on Tuesday. At that point the sailors will be dealing with winds of 35-40 knots but with dangerous gusts hitting up to 55 knots.

It is thought that some sailors will choose to take refuge in other French ports like La Rochelle or Roscoff – the rules allow them to do this without penalty – and then set off again once the worst of the weather has passed.
“For the start of the race we have good conditions with south, southeast winds of 15-20 knots,” said Race Director Jacques Caraes. “The difficulty afterwards is the big depression coming on Tuesday. It’s a huge system so we will do the start anyway but after that it will be very hard for boats from midday on Tuesday.

“This is normal for November,” he added, “very frequently at this time of year you have a front coming in. Of course the faster boats can try to avoid the system, but the smaller ones maybe have to have a different strategy. It is not a bad thing to seek shelter in another harbour if they need it and we will help them with that. The strategy to finish this race is to sail carefully in the really rough weather.”

French star Jeremie Beyou is one of the leading contenders in the IMOCA fleet in his brand new 60-footer, Charal. After just two months of sea trials this will be the first time this foiling monohull will have faced big winds and big seas.

“We have had no major problems since we launched the boat so I am not scared about it, but what I know is that when you are racing solo in 40 knots of wind you always have problems in any IMOCA – an old one or a new one – so I am concentrating on it and I will be very focused on not making mistakes. New boat or not, it is the same.”

British Class40 sailor Sam Goodchild from Falmouth, at the helm of the Netflix-sponsored Narcos Mexico, is looking forward to getting going after the busy build-up in Saint Malo that has seen over a million people tour the pontoons over the last 10 days.

“The last few days have been crazy,” said Goodchild who will be contending for the win in Class40s.

“We have had so many people coming to see the boat and say hello but now I am thinking about the race and getting stuck in. It’s going to be pretty violent in the first few days weather-wise, but if you want to do the Route du Rhum that’s what you’ve signed up for.”

Fellow Briton Samantha Davies, who is racing in the IMOCA fleet on board Initiatives Coeur, said: “I am nervous, yes, worried no. They are two different things. I think it is good to be worried.

‘We chose to be here. It will be fine as long as nothing goes wrong. You have to know when to lift your foot of the gas. To win you have to finish, so it’s a case of reducing sail early and making sure we don’t have any problems.”

French superstar François Gabart, who will sail the huge trimaran MACIF in the Ultime class, is ready for a six-day thrash to the Caribbean in his super-fast yacht now equipped with foils for the first time.

“Physically, you have to be able to push yourself to the limit – we will have to, we have no choice,” he said. “It will not be a pleasure, we will suffer, it will be brutally hard but I will get through it. That is the thing we all have in common – this sheer intensity over six or seven days – because it will be such a fast race. And I will be putting myself in the match from the start.”

The starting gun will be fired at 14.00hrs local time tomorrow (Sunday) when all 123 yachts will cross one of the longest segmented start lines ever set up in the history of sailing, at three nautical miles. A huge spectator fleet of craft, ranging from large passenger vessels to small motorboats and yachts, is expected to gather to watch the sailors as they head off into the Atlantic.

While records could be broken in most of the classes, Caraes says that past races show that there will also be a large number of retirements as boats suffer gear failure. In past editions, up to 30 percent of the starters have typically not made it to the finish.

“My main hope is that everybody is safe,” he said. “That is the most important thing. For race management it is essential for us to keep in contact with all the boats – that’s why we will run a watch system to monitor them 24 hours-a-day – and they can be in contact with us all the time.”

Caraes added that he is delighted by the support being shown for this race by the sailing public in France and around the world. “For us it is important to see all this enthusiasm around the race and the huge numbers of people everywhere. It is an incredible race, one of the most famous races, and the different classes have attracted thousands of people to the various marinas in the build-up – it has been a beautiful spectacle.

“We are also delighted with the participation of skippers from outside France. It is important to internationalise the race and we have more and more foreigners and that is a really good thing for us.”

The Route du Rhum-Destination Guadeloupe is owned and organised by OC Sport Pen Duick, a subsidiary of the French media conglomerate the Telegramme Group.