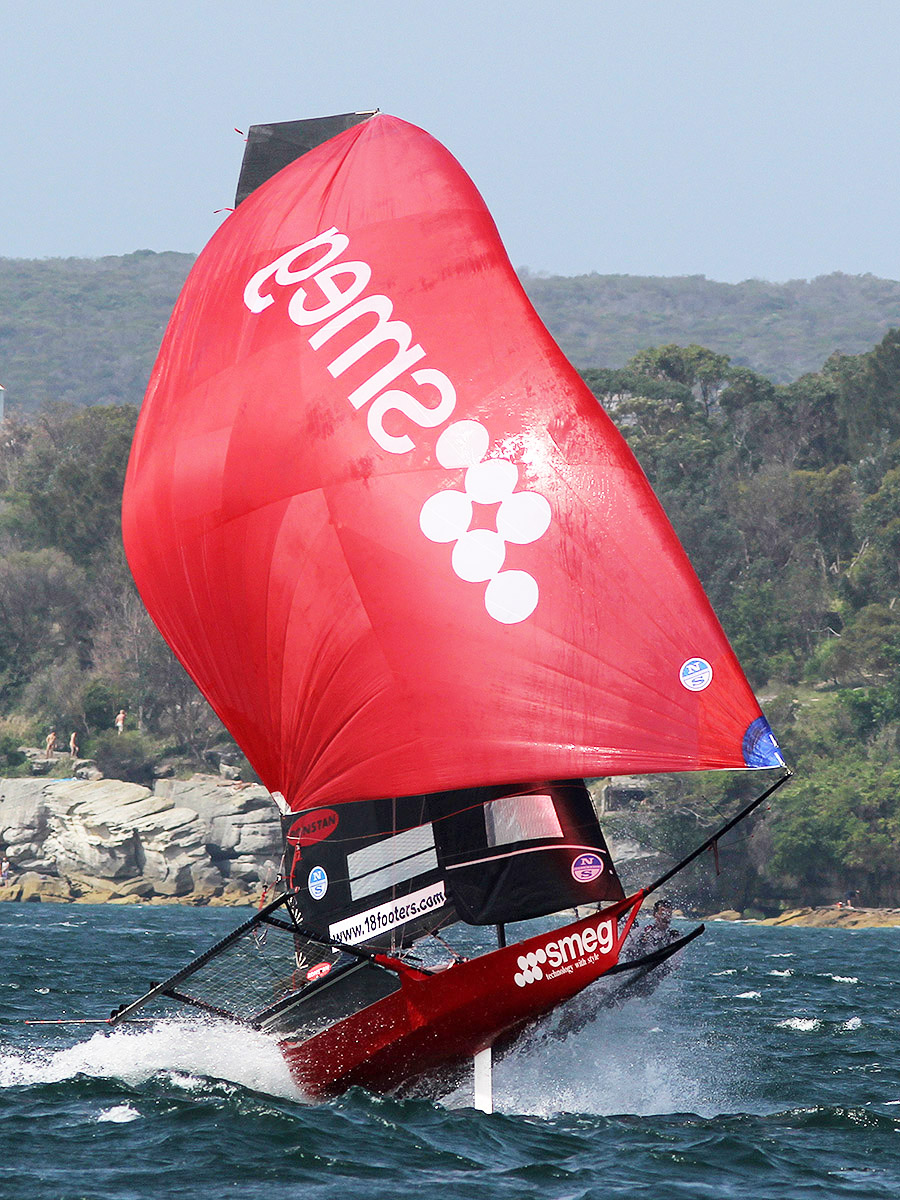 Smeg flies on her way to victory in Race 4 of the Spring Championship on Sydney Harbour. Photo Michael Chittenden/18 Footers League.

05/11/2018
The Smeg 18ft Skiff crew of Michael Coxon, Mike McKensey and Ricky Bridge were brilliant as they led the fleet from start-to-finish and dominated Race 4 of the Spring Championship on Sydney Harbour today.
The team won the start at the pin end of the line, and clearly led the fleet up the first windward leg from Clark Island to the Beashel Buoy in the 17-knot North East wind. Even allowing for the staggered 3-Buoys mark, Smeg maintained her lead as the fleet headed back down wind to the wing mark in Rose Bat.
With Smeg in control from early in the race, most interest for the large specttor fleet centred on the battle for second place, with six boats vying for the honour.
The Kitchen Maker-Caesarstone's Jordan Girdis, Lachlan Doyle and Tom Quigley finally won out to come home in second place, 1m41s behind the winner, and just 4s. ahead of the third placed Rag & Famish Hotel team of Bryce Edwards, Jacob Broom and Rory Cox. R Marine Pittwater (Rob Greenhalgh) finished fourth, ahead of Noakesailing (Sean Langman) and Vintec (Kirk Mitchell)
Rag & Famish Hotel's third placing in today's race was enough to give the young crew a nine points lead over Smeg in the seven-race championship. The Rag leads with a score of 9 points, followed by Smeg on 21, Bing Lee 21, Finport Finance 26, Yandoo 27, and Noakesailing 29.
With the wind at its strongest on the first lap of the course, the fleet gave spectators a spectacular look at speed sailing as the leaders raced downwind to the wing mark with only secs. separating the chasers behind Smeg.
At the end of the first lap, The Kitchen Laker-Caesarstone, Appliancesonline.com.au (Brett Van Munster), R Marine Pittwater, Rag & Famish Hotel, Vintec, Dal Zotto (Jack Sprague) and Yandoo (John Winning) were staging a great race behind the runaway leader.
Appliancesonline generally held second place over the next lap-and-a-half of the course and was a clear second behind Smeg as the leaders rounded the final windward 3-Buoys and headed for home. Just when the second place seemed assured at the final wing mark, Appliancesonline capsized and the team had to settle for a disappointing 10th as they limped home.
Races 5 and 6 of the Spring Championship will be sailed next Sunday.  The club's spectator ferry will follow all the racing action.
– Frank Quealey, 18 Footers League