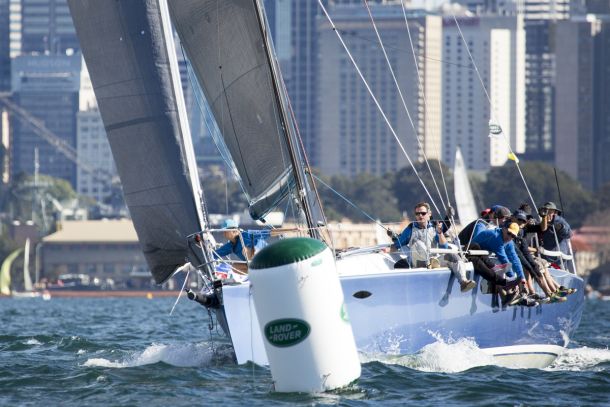 Huntress was the clear Division B winner in the 2015 CYCA Winter Series. Photo David Brogan

A long and light Race 10 of the Cruising Yacht Club of Australia’s Land Rover Winter Series provisionally decided the final pointscore outcome on Sydney Harbour on an icy day punctuated by dappled sunshine which gave the illusion of warmth.

Principal Race Officer, Denis Thompson, sent the yachts around the full course, giving most competitors one final chance of finishing on the podium ahead of the 2015 Land Rover Winter Series Prizegiving on Friday July 17, 2015.

However, not all 11 divisions were decided today. Philip Grove’s light wind flyer, Huntress, demolished the competition In Division B. The Sydney 39 cruiser racer was developed to fulfill a variety of conditions, but is at its best in the light winds that held sway for most of the series.

Grove admitted, “A rather big factor was the weather. Of the 10 races, eight were held in light to very light winds. People keep asking me who I’m paying to give me the right conditions,” said a laughing Groves who can count Airlie Beach and Hamilton Island Race Weeks among the striking blue boat’s victories.

Racing small boats such as Lasers in light air Singapore where he worked for years contributed to Groves’ success, as did his boat and crew.

“The main thing is the boat. I bought it from Sean Langman four years ago and it’s very good. He modified it and you almost imagine he set it up for light sailing,” Grove commented. “I have also stayed loyal to MacDiarmod Sails (now Doyle MacDiarmod). Shane Guanaria, the manager, sometimes sails with us and he and the sails have helped tremendously,” said Grove, who also praised his remaining crew.

Racing apart, Grove said he derived enjoyment from the ‘after party’. “Except for Cowes Week, I’ve never seen something quite so sociable as the after-race atmosphere at the CYCA. They really have it right. Everyone is so friendly – I really enjoy going back there after racing.”

Four Sydney 38’s fought for the remaining two podium places, just two points between them coming in. Buildrite/G&R Isuzu (Larkie Missiris) on 31 points, Richard Holstein’s Next on 32 points and Calibre (Richard Williams) and Utopia on 33. It was a coup for Sydney Yachts.

In the Duende versus Victoire battle for Division A1 honours, Damien Parkes sailed his JV52 to a win, to defeat Darryl Hodgkinson’s 2013 Rolex Sydney Hobart victor Victoire by four points after Hodgkinson ended the day in third place.

Despite not being on board, Tim Ryan was thrilled that his J70, James (with its AUS 007 sail number), won Division E victory in the hands of friend Peter Ryan today. It gave them a clear four-point victory over Jonathan Green’s Melges 32, Crusader.

Coming in to the day, Crusader, James and Skeeter were on equal 21 points, with Tigger one point behind. Sandor Tornai’s Farr 30, Skeeter, ultimately finished third overall on countback, while Tigger maintained fourth place, in this hotly contested division.

Tim Ryan said from France: “I entrusted the boat to Peter Ryan (no relation) to skipper. I’m in La Rochelle in France to sail in the J70 Worlds – please give him my congratulations.”

Back at the CYCA, Peter Ryan, who is normally on mainsail duties said: “Tim organised a pretty handy crew and I steered. We’re the smallest boat in the division, so we started earlier than our main competition. We must have done about 100 gybes between the Junction Buoy and Nielsen Park and played the eastern side of the Harbour – and it worked.

“When we got going again after the park-up, the bigger boats, including those in the running to win overall, ran us down and passed us. The only one we passed again was Skeeter. We didn’t think we’d won the race – so it’s amazing – and to win the series.

“We’ve won this Series three years in a row – I think that’s a record,” an obviously happy Jon Short said.

“A lot of our division didn’t race earlier in the series, which is a pity, because we’re very competitive. It became a match race, America’s Cup style, with Reve (Kevin Whelan’s Beneteau 45 F5). They were there every week.”

Describing the day, PRO Thompson said: “We got the first boats away in 5-8 westerly. It had dropped off to 5 knots by the time the last boats started. With the sun out, it looked spectacular as the yachts ran down with spinnakers towards Manly.

“Eventually the westerly evaporated and the fleet came together between Manly and Nielsen Park before a north-easterly wind started to trickle in. It had the effect of gathering the boats together, which meant they finished quickly in big clusters.”

“It was pretty exciting finishing. There were boats gybing towards each other trying for that last lunge at the line, calls of boat room and starboard – you could hear a lot of yelling going on,” Thompson ended.

Each week, one lucky division winner is drawn to receive a Land Rover Range Rover Evoque drive experience for a week and this week it was L’Attitude. “One of our crew will get to drive the Land Rover,” Jon Short said after being drawn.

“Every week the crew’s ambition has been to win the draw – they talk about it every week – we’ve got a few Land Rover enthusiasts on board,” Short said. “We’d like to say thanks to Land Rover for sponsoring the Winter Series – they’re an ideal sponsor.”

During the season, Tony Booth, the owner of Division F entrant, Selkie, won the Evoque Drive. “It was a fantastic experience to win,” Booth said. “One of my crew enjoyed the car. He was very grateful to have the privilege. He said the car was very smooth and a lot of fun to drive.”

A second draw is held weekly for a lift stand launch and two free laydays courtesy of the Noakes Group and that prize went to Division F’s Superfine (George Waldthausen), which won Race 10 today.

Next Sunday, July 12, the third and final race of the Ladies Day Series for the Chris Lee Trophy will close the Land Rover Winter Series.

Full results are provisional pending any protests and can be found at: http://www.cyca.com.au/sysfile/downloads/2015_winter/index.htm