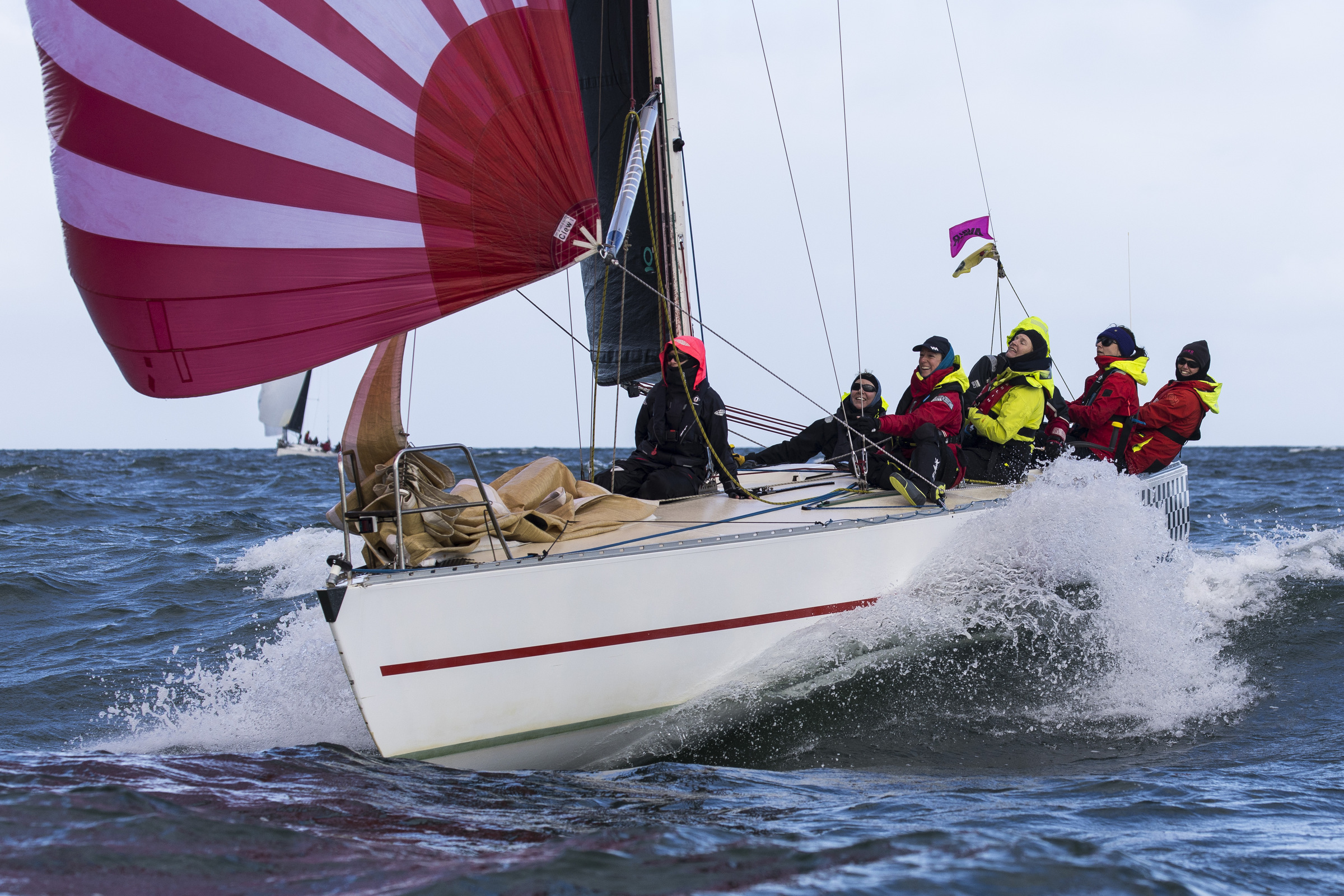 Royal Melbourne Yacht Squadron’s (RMYS) 30th Australian Women’s Keelboat Regatta (AWKR) came to an end on Port Phillip in Victoria this afternoon, when winners were crowned and other special prize recipients were announced.

Race Officer Lou Hutton held Race 6, the final of the series, on Port Phillip this morning in extremely light airs. It was a stark contrast to the preceding two days of racing when high winds and rough rolling seas tested all. She advised competitors this morning that the light breeze would not last the day, so the race was held this morning.

And so it was. Hutton got Division 1 away but was forced to abandon when the breeze shifted 30 degrees. A short time later, racing was underway in light patchy air and all finished their race.

The AWKR is scored under EHC. Tracy Richardson (NSW) and crew were the winners of Division 1 with the Adams 10, 2Xtreme, her name engraved on the inaugural Gail Clough Memorial Trophy.

Richardson’s 11th place in Race 6 was used as a drop, so she won on countback from the Clare Olding skippered Summit 35, Vertigo, from Royal Yacht Club of Victoria which won the final race in the six-race series.

“Conditions were very tough for us today. Not even hanging our weight to leeward helped us. The sea was much flatter, but it was a very frustrating race for us. We have no excuse. We tried to back the rig off before we went out but couldn’t do it,” said Richardson who also won ORC and placed second in AMS.

“I’m really proud of our crew. We started as novices together and we’ve really grown together. We are equal as a team and it is a team effort. My team carries me through.

“Congratulations to all, including Spartan (Jo Breen) whose crew sailed so well – they beat us for AMS overall.”

The Middle Harbour Yacht Club sailor added, “This event is incredibly well organised. The racing is good and the camaraderie onshore is great. We love the competition between the Adams 10s and the boat buoys who came out to the course with a replacement block for us – you don’t get that anywhere else. It’s a great regatta, we’ll be back next year.”

Tasmanian Jo Breen was thrilled to win AMS in Division 1 after having to retire from Race 3 with a broken main halyard. Her face lit up when she found out.

“It was challenging with the light winds and big shifts,” said Breen, whose entire crew is from the Derwent Sailing Squadron in Hobart. “We had everything from 2 to 7 knots,” she said after finishing the race in second place for her AMS win.

Division 2 was tight, with a trio of J70s filling out the top three places. Triple Olympian Karyn Gojnich (NSW) led the way by three points with Madness. Local RMYS yachtswoman, Monica Jones, was in second and Sarah Ladd, who along with Gojnich represents Royal Sydney Yacht Squadron, was a further two points away in third.

Gojnich prevailed, even though her fifth place today was used as the drop. The Jackal (Sarah Ladd) climbed to second overall, after winning the final race. Breaking the J70 stronghold, Michelle De Blaquiere helmed the J24, Gridlock, to second in Race 6 to claim the final podium place in Division 2.

The S80 division results came down to the wire, as Up ‘n Go (Cath Beaufort, RYCV) and Merak (Tanya Kelly, Royal Queensland Yacht Squadron) sparred for the top spot throughout, a lone point separating them going into the final race.

Like Gojnich in the J70, Beaufort’s throw away score was todays, but she still claimed the top spot in the S80 division. Merak fell out of contention, leaving the gate open for Sarah Clough, daughter of the AWKR founder, Gai Clough, to claim second place overall. Sophie Davidson, a 19 year-old contesting her first AWKR, skippered Vice Versa to third overall. Her fellow members at Royal South Australian Yacht Club will be very proud of her efforts.

“There were seconds at the finish between us and Merak today. We were obviously keeping an eye on them. We started together, then they tacked, then we fell in a hole. The breeze and they day were pretty much like that. I went inside another boat, which I shouldn’t have and Merak came through. Another 10 metres and they would have got us,” Beaufort said.

“This is my 21st Australian Women’s Keelboat Regatta. I did my first in 1998. Over the years I’ve seen the skill level rise so much. I love that is 100 percent women competing. It’s great to see so many women out on the water.

“I have pretty similar crew over the last few of these regattas. I have a pool of women who sail with me. I’m lucky like that. We have one Tasmanian on board,” ended Beaufort, who like almost half the fleet, owns her boat.

With the winning trophies handed out, the remaining trophies were awarded. The Rohan Brownlee Leadership and Endeavour awarded to a person who goes above and beyond for others and is inspirational to women at the event, went to Helen Willmer (Mrs Overnewton)

Novice Helm for a first time skipper at the AWKR went to Sarah Ladd (The Jackal).

Most Improved, for the skipper who most improves during the regatta, was awarded to Sophie Davidson (Vice Versa) who was crewed by university students.

The Sportsmanship Award went to Jo Breen (Spartan) after she stood by Jungle Juice after a crew member fell overboard.

Best Performed Owner/Skipper was awarded to Sal Balharrie, the owner skipper of the Sydney 38, No Man’s Land.

This is a unique event in every way, from the special prizes to the boat buoys who help with mooring, repairs and cooking the free barbecue each day, the relaxed atmosphere and sponsors, Doyle Sails Victoria; Culshaw Miller Badenoch Lawyers (courtesy of competitor

Rebecca Badenoch) who sponsored our famous Boat Buoys and post-race Boat Buoys BBQ. This makes it 15 years of her sponsorship.

Thanks also to Musto for the great prizes, She Sails and Hey Tomorrow Wines that competitors enjoyed after sailing each day.

Event Chairwoman, Kristen Buckland, was thanked and praised for all the hard work she put in again this year. Buckland works tirelessly to make this event the success it is, from sourcing sponsors, finding yachts to loan to crews, matching crews with owners, organising volunteers and more, including overseeing the event daily while crewing on the J70 Sequel and maintaining her composure!

In return, Buckland said, “We’re pleased to have competitors back from around the country. This regatta was all about getting back on the water after two years off lockdowns and it ended up better than we expected with numbers of competitors and the close racing.”

Full results in EHC, AMS and ORC and all information please visit: https://www.awkr.com.au