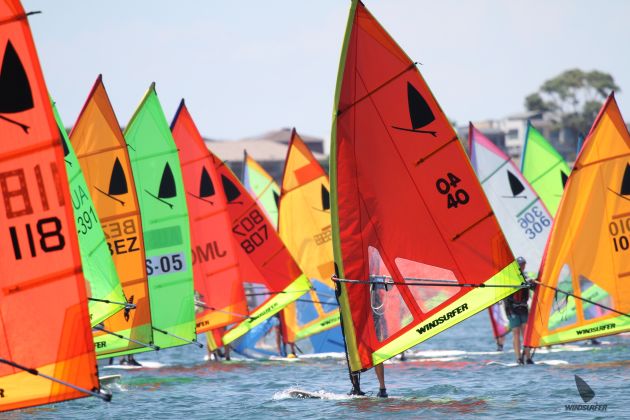 The Windsurfer One Design is the largest and strongest sailboard class in Australia. Its classic shape, based on the original Windsurfer, has trained some of Australia's best over the years and all of Australia's Olympic sailboarders have raced in the class.

Contested under hot and sunny skies, the fleet made a colourful sight with competition areas set close to shore which attracted great crowds of onlookers. Conditions provided something for everyone to strut their stuff – with breezes ranging from 5 – 18 knots across the racing period.

The event comprised 12 course races run over a windward/leeward format, the Freestyle which is a 3 minute trick routine, the fast and furious short course Slalom and a long distance Marathon.

Racing was tight up and down the course with a group of juniors battling with an experienced fleet that included a number of previous Australian champions. Young gun Will Grimshaw was a standout in the Youths.

The strong Victorian fleet based out of the host club put on a strong showing led by state champion Nick Bez who took out the Marathon, Slalom and medium course racing to win the overall men’s Pentathlon title.

In the women’s NSW speedster Mel Webb dominated in all disciplines and mixed it up with the top men to comfortably take the overall.