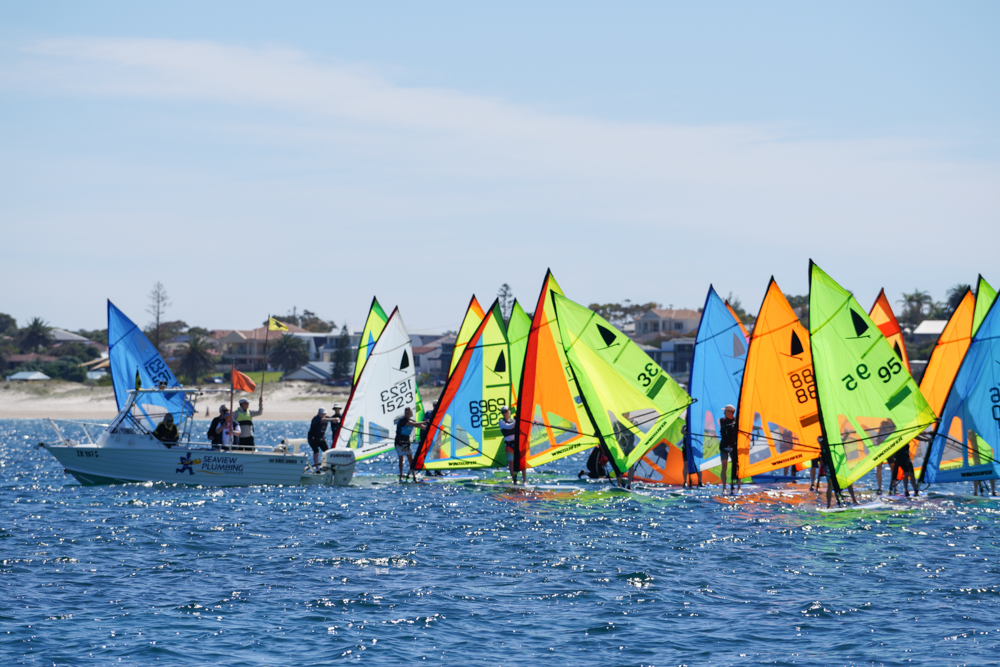 Windsurfers line up for a start.

Despite the challenges water sports events have faced throughout the Covid pandemic, the Windsurfer Class of Australia continues to buck the trend with growing participation across the country and a return to national racing this season that will see more than 90 entries in the upcoming nationals.

The 2021/22 Windsurfer Australian Championships, following a year off, is set to go ahead at the Parkdale Yacht Club in Melbourne’s bayside area from 19-23 January, with a large and diverse fleet of competitors attending from across Australia.

Australian Windsurfer Class representative Tim Lelliott said the class had remained strong throughout the last two years due to a class mantra focused on developing a culture of camaraderie and affordability.

“It’s such a fantastic class and it’s one of the largest growing classes globally,” he said.

“The class can accommodate anyone, it’s about good times on the water and good times off the water, so we’re a family and we encourage new people at any level and everyone embraces them and brings them into the class – so it’s a great sport to be in.”

The upcoming national championships will be run out of the newly-refurbished Parkdale Yacht Club, Melbourne’s mecca for one-design windsurfer racing, which will serve as a great access point for spectators and visitors alike to enjoy the event.

“The Windsurfer class is super excited to get the fleet to the brand new Parkdale Yacht Club on Port Phillip Bay in Victoria – it is a great venue to showcase the racing,” Australian Class President Nick Bez said.

“The viewing deck set over the sand and courses set close to shore means spectators will have a fantastic up-close look at the action.”

With a wide range of competitors, the event will bring together an impressive cohort of people from all ages and backgrounds.

The majority of the fleet will attend from Victoria and New South Wales, with the remainder of competitors representing Queensland, South Australia, the Australian Capital Territory and Tasmania.

Australian Class President Nick Bez said that there were strong contingents of competitors in Western Australia, South Australia and Queensland that were participating in local events and were hoping to attend the nationals but decided to miss out this year due to ongoing uncertainty around border restrictions.

“Given everything that’s going on in Australia and the last two years we’ve had, this fleet size is still a really great result for the class and undoubtedly will be one of the biggest single class regattas in the country this summer,” he said.

“It goes to show how keen everyone is to get back on the water and get back to competing in major events.”

There are already 10 females entered, roughly 11 per cent of the fleet, while the youngest competitor is 14 and the oldest is 77 – showing how this class really appeals to all ages and backgrounds.

The event kicks off with registration and practice day on 19 January, followed by four days of competition from 20-23 January.

For more information, head to: www.windsurferclassaus.com/national-championships